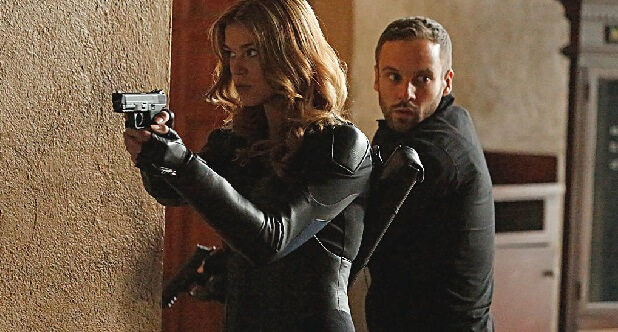 When it debuted in 2013, expectations could not have been higher for Marvel’s first television show in the MCU, “Agents of S.H.I.E.L.D.” Not only was Marvel fresh off the release of “Iron Man 3” and “Marvel’s The Avengers,” but they were bringing back Clark Gregg’s Agent Phil Coulson to headline the show. With expectations so high, the let down that many felt was not overly surprising. While the first season struggled to find a tone, the show dramatically improved following the events of “Captain America: Winter Soldier” with the help of great guest appearances (Bill Paxton, Patton Oswalt), and better plot-lines, the show picked up on the tail-end of Season 1.

The following season, as Coulson set out to rebuild S.H.I.E.L.D., the series added two new regulars that helped the show in a big way.  The additions of Nick Blood as Lance Hunter and Adrianne Palicki as Mockingbird/Bobbi Morse brought a new level of excitement and espionage to the spy show. The two characters proved so popular that many thought a spinoff would allow each of the actors to provide more background on the characters and expand the MCU in a unique way.

Apparently, ABC is buying in on that premise, at least enough to greenlight a pilot for the show. IGN is reporting that ABC President of television Paul Lee commented on the show at the 2016 winter Television Critics Association press tour. As Lee put it, “We’re absolutely doing that one. I just announced that we’re going to pilot on Marvel’s Most Wanted, which is a spinoff.” For anyone unaware of the two characters, Bobbi Morse and Lance Hunter are not only spies/soldiers who work for S.H.I.E.L.D. under Coulson, but were once married before the events of “The Avengers.” It was revealed through Season 2 of A.O.S. that Morse’s commitment to S.H.I.E.L.D. caused such a rift in their relationship that it actually caused them to divorce. While Hunter made numerous jokes about his ex-wife in many of season 2’s early episodes, the show waited to reveal who it was until Morse had to break her undercover status to save Simmons from HYDRA. The two characters witty banter and complex relationship was a large part of why A.O.S. received such a jump in quality during season 2, and now that the series has reached an acceptable level for ratings, it is unsurprising to see they would get a shot to headline their own series. Frankly, they overshadowed many of the characters on the series for some time, and until the Secret Inhumans storyline really took off, it would have been difficult to let them go. Now the show has so many new characters and plots to self-sustain, their leaving would be great to anyone who wishes to see them get more screen time. Another note that makes Bobbi Morse such an interesting character for a spinoff would be the potential introduction of Clint Barnes a.k.a. Hawkeye (Jeremy Renner) as a potential love interest. While it is extremely unlikely that Marvel or Disney would approve of Hawkeye leaving his wife and children for Morse, the possibility of seeing the two on screen at the same time would be interesting in its own right. If “Marvel’s Most Wanted” does get a full season, of even limited season (11) greenlight, it would seem like the team-up would become more likely. There is also the interesting angle here in regards to the future of Marvel Television. In addition to ultra-violent and gritty Netflix series (“Daredevil,” “Jessica Jones” with more on the way), this marks ABC’s third superhero show (A.O.S. and “Agent Carter”). While “Agent Carter” is only a limited run series in the spring, often filling in A.O.S.’s break, would “Marvel’s Most Wanted” function in the same way, or would it run a full 22 episodes? Or worse, could it be a potential safeguard to replace “Agent Carter” if ratings do not improve? Time will tell, with the “Agent Carter” premiere in just over a week.

“Marvel’s Most Wanted” is heading to pilot with no firm dates for a premiere yet. It would star Adrianne Palicki and Nick Blood.