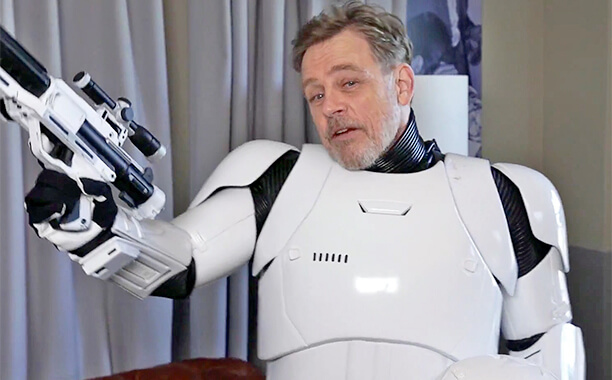 In a stunt reminiscent of both Harrison Ford’s recent surprise Skype chats with Star Wars fans and Arnold Schwarzenegger’s real-life Terminator prank, Mark Hamill recently took to the streets of Hollywood dressed in a “Star Wars” costume– not as Luke Skywalker, but as a First Order Stormtrooper from the new movie “The Force Awakens,” which opens worldwide in two weeks.

The move was an effort to promote Lucasfilm’s Force for Change charity and a contest to win tickets to the film’s premiere by donating at least $10. The video contains several humorous moments of Hamill interacting with fans and passersby on the street who are unaware of the true identity of the man behind the mask, and even a point where he examines a “Force Awakens” poster hanging outside the El Capitan Theatre and shrugs when he can’t find himself.

Comments Off on VIDEO: Mark Hamill dressed as a First Order Stormtrooper in public to promote “Star Wars” charity