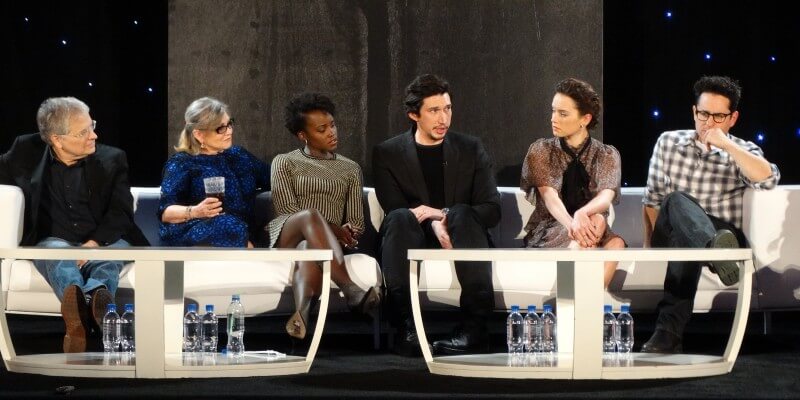 As we approach the release week of “Star Wars: The Force Awakens,” it’s beginning to feel like just about everything that can be said about the movie, without spoiling too much, has already been said. The cast and creative team has done innumerable interviews at this point, and have been featured on the cover of almost every major magazine. The merchandise has flooded the market, the trailers and television spots have been scrutinized to the point of exhaustion, and pretty much every possible avenue for pre-release discussion and fan theories has been explored.

To put it mildly, we’re ready to see this thing. But there are still ten whole days to go until we, the fans, get to sit down in the theater and drink it all in (the gala premiere will be held in Hollywood several days prior to the December 18th release date.) And so, a select group of press gathered in Downtown Los Angeles this weekend for one last push: a moderately-sized but intimate press conference featuring most of the major stars of “The Force Awakens” (sans Mark Hamill, of course, who has been conspicuously and notably absent from most of the movie’s promotional materials for such a key player) and its director, co-writer, and producer. The team was separated into two groups who were then collectively interviewed by self-labeled unlikely moderator Mindy Kaling of “The Mindy Project” and Disney/Pixar’s “Inside Out,” who assured the audience, “I actually am a ‘Star Wars’ fan… I think it defies genres… the characters are better than any romantic comedy you could watch, it’s an action movie, it’s a buddy movie, there’s interspecies friendships… it really has everything.”

The first group was made up of screenwriter Lawrence Kasdan (who previously collaborated with George Lucas on “The Empire Strikes Back,” “Return of the Jedi,” and “Raiders of the Lost Ark”– not a bad résumé), the always-affable Carrie Fisher (General Leia Organa), Lupita Nyong’o (who performs the motion-capture pirate character Maz Kanata), Adam Driver (the dark-side worshipper Kylo Ren) Daisy Ridley (the mysterious scavenger Rey), and director J.J. Abrams, whose last feature projects were the successful relaunch of the “Star Trek” movie series and the Steven Spielberg pastiche “Super 8”– so it makes sense that he was approached multiple times to come aboard the “Star Wars” ship by Lucasfilm president Kathleen Kennedy. When asked on stage by Kaling why he finally said yes, Abrams replied, “Here’s the thing: this is a project that I felt incredibly lucky to be asked to be a part of, and I think I speak for all of us… when I say this was not a job… it was nothing that any one of us took on because it was a gig that was available… I do honestly feel honored to be a part of this group.” Addressing Adam Driver, Kaling compared his character Kylo Ren to Robert De Niro’s Rupert Pupkin in Martin Scorsese’s “The King of Comedy.” Driver appreciated the observation, remarking about Ren, “he’s very unpolished and unfinished… people associate the Dark Side with being organized, and very in control and calm.” Kasdan added, “That’s why we were so excited about Adam playing this character. There’s never been a character like Kylo in the saga.”

Turning to Nyong’o, Kaling asked her to compare working in a theatrical play to the solitary experience of performing a motion-capture character. “Fortunately for me, J.J. had me be a part of principle photography, so my very first experience with motion capture was on the actual set, with the actual actors. So I’m eternally grateful to him for giving me that.” Daisy Ridley was asked if she had a warm-up song in mind for her character during the production of the movie. “I actually have one… and not to advertise Disney any more, but it’s Mulan– ‘I’ll Make a Man Out of You.’ I used to play it in the trailer before I went on.” She then treated the crowd to a line from the song. “It’s iconic, guys!”

Once the forum was opened up to the floor, an attendee asked J.J. Abrams “What was the most important thing to bring to ‘The Force Awakens’ from the original trilogy, to you?” Abrams replied, “When Kathleen Kennedy and Larry [Kasdan] and I started talking about what this was at the very beginning, the fundamental question was ‘What do we want to feel? And what do we want people to feel when they came to this movie?’ And… the answer was the kind of sense of discovery, exhilaration, suprise, the comedy that George Lucas put into ‘Star Wars’… when you look at all the things he got right it’s impossible, and stunning. And so for us… it was really about knowing why we’re telling the story, and it was to give people that sense of possibility and magic that we all felt when we first saw the original.” Abrams also revealed that “The Force Awakens” will not contain an “Easter Egg” scene at the end of its credits, a phenomenon for which Disney’s Marvel franchise has become known. “All of the scenes are in the movie,” he wisecracked.

Carrie Fisher was asked to talk about bringing girl power to the original trilogy, and how she might relate her experience to Daisy Ridley. “I am the beginning of girl power,” Fisher jokingly began, “No, I got to be the only girl on a all-boys set, which was really fun… [Rey] is more powerful than me, but I’m louder than [her]! So she takes on the physical power [in battle], and I scream at them until they pass out.” After that round of questions was completed, the stage was cleared and a second group of actors was brought out with the aforementioned Kathleen Kennedy. This final panel included Oscar Isaac (who plays Resistance fighter pilot Poe Dameron in “The Force Awakens”), Gwendoline Christie (the chrome-plated Stormtrooper commander Captain Phasma), John Boyega (ex-Stormtrooper and co-lead character Finn), and the legendary Harrison Ford, who reprises his role as the fan-favorite rogue smuggler Han Solo for the first time in more than thirty years. Kaling’s first question to Ford echoed what she’d asked Abrams during the previous session: “Aren’t you rich? Why are you doing this?” And Ford gave his standard response, reinforcing his devotion to the craft of acting, “It’s because it’s what I do. It’s what I like to do. It’s what’s fun for me. And I had a chance to work with people who I really admire, doing something that I thought was gonna be fun. And which actually turned out to be fun. And to work with J.J…. it seemed like a good idea.” “Are you excited about this?” Kaling inquired of John Boyega, another young newcomer to “Star Wars”, though his role in the cult sci-fi action/comedy “Attack the Block” brought him attention from a similar crowd. “Yes, yes. I’m looking to be rich like Harrison,” he quipped to a burst of laughter from the crowd. “I’m trying to have planes and do all that stuff, so… absolutely.”

Boyega went on to a bit more serious a response: “This is a movie about human beings, about Wookiees, spaceships, and TIE Fighters, and it has an undertone and a message of courage and a message of friendship and loyalty, and I think that is something that is ultimately important.” He also remarked on what it was like returning to the character of Finn for some of Disney’s ancillary “Star Wars” experiences: “I’ve had to go back twice, once for Disney Infinity and the second time for Star Tours, the ride at Disneyland, and it’s been– to be a playable character, I get to play with myself! But it’s been amazing, it’s been fun, and the characters in Disney Infinity are more of the childlike versions of the characters in the movie, so that was very cool.” Gwendoline Christie (known mostly for her role as the towering Brienne of Tarth on HBO’s “Game of Thrones”) was asked what other existing “Star Wars” role (besides Captain Phasma) she would like to have played. “That’s tough… a character I don’t really think I would particularly be suited to, but would definitely like to play is, of course, Han Solo… I might just have a modicum of swagger, as opposed to the Grand Canyon that’s at the end of the sofa.” Oscar Isaac was asked whose trailer he hung out in the most during production, besides his own, and he told a funny story: “My uncle came to visit– huge ‘Star Wars’ fan, he’s so obsessed with ‘Star Wars’– and I lost him. I couldn’t find him, and I heard all of this laughter coming out of Carrie [Fisher]’s trailer and he was there with Gary Fisher — her dog — just hanging out with them.” By the time it came to wrap up, everyone seemed to have had a good time. Kaling managed to keep the interviews fresh and the subjects supplied with unique questions, and the press left excited to see the movie, although advance screenings are unsurprisingly not being offered in order to keep the film’s secrets under wraps.

It was an exciting day, and certainly a thrill to be in the same room with the cast and creative team behind such a highly-anticipated movie. And now there’s just a little over one week to go until we find out whether or not that anticipation will pay off…