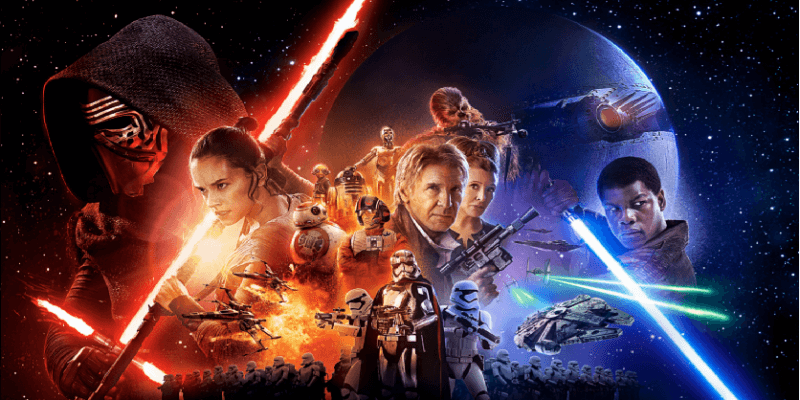 With the Golden Globes and Screen Actors Guild awards past, there were many who believed that “Star Wars: The Force Awakens” was not a player for Best Picture. While many would have loved to see it show up, the franchise has not been recognized in the Best Picture race since 1977. In fact, “A New Hope” received awards for score, editing, sound effects, visual effects, and even best costume design. After Tuesday, the franchise may be in play for those categories, and even more. The American Film Institute was the first awards group to announce its feelings on the film since the debut. Their choices for the Top 10 films of the year included two Disney features, “Star Wars: The Force Awakens” and “Inside Out.” They also selected “Bridge of Spies,” a film distributed by Disney. It is important to remind ourselves that this is just one group, but I’m not the only one who realizes how big the film could play with the Academy.

The always awesome Scott Feinberg explains in THR that the film could realistically score on a lot of ballots, and seems to be universally loved by those in Hollywood. He cites some stars like Rob Lowe and Elizabeth Banks have already been extremely impressed by the film, and in all honesty, it may be the most seen film by the Academy in 2015. For many voters, who have to pick and choose which films they see over the holidays, the fact that “Star Wars” is a zeitgeist-driven, cultural phenomenon makes it even more likely to be seen. Furthermore, with the franchise spanning over four decades, almost all of the Academy’s membership have some connection to the franchise. While science fiction films, such as “The Martian” are tough sells for the Academy, “Star Wars” has cross-generational appeal that should help it. Feinberg even believes there could be support for J.J. Abrams for Best Director, simply for reviving a seemingly broken franchise. “Star Wars: The Force Awakens” is also in an unusual spot because it was not released until after the Globes or SAGs were announced. In all fairness, those groups hadn’t seen the film, so how could they nominate it? In years past, films such as “The Wolf of Wall Street” have been able to circumvent both awards and still be real players in the Oscar race. Could we see the same for Star Wars? One would say that change is already taking place.

The Hollywood Reporter revealed on December 22nd that the Broadcast Film Critics Association added “Star Wars” to the Best Picture race after their votes had already been cast. Spokesmen for the awards noted it was only eligible to be added to the Best Picture race, making it the first time the organization chose to add a film since “Cast Away” in 2000. This was huge for Disney, and with “Star Wars” sitting on a 94% via Rotten Tomatoes (which makes it the 3rd highest score for adjusted score eligible for the 2016 Oscars) the film could make a real push for Best Picture. The launch of the “For Your Consideration” page certainly seems ambitious, and will already be forced to amend itself (Star Wars was not a finalist for Makeup & Hairstyling). The acting categories seem like a stretch too, with Ford likely the best chance in an overcrowded field for supporting actor.  Best Original Score feels like a lock for John Williams, as does visual effects, and both of the sound categories. My guess is the film tops out with somewhere around 6 nominations, with Best Picture, costuming, and cinematography realistically in play. All in all, “Star Wars” is looking to greatly upset the balance of the Oscars, as franchise films rarely get a chance to become real award players. With the film quickly gaining more money in the box office (already the 3rd highest grossing film of 2015), it’s going to be around to stay for the foreseeable future. It’ll be interesting to see where it lands in the Oscar race, as well as the all-time box office record.