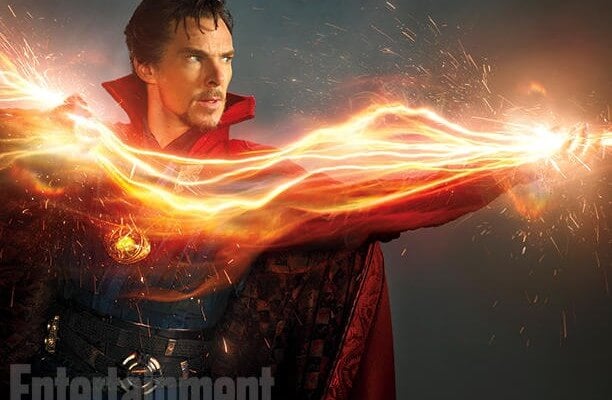 Principal photography for the new Marvel superhero film “Doctor Strange” has only recently begun last month with a planned release date for next November, but we’re already being treated to an early look at the film with Entertainment Weekly featuring Benedict Cumberbatch in full costume on the cover of their new “First Look” double issue. The movie isn’t set to wrap until March, and the photo shoot for EW was so early in the process that Cumberbatch took the opportunity to test out new character movements and gestures to prepare for the role.

“I’m still in the infancy of learning all that,” Cumberbatch told EW in an interview for the issue. “It was like, okay, I’ve got to keep throwing these poses, these spells, these rune-casting things, everything he does physically. I’m thinking, there’s going to be a huge amount of speculation and intrigue over the positioning of that finger as opposed to it being there, or there. And I’m still working on that. We haven’t played any of those scenes yet. I felt really self-conscious. But, then, by the end, it was great. It’s like anything, you just have to experiment.” Among the news that EW is exclusively reporting is that “Hannibal” star Mads Mikkelsen will be the main villain. Though his actual name was not revealed (because it supposedly hasn’t been decided on yet), he will be playing a fellow sorcerer who “breaks off into his own sect” according to the film producers.

Concept art, including a revealing look at The Chamber of Relics, are also included in the new issue.