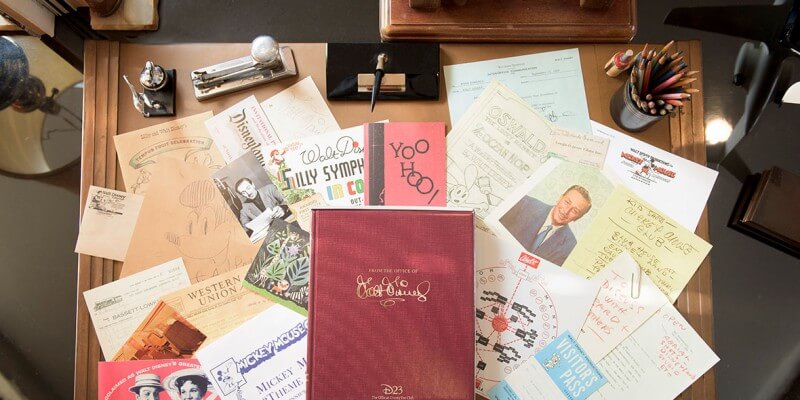 For those that are renewing or joining the ranks of D23 Gold Members for 2016, a special Walt Disney-inspired gift will soon be on its way.

Housed within a box made to look like a book, “From The Office of Walt Disney” features 23 incredibly accurate reproductions of items from Disney’s office, which has been painstakingly restored and is now housed at the Walt Disney Studios’ Burbank lot. Items include a 1923 Laugh-O-gram Films Inc business card, a “Mary Poppins” promotional piece, postcards, a 1928 telegram from Walt to his brother Roy after he lost the rights to Oswald the Lucky Rabbit, reproductions of press passes and invitations, along with much more.

For photos and descriptions of all the items included in this exclusive box set, fans are encouraged to visit D23.com/OfficeOfWaltDisney for all the details. The site will soon also offer videos detailing the story behind each of the artifacts. Gold Members can also take part in special tours of Walt Disney’s office in 2016, among many other perks.

D23 Gold Memberships are available for $74.99, as well as a Gold Family Membership for $99.99 and General Membership (complimentary) at D23.com and at DisneyStore.com/D23. “From the Office of Walt Disney” will be sent to all D23 Gold and Gold Family Members who join or renew from January 1 through December 31, 2016.