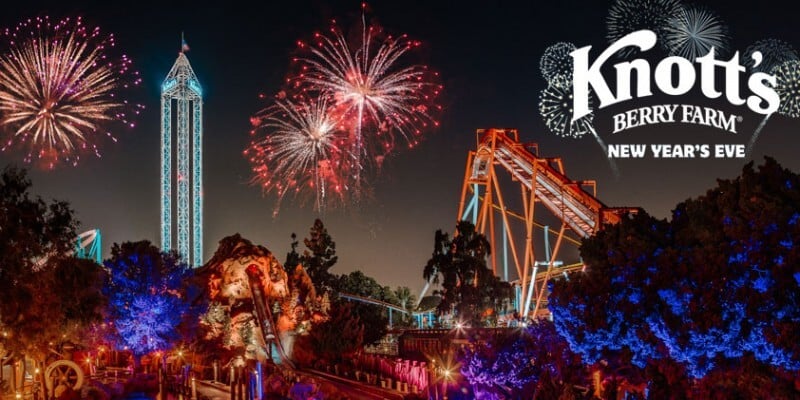 With New Year’s Eve 2016 coming up this week, theme park fans in Southern California have several options when deciding how to ring in the new year. Let’s take a look at what’s happening at the parks in the area.

Disneyland will be featuring the special “Fantasy in the Sky” fireworks show twice on New Year’s Eve, with the first show at 9:00 PM and the second at midnight. Disneyland’s official site describes the show as “eye-popping excitement” and a great way to “start the New Year with a breathtaking bang as inspiring music and astonishing pyrotechnics fill the air.”

And of course Disneyland offers special New Year’s Eve hours: the park will be open from 8:00 AM until 2:00 AM the following morning, with Extra Magic Hours (for Disneyland Resort hotel guests) and Magic Morning (for guests with advance three-or-more day tickets) beginning at 7:00 AM.

Disney California Adventure will similarly be open much later than usual, with that park’s New Year’s Eve hours being 8:00 AM-1:00 AM, with the Extra Magic Hour also beginning at 7:00 AM.

Universal’s New Year’s options are extremely limited this year, with the park’s gates closing at 9:00 PM and the usual outdoor celebration at Universal CityWalk‘s Five Towers unavailable for reasons that have not been made public. However, a few of CityWalk’s more popular bars and clubs, such as Howl at the Moon and the Saddle Ranch Chop House, will be hosting New Year’s Eve parties with cover charges. And the Universal Hilton will be home to a “Pop-Rockin’ Celebration” starring Belinda Carlisle.

Knott’s has plenty of fun entertainment planned for this New Year’s Eve, including everything that’s currently available at the Knott’s Merry Farm holiday celebration, plus several unique-to-New-Year’s performances and a special holiday fireworks display at midnight along with a dramatic display on the famous rotating Sky Cabin.

The park will be open from 10:00 AM until 1:00 AM on New Year’s Eve  and the celebration is included with regular daytime admission, or if you purchase a Knott’s 2016 season pass for use on that day.

Unfortunately, it seems as though neither Six Flags Magic Mountain nor Legoland nor SeaWorld San Diego are offering any New Year’s Eve nighttime activities this year. So your best bet is either Disneyland Resort or Knott’s Berry Farm if you want to be at a theme park at the strike of midnight, or Universal CityWalk if you want to be at a more adult-oriented party near a theme park for the big moment.

However you decide to spend your evening on December 31st, have a very happy and safe New Year!