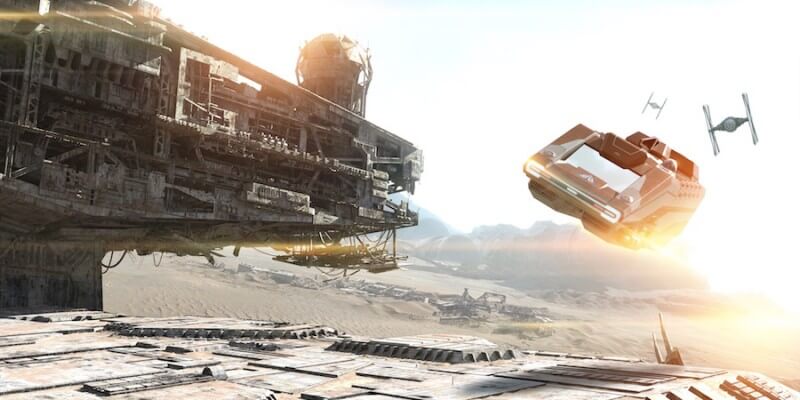 Although it was rumored to be a possibility, it’s still a bit of a surprise to hear that Disney is indeed axing the popular “Star Wars Weekends” annual event. As they put it, the Force will soon be with Hollywood Studios every day with the new events and the upcoming 14-acre Star Wars Land (scheduled to break ground next year). It’s still a bummer as it was a fun way for fans to gather together in their mutual love for the franchise and enjoy special events.

On the bright side, a new destination at Star Tours based on the upcoming “Star Wars: The Force Awakens” will pop up in December and will be available to all riders immediately before it’s put in normal rotation with the other destinations.

Here’s a sneak peek of what to expect on the new planet of Jakku, where the Starspeeder 1000 seems to be tagging along for the ride as TIE Fighters chase the Millennium Falcon in a scene we’ve seen already in the movie trailers. How this meshes with the rest of the attraction, which contains elements from the entire saga that took place years ago in the Star Wars timeline, remains to be (eagerly) seen.

Star Wars Launch Bay will also open and will feature special exhibits and memorabilia and merchandise from the movies. It will also have meet and greet opportunities with Darth Vader and Chewbacca.

“Star Wars: Path of the Jedi” presentation will help educate guests on the power of the Force by including scenes from the entire saga.

The newly enhanced “Jedi Training: Trials of the Temple” will also be open at some point by early December. A new site for the training session will now take place in an ancient Jedi temple where they will once again face Darth Vader, but he will also have an evil ally named the Seventh Sister — a new villain from the Disney XD series “Star Wars Rebels”.