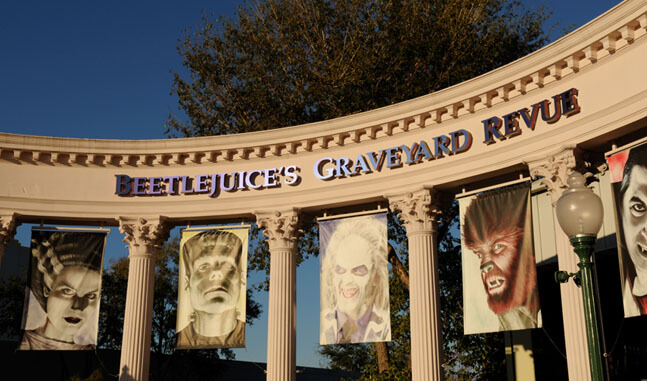 Say his name three times as quick as you can, because Beetlejuice’s Graveyard Revue is closing on December 3rd.

A few weeks back when the announcement came for the closure of Disaster: A Major Motion Picture starring You, it was shared that the long running (in some form) Beetlejuice Graveyard Revue would also be parting ways with the world of the living, in time for the 2017 addition of the “Fast & Furious – Supercharged” attraction. Universal has been rapidly improving the dynamics of its Orlando resort with additions to both parks, increased hotel room capacity, and additional dining and entreatment offerings at CityWalk, so it comes to no surprise that another case of “out with the old, in with the new” is taking place with Beetlejuice. The show has been a part of the Universal Studios park since May of 1992, always finding a home in the San Francisco area of the park, and undergoing about four different versions of the show by the time it closes permanently.

In its current form, the show is still hosted by Beetlejuice, and includes the classic Universal Monsters Dracula, The Wolfman, Frankenstein and his Bride. The Phantom of the Opera’s daughter Phantasia and Egyptian queen Cleopatra are also along for the show. The show is musical celebration of all things rock, with a gothic underlying theme that’s safe for all ages, but includes some elements that may spook the little ones (pyrotechnics). It’s fun, it’s whacky, and doesn’t always make sense but thats ok… because its Beetlejuice; and he would’t have it any other way.

He’s the ghost with the most, so go ahead and make your millennium by seeing Beetlejuice’s Graveyard Revue once more, and be sure to continue to follow Inside the Magic. We’ll be bringing you more updates as his expiration date gets closer.