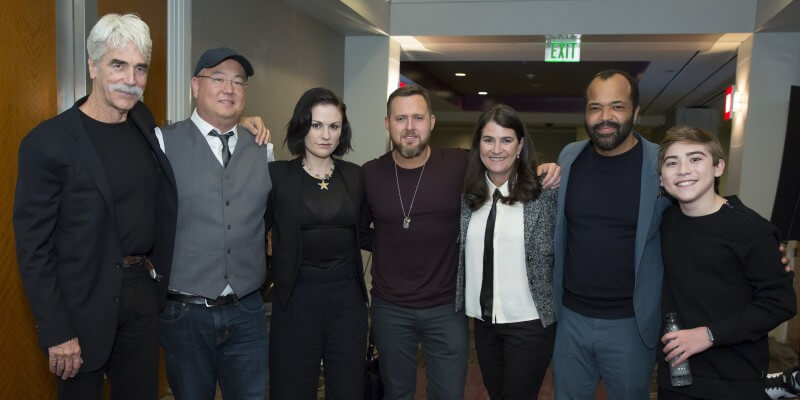 Last week we had the pleasure of sitting down with the cast, director, and producer of “The Good Dinosaur” in a series of roundtable interviews that covered the development, production, and release of the new Disney/Pixar feature. We also discussed “Sanjay’s Super Team,” the short that precedes “The Good Dinosaur” in theaters, which was represented by its director and producer.

Peter Sohn, the director of “The Good Dinosaur,” was paired with producer Denise Ream for the interviews and they talked about what genres of film influenced the movie, and how they settled on the idea of the main family of dinosaurs being farmers. “When we first came up with the project, it was kind of Western-infused, and so we started down that route in the evolution of this film.  But when we had the saloon owner, we had, like, miners… It just didn’t work, because it felt like we were making fun of Westerns, and I loved — I grew up on the American West of these movies that raised me,” Sohn explained.

“And, so I asked the guys, ‘Let’s keep pulling back and trying to find — what are we saying about the frontier?’ And so the more about that we looked in was the idea of surviving out there, because when we did the research out there, there were so many times, you’re like, ‘People made it across here — American people made it across this tough country to kind of learn to survive.'”

When asked about cinematographer Sharon Calahan, who helped bring to life the incredibly realistic wilderness landscapes in the movie, Ream gushed that she was “just so excited to work with her… she’s creatively and artistically beautiful — I mean, logically, she knew the physics breakdown, how things work, [that’s] incredible, as well.”

“Our story artists would draw a situation that, knowing that there wasn’t a lot of dialogue, that we would kind of rely on the background and the world, and draw something rough. And then [Sharon] would take hose board drawings and start painting over them what she knew of the world.”

I wanted to ask about some of the more “out-there” sequences in the movie, especially the interaction between Arlo and the (Sohn Voiced) Pet Collector scene and the trippy “rotten berries” scene. Sohn replied, “Every character that Arlo meets was all in terms of support of Arlo’s journey.  In terms of the world, of the frontier, that he was kind of this like a transient character that’s been living out in the woods too long… and in terms of the berries, that was all a bit about some of the research that we did, and exploring every kind of thing that nature does, from flash floods, to getting your foot stuck in a rock. We would hear all of these stories. And we saw some footage of some animals, like, eating fermented fruits, and like, “Oh my God, this is so funny.”

Up next was the pairing of Raymond Ochoa (the lead Apatosaur Arlo) and Jeffrey Wright, who played his father Poppa. Wright discussed how it felt to be involved with a Pixar movie: “In that I live vicariously through these things with my children, it was intensely exciting for me because it was so for them… beyond the popularity of the movies and, the prominence that they have for kids my kids’ age and Raymond’s age now, they are really good stories.  It’s really become, seriously well-considered storytelling. And the themes of this one, which are so universal and fairly obvious around parenthood and family and love and responsibility and nurturing, all of these things are so resonant, so that’s really very gratifying to be a part of.” Ochoa talked about the difference between acting in a live-action movie versus a voice-over performance. “I really don’t think there is [a difference].  Because, when I go into a voiceover booth, it’s more like me just talking and me doing the gestures as well.  It’s not just me just talking in front of a mic.  Which I think a lot of people don’t understand.  But it’s just how I do it, and it makes me be able to bring out more emotion than — rather than just talking and being sad.”

Next was the group of actors who portrayed the trio of Tyrannosaurus Rex ranchers in the movie: Sam Elliott, Anna Paquin, and A.J. Buckley. Elliott remarked on the T-Rex characters and how they relate to the themes of “The Good Dinosaur” as a whole. “They’re not typical of any T-Rex that’s ever been represented on film or in animation that I’m privy to. I think that’s part of the charm of this thing. Certainly all of the overriding themes that are involved, and whether it’s the T-Rexes or the kid on his journey, this is about real life.” “There’s a lot of themes in here that ring true for families and parents and children.  And there’s great things to be taken away from this. I mean, it’s one thing to be able to entertain people, and we’re blessed ’cause we get to do that, I’ve always felt. But it’s another thing, to inform people, or to provoke people, or make them think. ”

Paquin was asked if she had racked up any “cool points” with her kids for having acted in a Pixar movie. “I won’t know till the movie comes out, ’cause then the real cool points will start racking up.  I mean, aside from the fact that I’d always loved Pixar, and had been sort of trying to figure out how to get them to want to hire me, and then it kind of just happened, and I was like, ‘That’s really cool and awesome, and sort of spooky.’ Yeah. It definitely gives me good street cred as a mom, you know?”

A.J. Buckley was asked about what it was like to work with Peter Sohn as a director. “[Peter is] sort of the captain of the team, and has really sort of set the tone… that’s who he is. He’s a really genuine guy who really cares about the work. It’s rare to find people like that in this business, and in this world.  So he’s a special guy.”

Lastly, we were introduced to Sanjay Patel, the director of the short “Sanjay’s Super Team” (the story of a young Indian boy who intermingles his love of superheroes with his immigrant father’s devotion to Hinduism,) along with producer Nicole Grindle. Grindle explains how the project got its start: “Sanjay has written a number of books. He’s been at Pixar for 20 years, doing traditional Pixar animation, art, but over the years, he developed an interest in pursuing South Asian art and learning more about his culture, and that led to him writing these books, and that led to there being several shows of his work at the Asian Art Museum.”

“And eventually some folks at Pixar sort of figured he was doing all of this cool stuff. And they said, ‘Oh.  Let’s bring your artwork in-house. Let’s do a show at Pixar.’ We do that every now and then. And when we did that, John Lasseter saw this show, this beautiful artwork, and said, ‘Sanjay, you have to make a short film.’ That’s not usually how short films are chosen at Pixar. People don’t usually get invited. So, Sanjay was invited to do this and he said, ‘No,’ at first.  He didn’t want to do it, it wasn’t what he had set out to do.” Then we made the short,” Patel continued from there. “It does seem that there’s a lot more interest in, I think, stories told from different places. I mean, obviously, that’s what we’re all talking about right now… and I’m particularly interested in those myths that I didn’t know about. So that part of the world is really fascinating to me.”

“The Good Dinosaur” and “Sanjay’s Super Team” are now playing together nationwide.

Comments Off on “The Good Dinosaur” cast, creative team discuss the movie and what it’s like working for Pixar