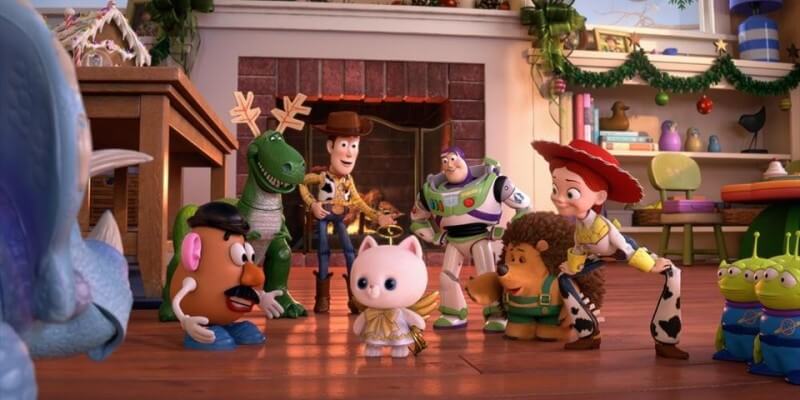 “Toy Story” fans will have to wait until 2018 for “Toy Story 4” to come out, but they were treated to a holiday ABC TV special featuring the whole gang last year on December 2, 2014 and now it’s being released on Blu-ray to enjoy again and again.

At 22 minutes, “Toy Story That Time Forgot” may feel like it ends too quickly, especially without the original commercial breaks that divides the special into three acts, but it’s packed with heartwarming and laugh-at-loud moments and the Blu-ray has a decent collection of extras to explore. Even with its brevity, it still took nearly three years to make and features new characters mixed in with several returning characters from “Toy Story 3”, so rest assured the Disney-Pixar charm and wit that has always infused the “Toy Story” franchise remains intact.

The plot centers not on Buzz and Woody but on Trixie, the lovable triceratops voiced by Kristen Schaal that was introduced in Toy Story 3. Disappointed by the fact that she can’t unleash her inner dinosaur with her owner Bonnie, she gets to break out and be herself at the home of Bonnie’s friend, Mason. There, some of the gang meets up with the fearsome warrior Reptillus Maximus, one of the leaders along with The Cleric of The Battlesaurs, of which Mason has just been gifted the entire collection for Christmas. They haven’t been played yet by Mason, who is preferring to play with a new video game system elsewhere. The parallels between these new toys and Buzz back in first Toy Story are made clear, especially with Buzz cracking a joke about it, but it still feels like a fresh take on it with so many new characters, including a humorous Christmas ornament named Angel Kitty, and Bonnie getting a chance to shine.

As is the case with any Disney Pixar Blu-ray release, the audio and visuals are top notch and manages to highlight all the attention to detail that the animators have put in — whether it’s the ornaments on the Christmas tree or the multitude of toys that are laying around Mason’s play room. It certainly doesn’t look any different than the Toy Story feature movies.

Along with an audio commentary track from the filmmakers, the Blu-ray has several other special features with the highlight being the “fake” intro to an imaginary Battlesaurs cartoon that will instantly recall 80s shows like He-Man, Transformers and G.I. Joe.

There’s also a behind-the-scenes feature where the cast and crew talk at length about the project and also includes some amusing footage of Schaal (Trixie) and Kevin McKidd (Reptillus) recording their dialogue together. Toy Story That Time Forgot is now available on Amazon and other major retail stores.