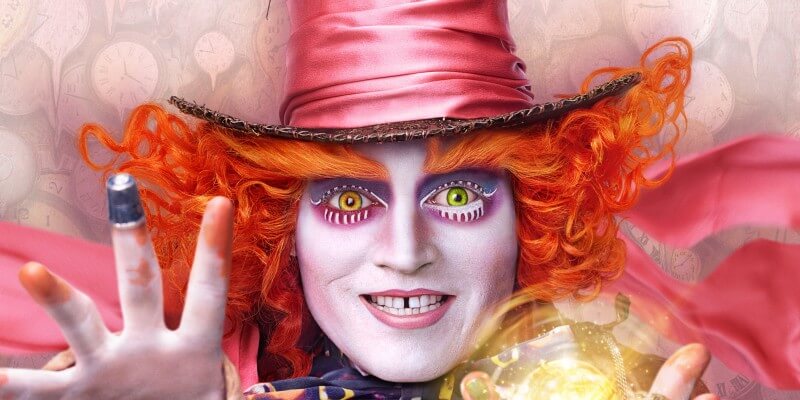 We’re continuing more and more images and footage of the upcoming sequel “Alice Through the Looking Glass” directed by James Bobin and executive produced by Tim Burton.

Earlier this week, Walt Disney Studios Motion Pictures released a teaser trailer and they followed that up on Friday with a series of photos of the main characters. Mia Wasikowska once again appears as Alice Kingsleigh, a head-strong young woman raised in Victorian London who is a dreamer and a noncomfortist. Alice first travelled to Underland as a child, and now, as she approaches adulthood, struggles with balancing the sense of curiosity passed down from her father and conforming to other people’s expectations. Sacha Baron Cohen joins the cast as Time, a magical being who sits on a black throne in a castle of eternity. He has one human hand and one mechanical hand and possesses the Chronosphere, a glowing, spinning, metallic sphere inside the chamber of the Grand Clock that powers all time. If removed from the clock, the Chronosphere will allow the person who has taken it to travel the Ocean of Time to the past. Anne Hathaway returns as Mirana, the mild mannered and kind White Queen. She is the beautiful younger sister to the spiteful Red Queen. Iracebeth, the Red Queen and former monarch of Underland who ruled with tyranny, malice and an extremely short temper, is played once again by Helena Bonham Carter. Iracebeth despises her younger sibling, Mirana. Johnny Depp is back as Hatter Tarrant Hightopp, better known as the Mad Hatter. When Alice returns to Underland, she finds the Hatter more mad than usual.