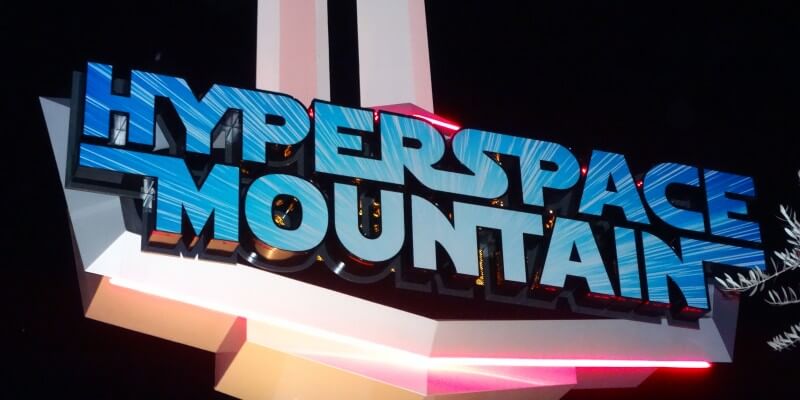 Season of the Force is a mere ten days from its debut at Disneyland, and Tomorrowland has been showing signs of the coming “Star Wars”-themed takeover of that area of the park.

Even more signs have gone up in the park over the past few days, including the “Path of the Jedi” sign at the Tomorrowland Theater  and a large “Season of the Force” sign at the Fantasyland-side entrance to Tomorrowland: Plus here’s a new daytime view of the Hyperspace Mountain and Super Hero HQ signs: The first new sign you might notice upon entering Tomorrowland is the suprisingly permanent-looking neon sign for “Hyperspace Mountain”, which, as announced will be a seasonal special-effects overlay for Space Mountain. It’s interesting to note that the X-Wing and TIE Fighter on the Season of the Force banner are from the original “Star Wars” trilogy, as opposed to the newer versions from this year’s new entry “The Force Awakens”. Another new sign is right around the corner at the entryway to the building that once housed Innonventions, and before that America Sings and the Carousel of Progress. This will be the new home of Star Wars Launch Bay, most likely until the permanent Star Wars expansion opens on the other side of the park. Star Wars Launch Bay will include meet-and-greets with many of your favorite “Star Wars” characters, exhibits of models from past and future films in the series, and a preview of the upcoming Star Wars expansion itself, which begins construction in the new year. The final sign you might notice is for “Super Hero HQ”, which will occupy the upper tier of the same building as Launch Bay. This will be the refurbished home of the Marvel super hero characters, with the new addition of Spider-Man. Oddly, as it stands now, the Super Hero HQ sign does not appear to feature the Marvel logo.