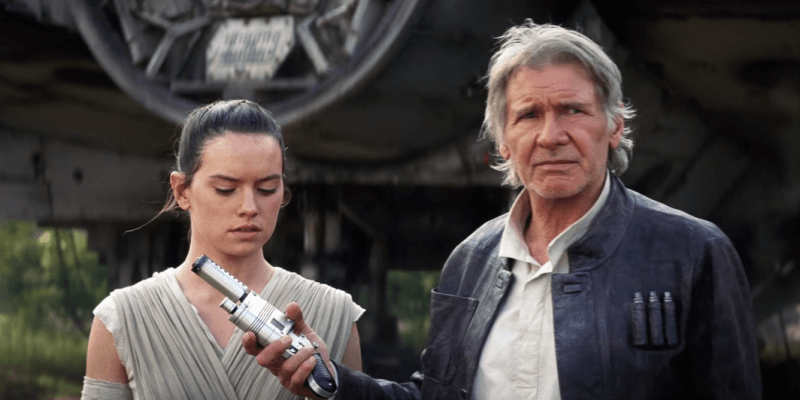 Blending in footage from the recently released full trailer along with the first 30-second TV spot, fans can hear previously unheard music from composer John Williams and new dialogue from Adam Driver’s Kylo Ren, who is seen on his ship just before “A New Threat” is displayed on the screen.

“Nothing will stand in our way. I will show them the Dark Side.”

A new shot of Finn on the run in Jakku may be the moment in which he first spots Rey. He almost looks like he recognizes her but they only learn each other’s name onboard the Millennium Falcon.

Whatever conversation they did have was brief because incoming TIE Fighters almost blow apart BB-8, Rey and Finn just as they pop out of a tent. That round design comes in handy on the sand for rough landings.

One of the first glimpses of the movie was a shot of Finn taking off his Stormtrooper helmet in distress. We’ve also seen a lone TIE Fighter wreaking havoc inside a hangar and firing shots as it leaves but here we get to see this TIE Fighter make its escape. This ties in neatly to the longer trailer that shows it getting hit or damaged and hurtling towards Jakku.

Elsewhere we’re treated to a great Han Solo moment where he hands a blaster to Rey outside of the Falcon and says, “You might need this.”

We also see General Leia at a Resistance command center with Han, C-3PO and his mysterious red arm, as well as a Mon Calamari (is it Admiral Akbar?).

Here’s Finn trying out a familiar looking blue lightsaber on an attacking Stormtrooper.

And for old time’s sake, Han Solo in action with his trusty pals Chewbacca and his blaster.