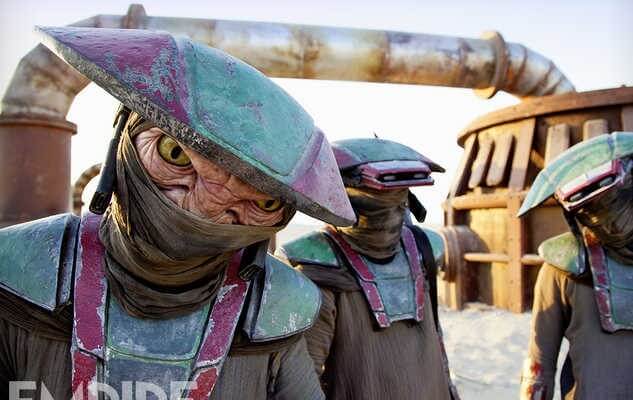 With just over a month until the most anticipated movie of the year, news has continued to leak regarding Star Wars: Episode VII – The Force Awakens. With that in mind, it’s time to take a look at some of the new characters details emerging from various sources.

First, the big news came regarding Andy Serkis’ character, Supreme Leader Snoke. It appears that in the set-up for the new version of the Galactic Empire, the new “First Order” will be led by Serkis’ motion capture character. In an interview with Entertainment Weekly, Serkis spoke about his character.

“Supreme Leader Snoke is quite an enigmatic character, and strangely vulnerable at the same time as being quite powerful. Obviously he has a huge agenda. He has suffered a lot of damage. As I said, there is a strange vulnerability to him, which belies his true agenda, I suppose.”

While Serkis does not reveal too much information about his performance, he also commented that based on the physical appearance of the character, he could only be created through motion capture. One character that this immediately draws to mind is General Grievous. Grievous remains a fairly controversial character among fans. The Cartoon Network/Netflix “Clone Wars” did a strong job of showing him as a true threat, he was undoubtedly physically dominant. While some may not recognize Serkis, he is best known as the actor responsible for bringing Gollum (Lord of the Rings), Cesar (Planet of the Apes), and King Kong to life. With such a talented motion capture actor on board, it is unlikely that Snoke will simply be a one-off character. Instead, he will likely become a major threat for the Resistance. Another character that has not received a lot of attention at this point is Oscar winning actress Lupita Nyong’o’s Maz Kanata. Until this week, the actress and Abrams have remained relatively quiet on the subject. However, Entertainment Weekly reported that Maz is an integral part of the story. In fact, Maz is hiding in the corner of the Force Awakens poster.

In the interview, Abrams reveals that she is a character that has lived for over 1000 years and was once a pirate. While he did not reveal any previous relationships that Maz has with characters, her background makes it likely that she has ties to Han Solo and Chewbacca. If Maz is as short as the poster seems to indicate, she will likely draw comparisons to Yoda as well. Considering that Abrams has revealed that we will learn more about the character as new media is released, it might be fair to say that she could have a strong impact on the future of the Star Wars universe. Also commenting on his role was up-and-comer Domnhall Gleeson. Gleeson (Harry Potter, Ex Machina) has been speculated to be a mole for the Resistance inside the First Order. Yet, when speaking with EW, Gleeson gave some intel on his character. “There’s an air of superiority, and being better than those people around you. He’s pretty ruthless. A strong disciplinarian would be a mild way of putting it. You don’t get that high up in your life that quickly unless you’re pretty ruthless.”

Considering the newly revealed information in the above EW article, his position in charge of the “Starkiller” space station will also draw parallels to Grand Moff Tarkin. However, Tarkin was really only present in Star Wars: A New Hope (briefly appeared in Revenge of the Sith), making his time in the Star Wars Universe shortly lived. Gleeson has been bookmarked by many as an actor that could potentially become a household name. His work in Ex Machina was superb, and showed a great ability to act alongside fellow Star Wars actor Oscar Isaac. It feels as though his role would be larger than Tarkin, but at the same time, it could be an easy character to replace. It’ll be interesting to see how big of an impact he will have in the final cut of the film. The last character that was teased by Abrams this week was Constable Zuvio. The first image of Zuvio was released through Empire magazine. Based on the background and buildings, Zuvio appears to live on Jakku. At this point, no news has been released on who will voice the character, let alone what his role will be in the film.

There is a chance that the actor that takes the role is Simon Pegg. Pegg, best known for his roles in Shaun of the Dead and Star Trek, has been confirmed to be in the film. He also has voice work credits in the Star Wars universe, the Ice Age series, and even Disney’s Phineas and Ferb. At the same time, depending on the size of the role, the character might not take a huge star for the role. It’ll be interesting to see if an actor is announced before the movie releases.

With new TV spots dropping almost every day, and even fun commercials that can touch on heartstrings, it is clear that excitement is continuing to build around the film. With only a month until the film releases, stay tuned to Inside the Magic to see news as it releases.