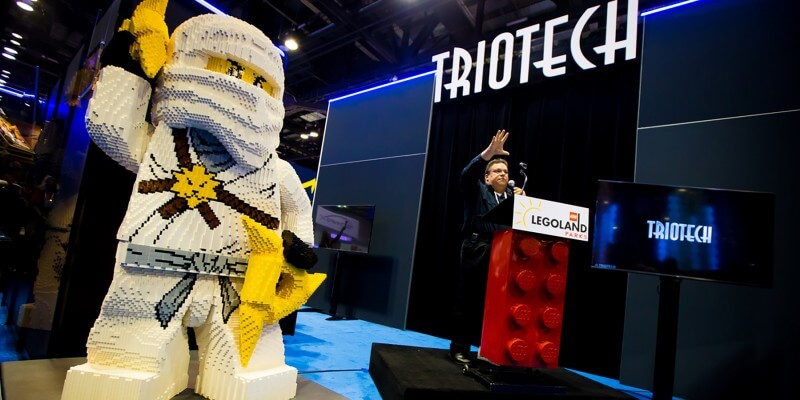 At the IAAPA (International Association of Amusement Parks and Attractions) Expo in Orlando yesterday, Merlin Entertainments announced a partnership with theme-park tech company Triotech to bring an exciting new technology to its upcoming Ninjago the Ride, opening next year at LEGOLAND California, followed by the Legoland parks in Billund and Malaysia.

The new Maestro technology from Triotech allows guests to interact with the ride and even change its outcome simply via the use of their hands. They will be able to “throw lightning bolts, move shockwaves, send ice soaring and emit fire balls” using the Maestro hand gesture tech that does not require the use of a hand-held device.

It’s a surprisingly responsive and accurate technology that is entirely intuitive to use and a lot of fun to play with. Like an cooperative/competitive game, the ride will allow up to four players per car to use one or both hands to create their own unique experience. Riders will collect points, and their scores will be displayed at the end of their quest. Ninjago the Ride will also incorporate 4D effects like heat, smoke and wind in order to fully immerse families in the LEGO world of Ninjago.