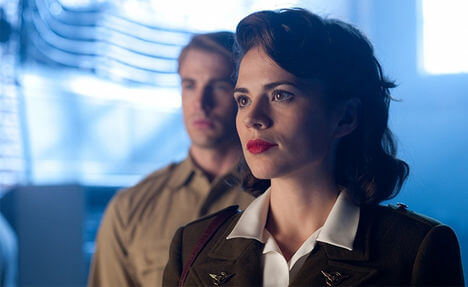 With Marvel’s “Jessica Jones” to be released on Friday, a lot of attention that was once focused on the ABC Marvel shows has shifted instead to the Netflix MCU characters. However, ABC is using the focus on the MCU to release a trailer for the sophomore season of Marvel’s “Agent Carter.”

While the show got off to a rocky start, the show received a second season. While some questions still exist after the Season 1 finale, Agent Carter will be traveling across the country to begin investigating new problems in Los Angeles.

The 30 second teaser is posted below.

For those unaware, Agent Peggy Carter first debuted in the MCU as a love interest for Captain America in Captain America: The First Avenger. After appearing in a Marvel One-Shot, Carter has become a staple of the MCU with appearances in Captain America: Winter Soldier, as well as Ant-Man. Actress Hayley Atwell has received praise for her role in the show and in the MCU, leading to the choice that she could carry a show as well.

The teaser feels extremely light, and operates as the polar opposite of the Netflix MCU. Considering some of the dark tones of Season 1, the shift in tone could help level it out immensely. It’ll be interesting to see what happens with the fallout of Season 1, as well as the change of location. The core cast returns, and looks like it could pick up momentum as it continues to build the story that will lead to S.H.I.E.L.D.‘s origins.