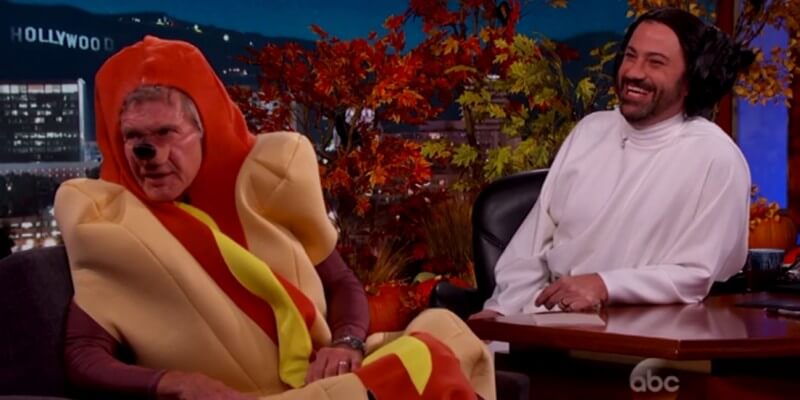 Last night’s Halloween episode of Jimmy Kimmel Live included a wealth of “Star Wars” content, with the entire crew, band, and Kimmel himself dressing up in costumes derived from the incredibly-popular movie series:

Kimmel also had another big “Star Wars”-related announcement for the show: the entire November 23rd installment will be devoted to “The Force Awakens,” almost a full month before it hits theaters on December 18th. Director J.J. Abrams will join new stars Daisy Ridley (Rey), John Boyega (Finn), and Adam Driver (Kylo Ren) as they talk about their involvement in the film with the always-welcoming host.

Following that, none other than Han Solo himself: Harrison Ford took the stage as the night’s featured guest, dressed as a hot dog (why not?), and of course Jimmy took the initiative to pry into Mr. Ford’s knowledge of the upcoming film’s plot:

Ford also discussed his recent injuries, including the highly-publicized one on the “Star Wars” set in London that delayed production by several months:

You can watch the full episode, which includes the Star Wars episode announcement at 21:55, at ABC’s Jimmy Kimmel Live website.