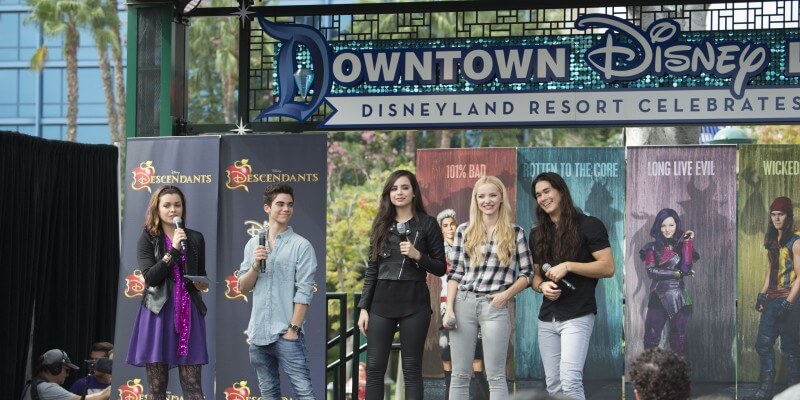 “Descendants” fans of all ages gathered at the Downtown Disney Stage Saturday morning for the opportunity to see the cast, director and choreographers of the Disney Channel original movie.

The event opened with a brief introduction by Radio Disney DJ Candace and a trivia contest to get the crowd warmed up:

Then “Descendants” director Kenny Ortega was brought onstage to discuss his role in bringing the TV movie to life, and what it was like working with the talented cast:

After that, the long-awaited moment arrived, and the audience erupted in applause as the cast of “Descendants” took the stage: Booboo Stewart (Jay), Cameron Boyce (Carlos), Sofia Carson (Evie), and Dove Cameron (Mal). They had a ten-minute discussion about what it was like working on the movie, and took questions submitted by fans:

Speaking of the fans, several young ones were brought on stage to help sing along to some of the songs with the cast. The songs performed included “Rotten to the Core,” “If Only,” and “Did I Mention”:

Up next was a discussion of the movie’s choreography, followed by a step-by-step lesson on how to do the moves in the “Set It Off” number from the film:

Then the cast and the crowd got to try out the moves they learned to the actual song itself:

And the event wrapped up with a very big announcement: the development of a script for “Descendants 2”:

Everyone in attendance had a blast, and it’s safe to say that the many young “Descendants” fans are now anxiously awaiting the sequel.