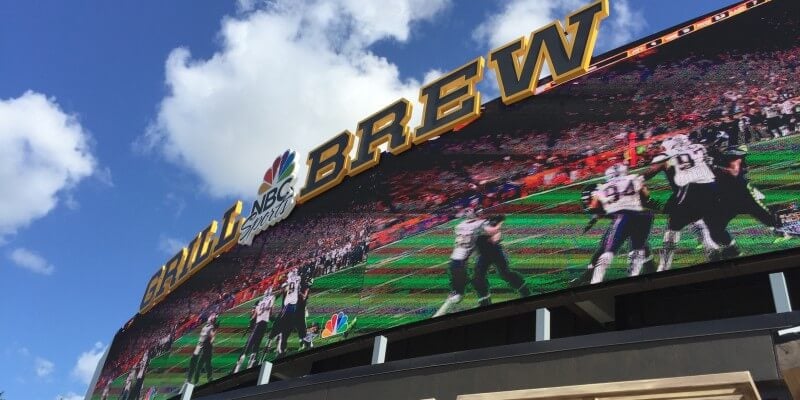 The kickoff to the first ever NBC Sports Grill & Brew took place a few days ago. This new restaurant is the latest addition to ever growing and expanded offerings of Universal Orlando’s CityWalk district.

Taking up residency in the former NASCAR Café, this establishment raises the expectations for what the ultimate sports bar could (and should) be. Boasting nearly 100 HD TV’s, well over 100 unique beer selections including their exclusive signature 862 Orlando, a full premium top shelf collection of liquor and 75+ menu items making sure that every appetite finds its own fan favorite. We were invited to attend the festivities at CityWalk that included a red carpet arrival complete with a sports commentator reeling off an assortment of facts relating to the history of NBC Sports and the offerings the Grill & Brew had in store. Once inside, we were also able to chat for a bit with Modesto Alcala, the vice president of revenue operations for CityWalk. With a vast menu holding over 75+ items, there were several displays and tasting locations showcasing off what they would consider to be their top rated dishes. While we weren’t granted access to the 2nd floor, everything about the first floor highlighted the essentials of an ingenious sports bar. You’ll even have the ability to enjoy drinks and a bite to eat over glass topped froosball tables while watching foods be prepared in the open-fire grills in the center of the restaurant. Bob Costas delivered the opening dedication alongside Cris Collinsworth, Hines Ward and Michele Tafoya. The day also marked the 76th anniversary of the first sports broadcast from NBC, and had a large audience inside the venue of various professional athletes and NBC Sports commentators. See the full video here.

If its not the variety of deliciously prepared fresh foods that’ll captivate your attention, its certainly the 120+ foot wide HD stadium screen that will command your interest. Universal is trying to make a statement with this establishment, and they so very much succeeded at that.

The restaurant is now open daily to the public, from late afternoons until 2am daily.

You can see more of the NBC Sports Grill & Brew in our photo gallery.