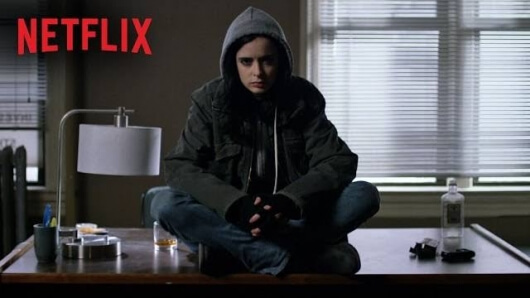 Marvel has been on a roll of late, with new content or information regarding their properties seemingly dominating the headlines every day. While some are afraid it will induce “superhero fatigue,” Netflix has had no problem picking up its second series from Marvel.

Marvel’s Daredevil was an extremely popular show, marrying violence, grittiness, and street level crime to create an immensely popular show. Not only was it Netflix’s top rated show for a time, but with season 2 adding the Punisher, it will likely get even more popular.

However, those of us who thought that we’d have wait for season 2 of Daredevil to get a taste of the street level Marvel were clearly mistaken. Last week, Marvel’s Jessica Jones released a trailer that quickly made its presence known. Not only should we be excited for the show, but there’s a real chance that it surpasses the hype. Here is Marvel’s official synopsis for Jessica Jones from May:

“Ever since her short-lived stint as a Super Hero ended in tragedy, Jessica Jones has been rebuilding her personal life and career as a hot-tempered, sardonic, badass private detective in Hell’s Kitchen, New York City. Plagued by self-loathing, and a wicked case of PTSD, Jessica battles demons from within and without, using her extraordinary abilities as an unlikely champion for those in need… especially if they’re willing to cut her a check.”

With the new trailer released, it’s time to break down some of the footage we’ve seen. It should be noted that the following images and descriptions may contain some spoilers. Also, full apologies for the darkness of some of the stills. After all, the Netflix shows are taking a darker tone than the traditional MCU.

First, the trailer gets right into the action, showcasing Jones (Breaking Bad’s Krysten Ritter) throwing a man through glass and stopping a mugging. It also instantly introduces fellow hero/love interest Luke Cage (The Good Wife’s Mike Colter). Cage and Jones have a long history in the comics, and Cage is also due to receive his own Netflix series in 2016. While Cage isn’t shown displaying his powers in the trailer, we do get a view of Jones’, namely super strength and her ability to fly. Shortly after the quick introduction, the trailer shifts to a far darker tone, relaying Jones’ issues with addiction and PTSD. There is clearly a dark past we’ll see in the series, as we literally see blood on her hands. All of this leads to the introduction of Kilgrave, a.k.a. the Purple Man (Doctor Who’s David Tennant). The poster below was released by Netflix. Instantaneously, the show trailer begins to establish Kilgrave as a dangerous foe. Jones’ fear of him juxtaposes well with the display of her power just 30 seconds earlier. This strategy positions Kilgrave as a legitimate threat in the MCU. The avoidance from characters to even say Kilgrave’s name also feels very familiar to the way that Fisk/the Kingpin was handled in Daredevil, a method that made him imposing without needing much screen time in the first few episodes. The Purple Man’s power base is also very interesting. It looks like he will be borderline telepathic, which makes slightly more sense than his counterpart in the comics. In comic lore, he can control the thoughts and actions of his victims via chemicals and pheromones. The effort to define what he will be able to do will be interesting because ambiguity might be the best way to make him a threat to Jones and her allies.

From this introduction on, there are some incredibly cool shots from the show. The police station “Mexican standoff” may be the most intense from the trailer, and will likely occur at a pivotal scene in the series. The group hangings and other violent imagery suggest that Jones is over her head in this circumstance, and the music used in the trailer perfectly conveys the intensity. Last but not least, we get a couple of frames of Carrie-Anne Moss in the trailer. It was just a couple of weeks ago that we got confirmation of her character, Jeri Hogarth. As ComicBook.com explained, Marvel gender-swapped Hogarth after they got Moss. Hogarth is an attorney that is friendly to superheroes in the comics, with close ties to Iron Fist and Luke Cage. Not only is it great to see Moss working in an action-packed world again, but it helps add to the great side characters of the TV MCU. With Moss, Rosario Dawson, and Elden Henson, Marvel TV has found interesting non-powered characters to help the show stay grounded.

One character that is looming over the series, is the incredibly successful Daredevil. The show boomed onto Netflix in April and was instantly praised by fans and critics alike. That makes it all the more interesting that rumors are circulating about whether or not Daredevil will appear in Jessica Jones. Jon Schnepp of Collider Heroes seems to believe that Daredevil will be showing up, but we’ve yet to receive any official word from Marvel. Schnepp didn’t provide any other details, so we can take this rumor with a grain of salt for now. Still, with the confirmed Defenders series on the way, having Charlie Cox show up in a similar fashion to Robert Downey Jr.’s cameo in The Incredible Hulk would be a great way to build hype moving forward.

The trailer displays the problems that Jessica Jones will be facing front and center, with PTSD, and substance abuse potentially the least of her problems. It may also have the ability to convey important messages about mental illness, even if that illness affects someone who can stop a moving car. The show looks to confront these issues head-on, while still proving loyal to the MCU and comic book lore. Considering that a relationship with Cage seems likely, Kilgrave looks like a real threat, and that Jones’ must battle her own demons, Marvel’s Jessica Jones looks to be another exciting chapter in the MCU.