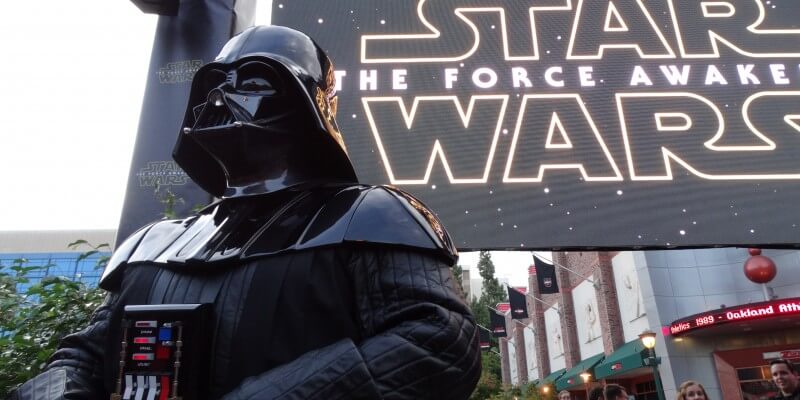 Whether they were local fans who heard about the event via social media, or tourists visiting Disneyland who happened to wander by, hundreds of Star Wars devotees gathered in front of the AMC Downtown Disney 12 on Monday evening to be among the first to see the third and final trailer for “Star Wars: The Force Awakens.” The stage was set up much earlier in the day, and a sign informed guests to return to the area at 6:30 PM to prepare for the trailer premiere, which was scheduled for half-time during the Monday night football game on ESPN. But this being Star Wars, and Star Wars being incredibly popular, people started to show up early, and around 4:00 PM a DJ came out to entertain the crowd: And of course, among the fans who began to trickle in, several of them were dressed in their best Star Wars cosplay, including more than one example of both new characters Rey and Kylo Ren, and an enduring favorite from the original trilogy, Darth Vader. Once the show got started, the crowd was treated to the existing two teaser trailers, and a couple featurettes that had only previously been shown at Star Wars Celebration and San Diego Comic-Con. Eventually after what seemed like a very long wait for the football game to reach half-time, the time finally came and the crowd was shown the new trailer simultaneous to the national broadcast. Cheers erupted for each major character that appeared on-screen, sometimes drowning out the dialogue, which made it fortunate that the trailer was immediately shown a second time after it ended.

Immediately after that tickets for the December 18th release of “The Force Awakens” went on sale at the AMC and on ticketing websites nationwide. Did you get yours?