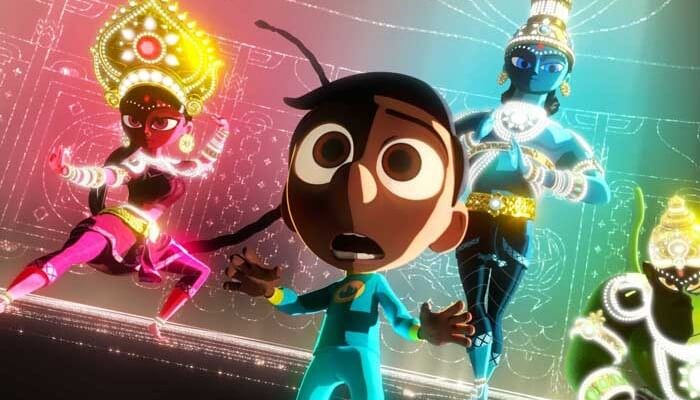 As is the case with the release of any new Pixar film, “The Good Dinosaur” will have a short film called “Sanjay’s Super Team” playing before it when it is released in theaters on November 25.

Pixar shared new details of the short film to Yahoo Movies along with a clip to whet our appetite:

The seven-minute short is based on director Sanjay Patel’s own childhood, thus the name of its lead character — specifically the culture collide he experienced with his devout father growing up in San Bernadino, California.

“Every morning my dad worshipped his gods and his shrine and I worshipped mine in mine — which was the TV,” Patel told Yahoo Movies during a recent phone interview. And that’s exactly how the short starts out, with little Sanjay watching his favorite cartoon, the fictional Superteam (loosely based on Patel’s own boyhood love of Super Friends).

Most of the short unfolds in Sanjay’s active imagination. While the boy would prefer to watch his cartoons than worship with his dad in real life, in his mind, his father’s deities come to life in a heroic adventure. Instead of embedding typical Pixar references — like hidden Mickey Mouses and other familiar characters — Sanjay’s Super Team is chalked full of Hindu symbols. “There’s lots of Easter eggs if you’re familiar with the culture,” said Patel. “And if you are, man, there’s tons of stuff.”

For more, check out the full article from Yahoo Movies.