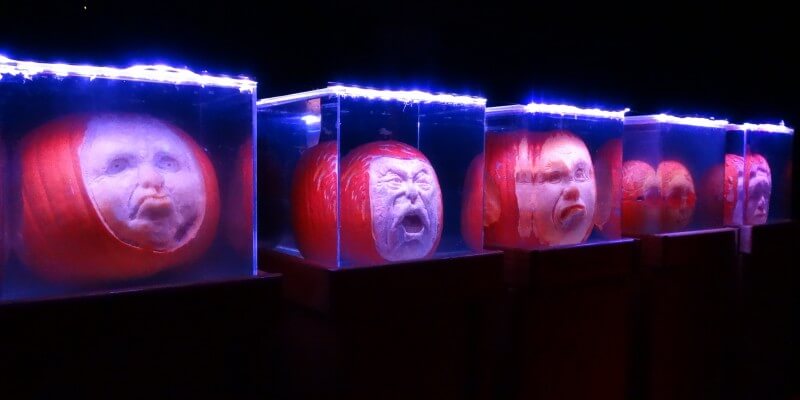 The unique seasonal outdoor walk-through event Rise of the Jack O’Lanterns returned to the Descanso Gardens in Los Angeles this Halloween season for another October’s worth of very cool-looking carved pumpkin displays. Over five thousand pumpkins (both real and fake, according to the FAQ on their website) are used to create the many varied scenes that make up the walking tour, which takes between 45 and 75 minutes to complete, depending on how fast you walk and how long you wish to take in all the details, which are indeed very impressive. An official “Rise” Jack O’Lantern carver is also on-hand as you begin the self-guided tour to explain how much work goes into each and every pumpkin, and to demonstrate step-by-step how you can create your own intricately-designed Jack O’Lanterns at home. Of course some of the more popular exhibits along the walk are directly related to popular culture. Kids and adults alike get a kick out of spotting their favorite characters and franchises either carved into individual pumpkins or assembled in a collage of many pumpkins stacked on top of each other. One of the more breathtaking displays, returning from last year, is a collection of fearsome dinosaur skeletons, each built from dozens of pumpkins in striking poses that instantly catch the eye. Other memorable displays this year include a tribute to Dia de Los Muertos, plenty of different species of animals (from land, sea, and air), a bunch of creepy heads in jars under haunting fluorescent lights, and a giant Chinese dragon. Rise of the Jack O’Lanterns is a great opportunity for families and Halloween fans of all ages to take a walk out in the brisk nighttime air and get a look at some incredible holiday creations. In addition to the Descanso Gardens location, the show is also available this year at the San Diego Zoo Safari Park, Old Westbury Gardens in New York, and at Santa Anita Park in Los Angeles as well.