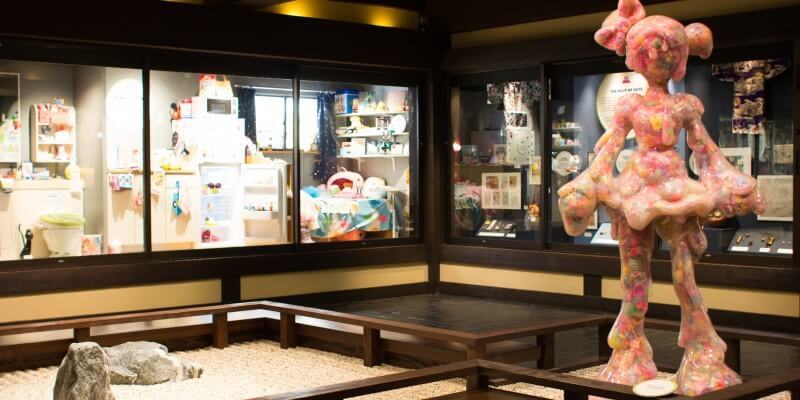 The Bijutsu-kan Gallery in the Japan Pavilion in Epcot now features the work of famous Japanese artist, Sebastian Masuda. The exhibit is called “Kawaii: Japan’s Cute Culture” and the piece featured has been named Melty-Go-Round (Harajuku Girl). The transparent sculpture contains toys, jewelry, and other objects that Masuda collected from his travels to other Asian countries and the United States. By collecting inspiration from all over, Masuda reflects the cultural influences from the western countries and Tokyo that have shaped the Harajuku culture.

Take a quick tour of the exhibit here:

Masuda, born in 1970 in Chiba, Japan, opened the concept shop 6%DOKIDOKI in Tokyo’s Harajuki district in 1995. Masuda was already well known as a popular set designer in the film and theater industry.

Masuda’s quote about kawaii can be found in the exhibit, “The meaning of kawaii is that personal cosmos filled with the collection of things one madly loves. ‘Kawaii’ is not something fashionable – dressing up for others or trying to be someone else – but rather collecting things because you simply love them. Fashion is just a statement to show what you love.” The exhibit also displays how this “cute” culture has influenced every day life in Japanese culture. From home decor to clothing, self expression through bright and cute pieces can be found in the exhibit in a replica of a Tokyo apartment. Some familiar faces of kawaii are also featured in the exhibit including Domo-Kun, Pikachu, and Kitty White (most popularly known as Hello Kitty). What are some things you love that you would want to express your kawaii?