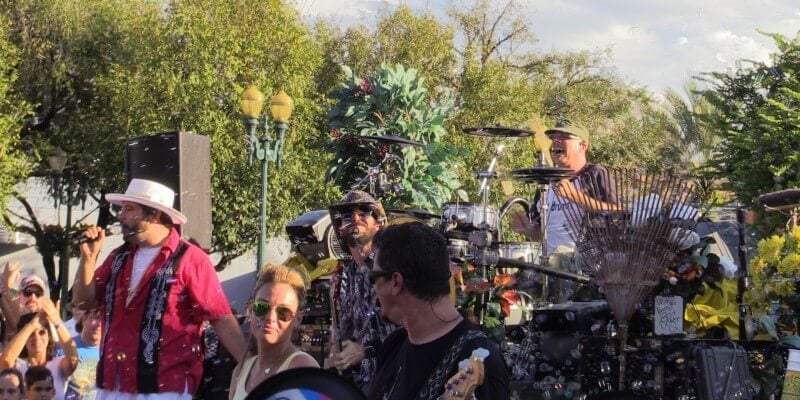 This past weekend saw another change to Walt Disney World’s Hollywood Studios. After an 11-year residency, the landscaping rock band Mulch, Sweat & Shears sang their farewell song to a packed house, so to speak. Long time fans crowded the center stage in front of the Chinese Theater, some arriving hours before their final 4:30pm performance. By show time, the crowd was a solid 20+ people deep surrounding their famous yellow and green pickup truck; and it only grew larger once the performances started.

The charm, wit and classic “rake-and-roll” covers performed by the group has consistently brought out those extra beats of energy in the Floridian sun-soaked tourists. And with their departure, you’ll soon find a noticeable absent energy specifically at the Streets of America. In their sendoff the group performed for nearly a full hour, allowing all who’ve enjoyed them over the years to get their fill of the lovable landscapers. The usual humor was there, with a few comical jokes throwing lighthearted shade at their departure.

Morris Mulch was there with his sister Mia who joined him front and center several times; poking fun at each other and at the situation their band is in. Together, they closed out with an audience favorite “We Are The Champions” while bubbles share the air with a massive arm-swaying crowd. They mowed down the hearts of all in attendance, gave us a few laughs, and proved they never overgrew their welcome at Hollywood Studios. Like true rock stars, they walked off into the sunset with their heads held high; the absolute best “bandscapers” you could have asked for.