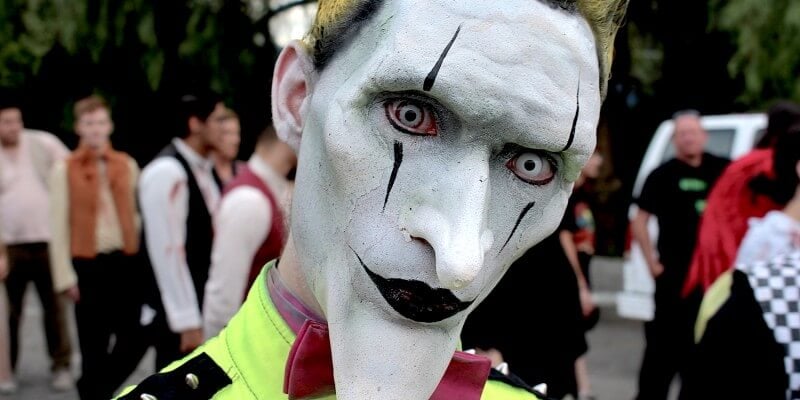 Six Flags Magic Mountain in Valencia, California has once again made the night come alive with monsters in their annual Fright Fest festivities. This year the park brings us seven scare zones, seven mazes, three live shows and even a few of their rollercoasters re-themed for the season.

Whenever attending a haunt inside of an existing park I like to take notice of what sets them apart from the other parks also in the haunt business. For Fright Fest at Six Flags Magic Mountain it is the way they open the park and more especially the makeup.

Scott Ramp is the head makeup designer/artist working the event and after visiting many haunts I can easily say that Scott and his team do some of the best work I’ve seen. From zombies to demons and clowns ,every characters’ makeup is done with such detail and consideration that you almost feel bad most of the event is so dark that you’re missing out on such beautiful work. In the clowns, especially, it is tough to tell where the prosthetics begin and the actors’ face ends. There are a lot of one-of-a-kind prosthetics used for the event but not once did I see any pieces falling loose even after a long night of sweaty performances. I highly suggest arriving at the beginning of the night in order to see the makeup before the sun sets completely.

Unlike most other parks that have haunt events, Six Flags Magic Mountain does not clear all guests from the park before opening for their haunt. Guests who are visiting for the day are invited to stay for the after hour festivities. With that single day admission you can still witness the monsters taking over the park in the opening cavalcade and in the scare zones as well as admission to the live shows and rides. The only experiences that require an additional purchase are the haunt mazes, where you will need a one-time wrist band purchase allowing you to visit the mazes repeatedly throughout the night.

The Willoughby’s Garden of Darkness – This dense labyrinth of man eating plants and evil apparitions is no playground for the faint of heart. Red’s Revenge – Enter the world of Red Riding Hood where you and the Big Bad Wolf are hunted by Red and her demonic minions. Vault 666 – In the distance is an old abandoned facility that has recently been discovered with years of secrets of the unknown. The Aftermath – Enter a post-apocalyptic city where nomad warriors rule with bone-crushing iron fists and the dead stalk the living. Chupacabra – Come face to face with this elusive blood-thirsty creature as it terrorizes a local Dia De Los Muertos festival. Toyz of Terror 3D – The now defunct toy factory is haunted by a chilling turn of events that took place when the admired inventor went psychotic adding demented spirits to his beloved toys. Willoughby’s Resurrected – The Willoughby’s Family mansion tale unfolds before your eyes at this once affluent Victorian mansion that has become a haven to evil spirits. My favorite mazes would include “Toyz of Terror 3D”, “Willoughby’s Resurrected” and “The Aftermath”. Toyz took full advantage of the 3D aspect making it quite disorienting with leaning rooms and quickly spinning hallways creating effective illusions. Resurrected had some of the best scenic design of the evening creating a convincing decayed mansion. Aftermath definitely took the cake as far as location was concerned using the old sets and backstage area of the Batman stunt show which was once a staple at Six Flags. They did a great job repurposing this space creating one of the largest mazes in Southern California.

Overall, Six Flags Magic Mountain is a nice addition to the Halloween Haunt Season and is fairly affordable, especially if you already planned on spending the daytime in the park or have a season pass. Be sure to wear very comfortable shoes. It isn’t called Magic Mountain without reason. There are some steep hills to climb. Just think of it as a good way to work off the fresh and delicious pumpkin fudge available in the park this time of year.