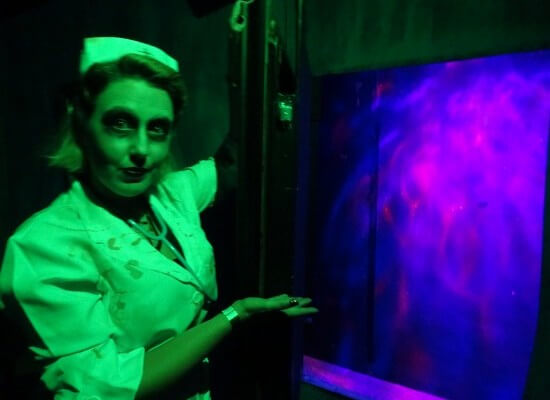 For the third year running, Southern California’s Evil Twin Studios, a partnership between co-creative directors and former home-haunters Todd Schroeder and Scott Peterson, has launched its own independent professional Halloween haunt in South Pasadena. And once again it has local horror fans buzzing about its inventive and unique use of story and space, and of course lots of scares. Now based out of a new location in the large parking lot of a school district office building (its home for the previous two years was in a thematically-appropriate but too-confining nearby mortuary), this year’s experience is themed around the run-down Raymond Hill Sanitarium, its very disturbed clientele, and its even more demented staff. “Ward 13” is a roughly-fifteen-minute walkthrough attraction (though, without spoiling too much, you will often find yourself doing much more than walking) that begins innocently enough: a security guard at the sanitarium offers to take you and your group, no more than six people at a time, on a tour of the grounds. As you might expect, things quickly take a turn for the worse and visitors soon find themselves in all manner of creepy predicaments, culminating in a bone-chilling visit to the mysterious Ward 13. We were asked not to reveal too many of the surprises and scares that lie in store for visitors to Ward 13, but rest assured there are more than a few unnerving moments, including one very unique, innovative sequence that we were sworn to absolute secrecy on. The only hint I’ll give is that things become truly disconcerting when control of speed and movement is taken away from you. The set design in Ward 13 is impressive, but the most captivating element of the attraction is the cast. All of the performers are wholly committed, no pun intended, which is an especially remarkable feat considering they are all volunteers. Tickets are affordable ($15 per person in advance), parking is ample and free, and it’s located in a cool neighborhood with lots of neat-looking houses. Plus your entrace fee is going to a good cause: after recouping costs, the show will give all its profits to Pasadena public schools. The only drawback for central Los Angeles or Orange County residents is that “Ward 13” might be a little too far out of the way for such a short experience, but it’s definitely a rewarding one. 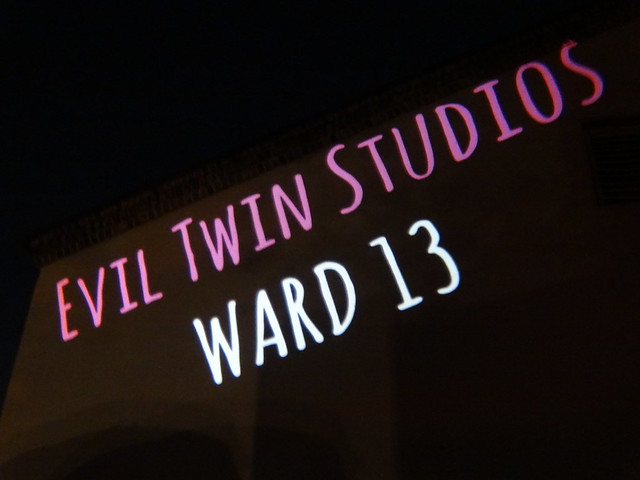