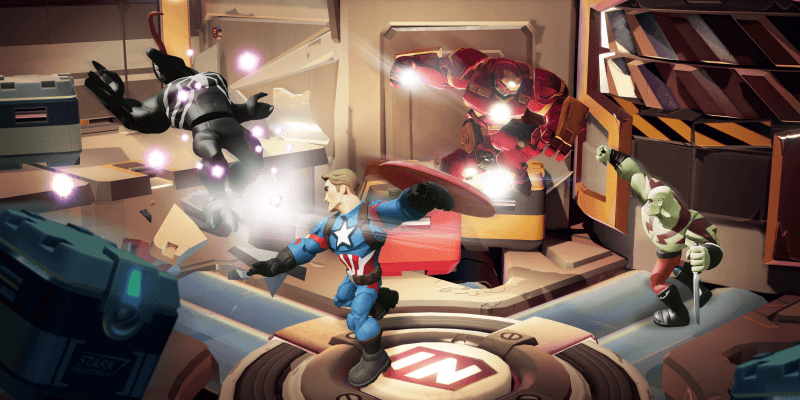 Set to be released on March 2016, this new set features a brand-new storyline starring Hulkbuster, Ultron and Captain America – The First Avenger, a new version with a different costume, pose and enhanced abilities. More new Marvel Battlegrounds figures will be announced in the coming months. Additionally, the set will be fully compatible with previously released Marvel Infinity figures that were released for Infinity 2.0 making this the biggest Infinity Play Set to date. The older figures will gain adapted abilities and skills within the Play Set to better adapt to the new gameplay.

The most notable feature is the ability to play with four characters — a first for any Infinity Play Set.

“With Disney Infinity 3.0, we’ve aimed to provide a wider variety of gameplay than ever before, and the Marvel Battlegrounds Play Set represents our commitment to developing something entirely new for our players,” said John Blackburn, SVP & GM of Disney Infinity. “The four-player arena style combat gameplay is a perfect way for friends and families to come together and play in head-to-head battles with some of their favorite Marvel characters.” “We worked closely with the Disney Infinity development team to come up with new gameplay and storyline for Marvel Battlegrounds that is unique to the platform,” said Jay Ong, VP of Games, Marvel Entertainment. “We’ve created an authentic Marvel story that will give players the freedom to choose any Marvel figure in Disney Infinity and have them face off against each other in an arena style combat.”

For more information on the new Play Set, fans are encouraged to check out the Disney Infinity 3.0 Edition: Facing Off in Marvel’s Battlegrounds panel at New York Comic-Con on Saturday, October 10 from 4:00 – 4:45 p.m. for an in-depth look. Attendees will get a special pre-release figure giveaway but anyone can watch the live stream at the New York Comic-Con website.