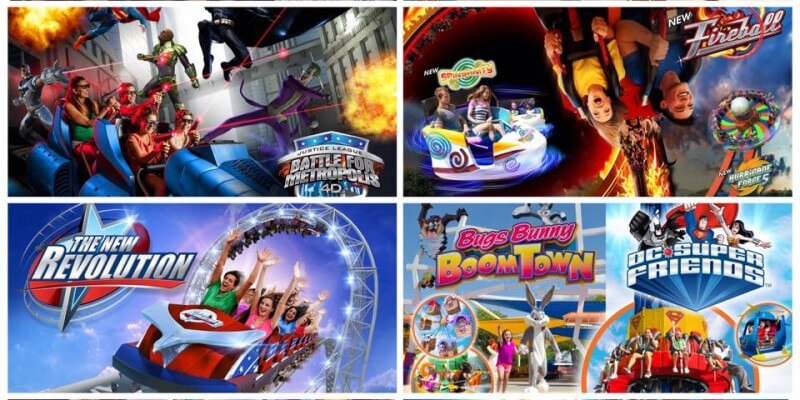 Six Flags being the largest regional theme park company in the world, today announced a impressive lineup of new rides and attractions coming to its parks in 2016. The lineup included everything from thrilling coasters to family friendly land expansions. Northern California will also see the arrival of its first-ever hybrid roller coaster themed after the DC villain the Joker.

Check out the press release below for the large, full line-up:
*Six Flags Discovery Kingdom will open the most-anticipated new roller coaster in Northern California in over 10 years, The Joker. The villainous character’s personality is evident in this extreme hybrid coaster’s chaotic twists and turns throughout its 3,200 feet of dual-colored track. With a first ever “step-up under-flip inverted roll” that takes riders horizontal, The Joker ride will also feature the ultimate “fake-out” with a unique breaking wave turn, the only one of its kind on the west coast. Riders will experience a wild Zero G barrel roll plus 15 extreme airtime moments at maximum speeds of 53 mph. *Six Flags Great Adventure will dominate as the “king of chaos” in 2016 when the world’s largest theme park debuts its 14th coaster and the most unique scream machine in its history — Total Mayhem. After being lifted straight up a 12-story, 90-degree hill, this 4-D, free-fly coaster will wreak havoc as riders flip head-over-heels at least six times along the weightless journey. The wing seats amp up the pandemonium since riders will experience all of this chaos with no track above or below — just the sky, ground and adjacent lake churning around them. *Both Six Flags Great America and Six Flags Mexico, in partnership with Warner Bros. Consumer Products and DC Entertainment, will bring the next generation of interactive thrills to their parks with the debut of JUSTICE LEAGUE: Battle for Metropolis. Guests become members of the JUSTICE LEAGUE Reserve Team and engage in a full-sensory journey as they battle alongside BATMAN™, SUPERMAN™, WONDER WOMAN and GREEN LANTERN against Lex Luthor, The Joker and his henchmen. Traveling in six-passenger vehicles, riders must outsmart the villains to save the city of Metropolis. *Six Flags Magic Mountain, the Thrill Capital of the World, will commemorate its 45th operating season and the 40th anniversary of the world’s first 360-degree looping coaster, Revolution, which has delighted over 45 million guests during its 40-year reign at the park. The New Revolution will feature newly-created special ride effects, a new look, and newly designed trains that will deliver a smoother, sleeker ride experience for guests. *Six Flags Over Texas, the Thrill Capital of Texas, has plans for an impressive expansion to the GOTHAM CITY section of the park that will include three new rides in 2016. The area will become the ultimate battle of BATMAN™ versus villains with the opening of The Riddler Revenge — a new twist on thrills with guaranteed wicked high-flying fun; Catwoman Whip — a sinister spin and tilt ride that is much like its namesake; and Harley Quinn Spinsanity — a devious take on a classic spinning ride. *Thrilling family fun is in the works as Six Flags Over Georgia introduces the world’s first DC SUPER FRIENDS themed area and the all-new Bugs Bunny Boomtown. The two newly-themed children’s areas will feature 12 rides and attractions that families can experience together at the Thrill Capital of the South. *It is off to the races to see who is the fastest in the family, as Six Flags White Water adds the new 60-foot tall exhilarating Wahoo Racer water slide. The multi-lane mat racing slide complex is the largest slide of its kind in the world at the South’s Most Thrilling Water Park. Riders will experience the thrill of racing against their friends and family members reaching speeds of up to 40 feet per second on six aero-dynamic designed water toboggans. *The Great Escape is introducing the hair-raising Greezed Lightnin’ in 2016. The all-new super looping thrill ride will rocket guests 360 degrees, reach exhilarating speeds and leave them hanging, waiting for more. Thrill seekers will be hurled a series of seven full inversions, both frontward and backward, experiencing suspenseful hang time at over 70 feet in the air. *Six Flags America is adding Splashwater Falls — a giant interactive water playground that features dozens of slides, nets, sprays, geysers and thrills for the entire family to enjoy. To top off the fun, a super-sized tipping bucket atop the huge play structure will dump gallons of water on guests throughout the day. *La Ronde in Montreal is set to bring guests exciting new adventures as it flips the trains on the iconic Vampire coaster to run backward, and adds two rides in an all-new section of the park: Avenue Aventure: Phoenix — a flying scooter ride that puts guests in control as they soar against the wind; and Gravitor — a fun adventure that lifts guests high above the ground as they turn around and around in an ocean of lights and sounds for a real dance party in the sky! *Six Flags St. Louis — the Coaster Capital of Missouri, and Six Flags New England — the Coaster Capital of New England are heating things up next season with the new seven-story tall Fireball looping thrill ride. Fireball features a single loop allowing guests to soar back and forth, pendulum style, as they build up speed to propel them head over heels. Traveling back to back in unique “face-off” seating, guests will rocket through a series of 360° revolutions stopping upside down for some insane, inverted hang time before reversing directions. *Six Flags Fiesta Texas — the Thrill Capital of South Texas is bringing three new thrill rides to the park along with an all-new boardwalk area. In addition to the looping excitement of Fireball, two other mind-bending rides will round out the park’s exciting new Fiesta Bay Boardwalk. On Hurricane Force 5, riders take on the power of a storm and swirl round-and-round while soaring high into the air; and Spinsanity will offer the ultimate whirling adventure for thrill-seekers. *Six Flags New England is thrilled to relaunch its iconic steel coaster Bizarro as Superman™ the Ride featuring superhero music and theming throughout this epic coaster. Riders will feel like Superman™ as they climb over 20 stories into the air and race down like a speeding bullet at 77 miles per hour. Guests will also experience twists, turns and weightlessness along the coaster’s one mile of track. Thrill-seekers will not want to miss this heroic coaster as Superman™ regains his title at the Coaster Capital of New England.

Comments Off on Six Flags announces 2016 lineup of new rides and expansions, hybrid coaster “The Joker”