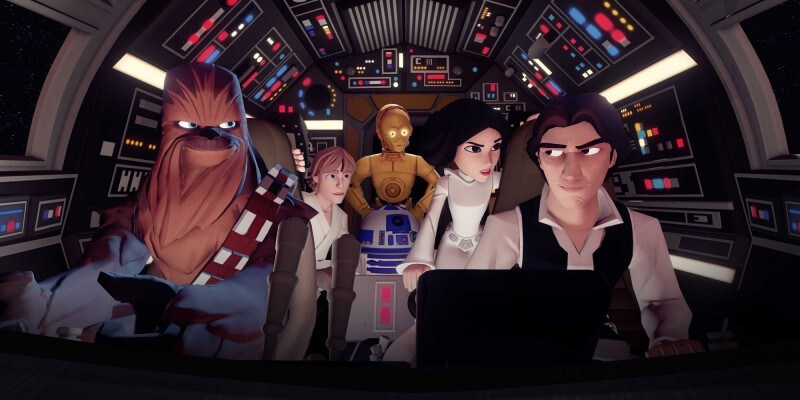 It’s clear that the team behind Disney Infinity closely listens to their fans.

The latest release, Disney Infinity 3.0, is the best incarnation yet, combining Disney classics with the company’s latest big name acquisitions, all perfectly presented among an exhaustive variety of gameplay.

“Infinity” is indeed the right word, as from the very beginning of launching the game players are immediately presented with an impressively large array of options to choose from. When the original Infinity launched a few years ago, many players felt it was fun but didn’t quite live up to its potential with far too many limitations. The 2.0 release countered that by adding a load of new features, but they were far too confusing to find and became quickly overwhelming.

But in this latest 3.0 version, it all comes together quite well, introducing its many features through character-driven tutorials that ultimately let the player decide just what they want to do – and how they want to do it.

The basics of Infinity are still there. There are play sets, based on popular movie franchises, the biggest addition of which is of course “Star Wars.” When 2.0 brought Marvel to the mix, the fun factor of Infinity definitely increased – but not nearly as much as with taking control of the Millennium Falcon or wielding a light saber while battling familiar intergalactic baddies. This is not only an improvement for Infinity, it’s also simply a fun “Star Wars” game on its own, with great voice acting and music supplementing the fun visuals. There is also Toy Box mode, which allows gamers to develop their own gameplay, only limited by their imaginations. A major enhancement to this free form mode is the addition of Toy Box Expansion Games, providing some structure for the many gamers who called for a bit more guidance and play options. There are racing games and a whole lot of battles to be found within. The toy figure assortment that has launched with Disney Infinity 3.0 is a great mix of classic Disney with those from more modern movies. Tron fans finally get theirs while “Star Wars” spans films to TV. Mickey and Minnie make the game along with newcomers from “Inside Out,” just to name a few.

It’s all quite a collection: “Frozen” fans are no doubt excited that Olaf has joined Infinity, though he’s a rather bumbling worthless character to play with. Meanwhile, anyone with a light saber is amazingly fun, as is the duo from “Tron: Legacy.”

With two expansions planned already, “Star Wars” is definitely the king of Disney Infinity 3.0 and adds the most fun seen in the game so far. It’s impossible to include every new feature in this review, as the list just goes on and on. There are enhanced online features, more toys including many from the theme parks, music and path creators, farming abilities (including churros!) and much, much more.

Though the last two versions of Disney Infinity indeed felt quite infinite, it’s not until 3.0 that the whole game feels cohesive, enabling the player to more easily do what they are meant to: let their minds run wild and just play without limits.

Disney Infinity 3.0 is now available on all major console systems.