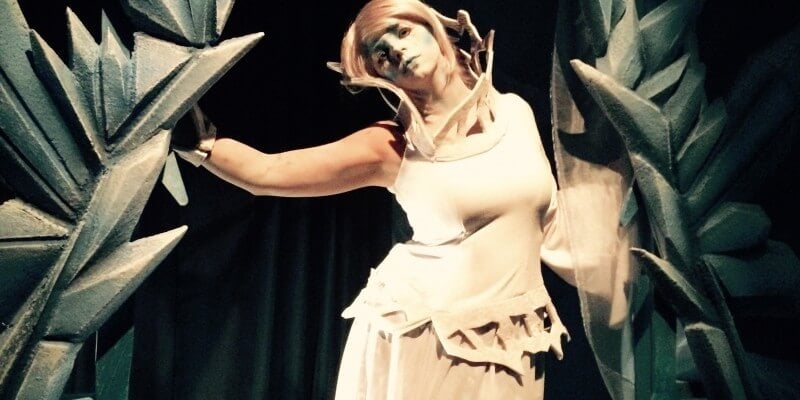 The Halloween season has officially begun in Southern California, as Knott’s Berry Farm in downtown Buena Park opened its gates as the rechristened Knott’s Scary Farm for the 43rd year running. The notorious Green Witch was on hand with her minions The Deadly Seven to host an “opening moment” to Scary Farm’s first night of 2015 on Thursday, as thousands of haunt fans gathered to be among the first to experience the many attractions. The Dead of Winter

Of the new mazes, the one that will certainly hold the most interest for theme park– and Disney– fans is The Dead of Winter. It’s a very cool-looking “white maze” (according to its creators, designing a maze around bright colors instead of dark ones is a whole different animal) inspired by the same source material that gave us “Frozen”: Hans Christian Andersen’s “The Snow Queen”. I don’t think there’s any doubt as to why Knott’s chose to revisit that material, as Scary Farm has been known to playfully rib their theme-park neighbors to the south, as we’ll see more of when we talk about The Hanging. The Dead of Winter is certainly worth a visit for both Frozen fans and detractors alike, as it offers a unique, and decidedly more grim, take on the story. The other new maze this year is called Paranormal, Inc. and it centers around a group of ghost hunters on a fictional reality television show of the same name. Guests enter in through the facade of an old run-down sanitarium where they find said ghost hunters experimenting with their experimental new equipment called the Ghost Pod, designed to summon and capture ghosts. As you might imagine, the equipment does not function quite as planned and the ghosts escape, possessing and tormenting our heroes. The opening scene of this maze is very impressive and features a few truly jaw-dropping effects, but the rest of the maze is somewhat of a mixed bag, with a few really neat things to look at intermingled with long stretches of nothing much. Check it out if you get the chance. Of the mazes returning to Scary Farm from previous years, the most reliable is Trick or Treat. That particular house always offers up a good combination of quality production design and genuine scares. Beyond that, Gunslinger’s Grave has a new “werewolf” theme addition, and the rest are pretty much as you remember them from years past (if you’ve attended in years past, that is). If you haven’t, they are all worth at least one visit.

Also available is the interactive zombie-killing laser tag experience Special Ops: Infected, which requires a free reservation ticket that can be acquired at the beginning of each evening at Knott’s. Like last year, Special Ops is a welcome change of pace as you make your way around the park, as it’s the only attraction that puts guests / players in charge of actually eliminating the attacking monsters themselves.

A good investment is the Skeleton Key, which allows guests access to an exclusive room in more than half of the mazes, and it includes a “Fright Lane” bracelet that allows you to bypass the regular standby line. It might seem like an extravagance to some, but considering how much crowds have grown over the past decade, purchasing it is the only way to ensure you will see absolutely everything Scary Farm has to offer. As always, Knott’s Scary Farm’s centerpiece stage show is The Hanging, a half-hour gore-fest filled to the brim with violence, naughty language, and even more un-PC humor than the average episode of “South Park” (though The Hanging is not quite as funny). This year’s title is “Straight Outta Calico”, though that specific reference only affected a small percentage of the show. Much of the running time of The Hanging is spent skewering the biggest pop-culture moments and celebrities from the past year, and the media output coming from Disney rarely escape its clutches. Targets of this year’s Hanging include Baymax from “Big Hero 6”, BB-8 from “Star Wars: The Force Awakens”, “Ant-Man”, “The Lion King”, and Disneyland’s Paint the Night Parade. Check out the video highlights, but remember they’re definitely not safe for work or kids:

Overall, Knott’s Scary Farm remains a reliable source for scares of all shapes and sizes this Halloween season. I’ve been attending the event regularly for over fifteen years, and as usual I have no major complaints (the re-theming of the Mine Ride into My Bloody Clementine with live performers for the first time in a few years was given more ballyhoo than it probably deserved– I saw maybe three performers throughout the entire ride, if that– but it’s still a creepy, fun ride that’s worth your time). So without any real reservations, I can definitely recommend Knott’s Scary Farm regulars, first-timers, and anyone with a craving for the dark and occasionally disturbing this Halloween. Comments Off on Knott’s Scary Farm 2015 opens with lots of creepy fun, including new Frozen-inspired ‘Dead of Winter’ haunted house