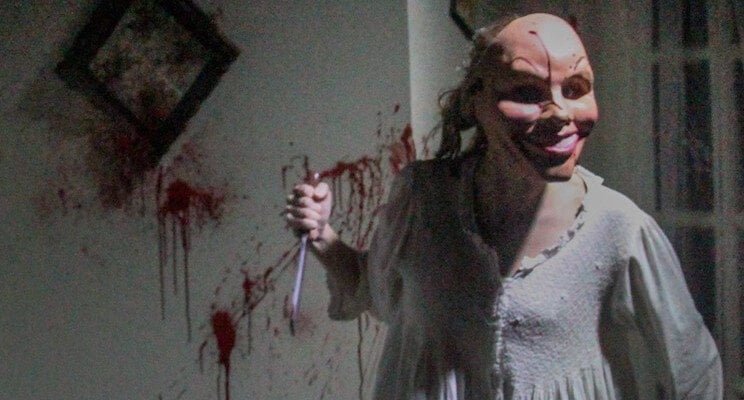 The milestone 25th year brings back many familiar fiendish faces from the past through its shows, scare zones, and haunted houses (more than ever!) to create many evenings of frightening fun.

As always, I am here to review it all. Some years, there are obvious standouts for the best and worst of the bunch. But this year, Universal has so beautifully assembled a perfectly well-rounded lineup of insanity. 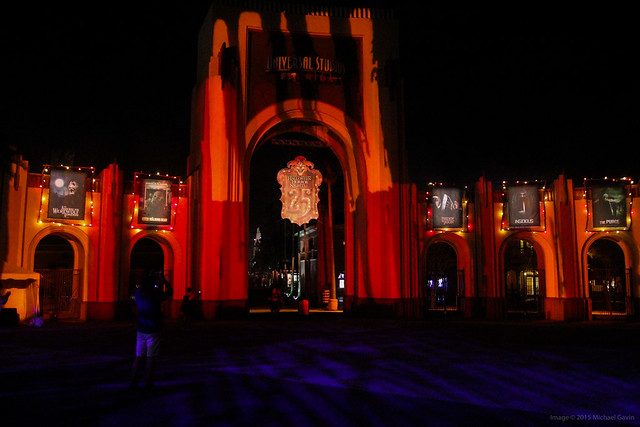 As with previous years, this Halloween Horror Nights event review includes each haunted house, scare zone, and show summarized and ranked into one or more categories: Screamer (scare-filled), Gut Buster (comedy-packed), Eye Popper (visually-stunning), and/or Mind Blower (overall best in show). And in the case of a complete dud, I refer to it as a Grave Digger. Use my thoughts as a guide to help you plan your attack when you visit Universal Orlando’s event and see if you agree.

Read on for my Halloween Horror Nights 2015 review from Universal Orlando.

This year’s haunted houses are among the strongest the event has shown off in a long time. There are nine, more than Horror Nights has ever featured – including one repeat from a couple years ago, a rare occurrence for the Orlando event but a smart move for the anniversary year.

The 25th anniversary can best be compared to its 20th in that both brought back icons, characters, and settings of the past. But 25 does it better, ditching previous attempts to tie it all together under one central theme in favor of independently presenting excellent experiences that don’t have to make sense next to each other to make sense as a whole. It’s altogether a whole lot of fun. REVIEW: What happens when you pull together some of the best haunted houses from 25 years of Halloween Horror Nights history? You get one heck of a crazy experience. Surrounding the evolution of Jack the Clown, guests get to actually watch that character come to form as his insanity evolves across scenes brought back from favorite mazes. There are instantly recognizable scenes and characters from The Forsaken, Scary Tales, Nightingales, House of Horrors, Gothic, and many more. It’s a who’s who of original houses that delighted fans in the past, doing so once again this year. It probably doesn’t make a whole lot of sense to the average guest, but the scares are there to support the disjointed madness. REVIEW: It’s been quite a few years since the Body Collectors last appeared at Halloween Horror Nights. Likewise, it’s been many years since we last saw Psychoscareapy. This year, we see both mashed up as the Body Collectors raid Psychoscareapy’s asylum to produce one hauntingly beautiful maze. With a nod to Winter’s Night, the asylum appears frosted over with a massive facade. Inside, the Body Collectors themselves have begun to harvest the patients of Shady Brook in new and familiar ways. One memorably spine-tingling scene is lifted directly from a previous Body Collectors house while others are all too familiar from asylums of the past. But it all works perfectly as a whole and comes as a close second place this year.

On opening night, Universal Orlando allowed us to take video and photos inside their haunted houses. But they also asked we only release highlight videos of just two of the experiences. REVIEW: Freddy Krueger is my favorite horror icon of all time. Jason is up there. Put them together and you practically can’t go wrong – especially with how Universal executed this fantastic haunted house. First, guests walk through the world of Jason, set in Camp Crystal Lake. Then, guests step into Freddy’s nightmare world featuring scenes from many an “Elm Street” movie. Finally, the two battle it out across real world scuffles and life-sized projections. The sounds and costumes are fantastic and ultimately there is most definitely a clear winner: the fans who pass through this excellent IP house. REVIEW: Yep, that’s right. There’s a 3D house at Halloween Horror Nights this year and it’s not last on this list! I’m as shocked as you are to see a 3D house that’s more than just “trippy.” This house is funny, exciting, and an inventive spin on the classic story. The bright colors make sense for the story and work quite well with the 3D effects, causing just the right amount of disorientation for an “Alice” based tale. It’s very rare that I like a 3D house, so that says a lot. REVIEW: A movie series like “Insidious” is a natural fit for Halloween Horror Nights. It worked tremendously well in Hollywood as a maze in the past and this year it comes to Orlando in a solid experience. It encompasses all three movies, which makes it feel like a lot crammed into a tiny space. The experience was better when it was just the first film in Hollywood. With that said, it’s still incredibly creepy and odd, keeping guests on their toes to the very end. REVIEW: “The Purge” continues to be a great concept for Horror Nights, making a solid translation from the popular scare zones in previous years to a haunted house this year. The chaos works better in the large scale environments of the streets, but is still intense with the close quarters of the maze. There will always be something unsettling about masked home invaders with weapons.

7. An American Werewolf in London REVIEW: I hate that this haunted house is so low on the list, as it was a personal favorite in its debut two years ago. But because it is a nearly identical repeat of the past maze, I had a “been there, done that” feeling while walking through. There are definitely some subtle improvements throughout and first-timers will absolutely love it. But repeat visitors won’t miss much by skipping it only because they’ve seen it before. REVIEW: I had really high hopes for this idea, a haunted house twist on the film “The Running Man.” But the psycho game show concept simply does not translate very well and the maze ends up feeling rather confusing and never scary. It’s amusing at times and has some great visuals and theme park in-jokes (like referring to the Brazilian team as “The Plague”) but overall it’s one that can easily be passed on, sadly.

9. The Walking Dead: The Living and the Dead REVIEW: I’m completely done with “The Walking Dead.” The TV show has come to a slower-than-a-zombie crawl and this haunted house is just as uninteresting. Each new scene is just as unremarkable as the last, each featuring a bunch of chomping undead plodding along at a turtle’s pace. It isn’t the design team’s fault. It’s the dull season 5 that left them with very little to work with. But I suppose the big name still brings in the bodies to the event, so it will continue to be part of it for a while. Thankfully, there’s an extra house this year so we can just pretend there are only eight.

Though the massive props and sets from scare zones of the past are still missing (and missed) this year, what is there is quite enjoyable, especially seeing many recurring characters from the past. Add to that a whole lot of chainsaws everywhere and the screams are once again filling the streets. 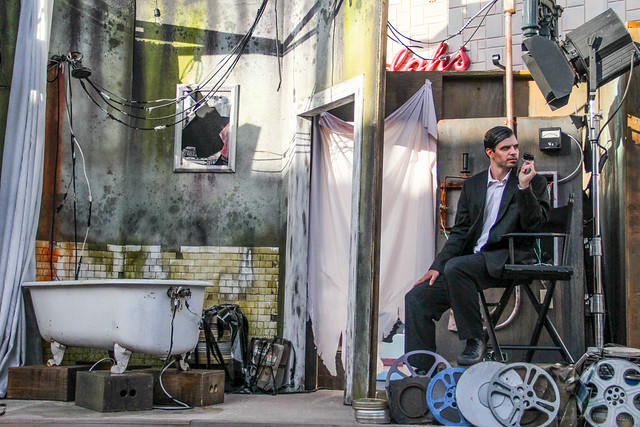 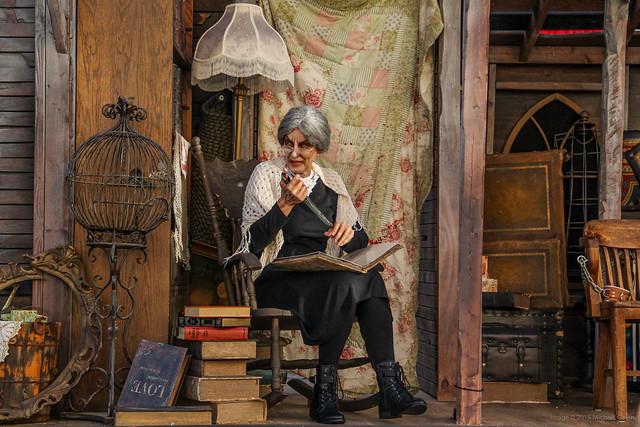 REVIEW: Every recent year has had the “photo op” zone and this year it’s filled with icons of the past. The Director, Caretaker, Storyteller, and more are all here, each with their own stage / set on which they regularly perform some sinister acts. Surrounding them are more creepy creatures matching each of their themes. It’s great fun to just stand around and watch for a while in this area, even if its name isn’t particularly great. 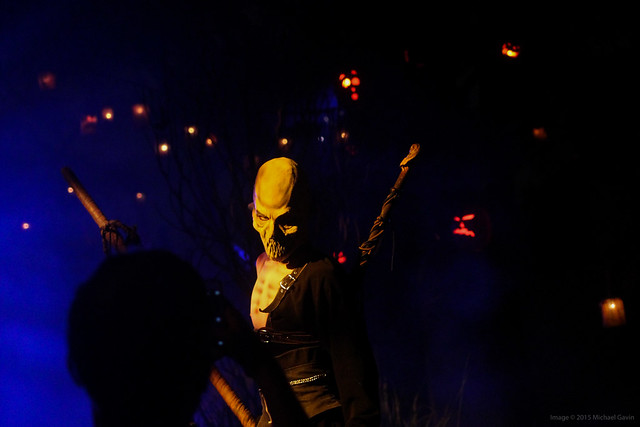 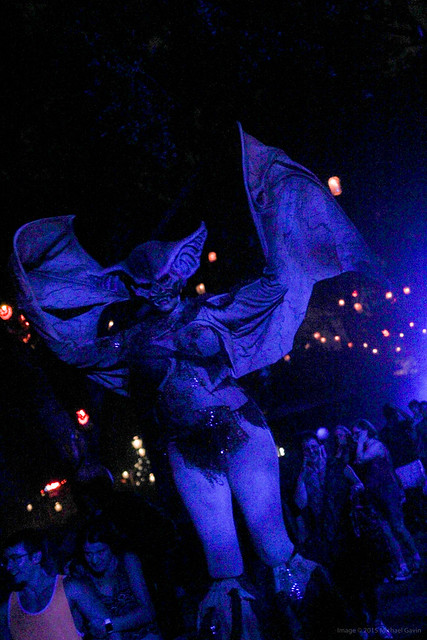 REVIEW: Bringing back elements from “Grown Evil” and year XX, this scare zone one-ups that former one by once again lining a path near the park’s Central Park with trees filled with Jack-O-Lanterns, a much-missed element from the past. This densely fogged zone just feels right. It feels like Horror Nights again. 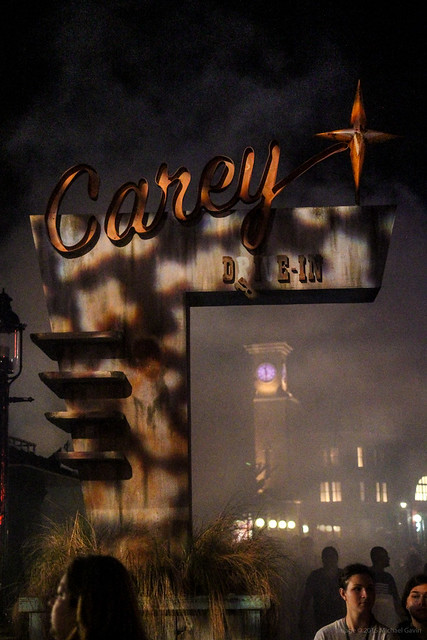 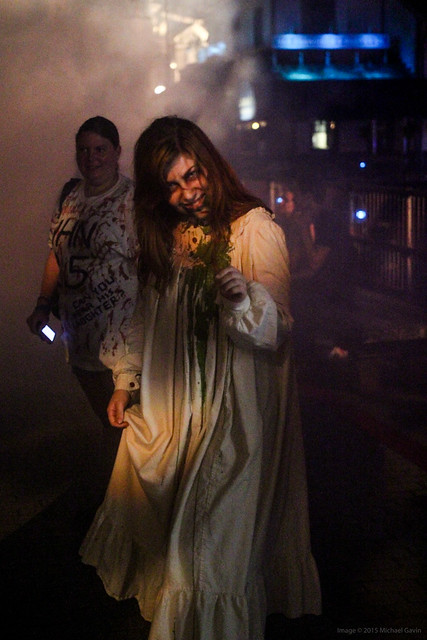 REVIEW: This is the scare zone to revisit throughout the night. There are two entirely separate casts, one in color featuring horror icons like Chucky and Reagan from “The Exorcist” while the other is in black-and-white featuring classic Universal Monsters. It also features a familiar drive-in theme from quite a few years ago at Horror Nights, bringing it all together. 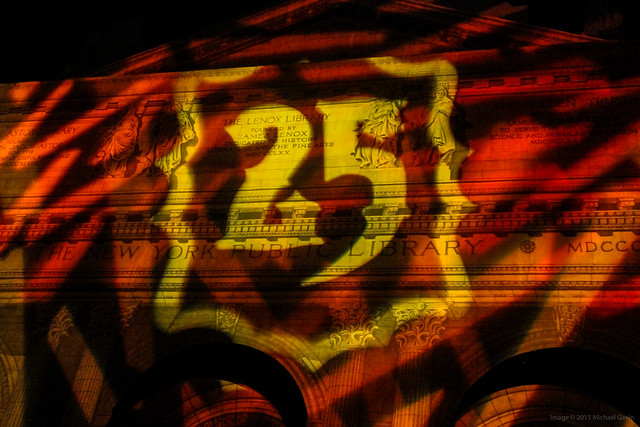 REVIEW: This zone is just like The Purge from last year – but with insane inmates. There are a few set pieces showing a mild-mannered Halloween festival gone horribly wrong. But mostly there are crazies running everywhere doing all sorts of crazy things. They’re actually kind of funny at times. But mostly crazy. And good at making people scream. 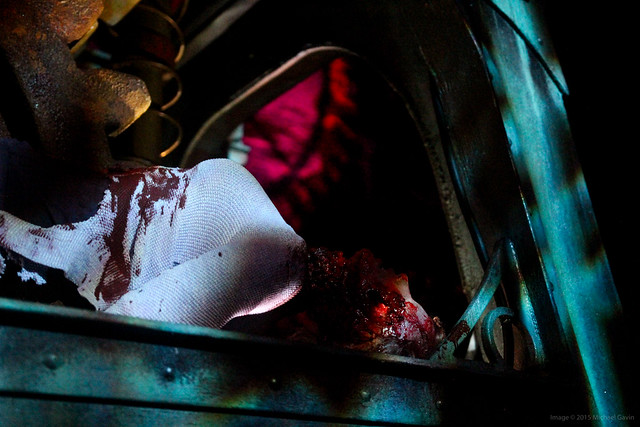 REVIEW: So far, this fairy tale-inspired zone doesn’t really do much of anything. The costumes aren’t quite steampunk enough to be considered as such. And there isn’t really anything scary about them either. Seeing a “steampunk Snow White” feels a bit more like visiting a comic-con than going to Halloween Horror Nights. It has potential, but needs some work. REVIEW: This year’s Bill & Ted show has a strong premise, celebrating 25 years of the event with some great blasts from the past – both in pop culture and in the theme park itself. And there are some of the best Disney jab jokes in the show’s history. But while it opens strong and ends even stronger, there’s a big section in the middle that falls quite flat, leaving the overall impression as very good, but not perfect. There was plenty to poke fun at in pop culture this year and the show includes it all, mostly with really solid laughs. The dancing is definitely top notch and only slightly gratuitous with skimpy costumes, just like it should be. It’s definitely worth seeing once again this year.

REVIEW: Jack is back. So is his sidekick Chance. And together, atop their classic stage across from Mel’s Die-In, this show brings back a lot of Horror Nights memories while sticking to its best formula: pure gruesome insanity. Show up early to get a good spot for an up-close view as it all unfolds. It’s a must-see, no doubt.

Much improved over all previous years, this 25th incarnation of Horror Nights finally features a store devoted to the event with some high-end collectibles added to the lineup too. There are props throughout the store from the past as well as ample merch to make any fan happy.

Halloween Horror Nights 2015 continues on select nights in September, October, and one day into November at Universal Orlando. You can buy tickets now and find more information at HalloweenHorrorNights.com/Orlando.