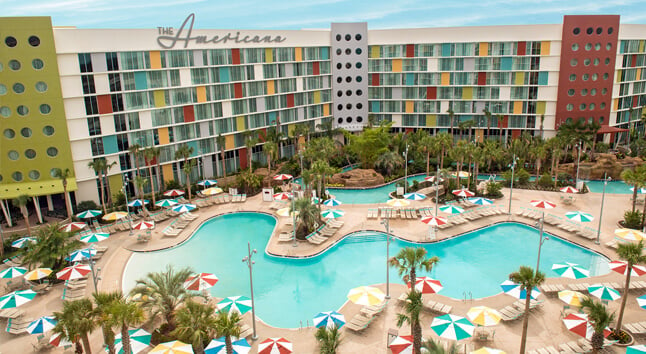 The popular Cabana Bay resort at Universal Orlando has had such success with the incoming tourists in Orlando that they are now planning on opening a 400 new rooms expansion in 2017. See more details in the press release below.

Universal Orlando Resort and Loews Hotels & Resorts are excited to announce an expansion of Universal’s Cabana Bay Beach Resort. Four-hundred new rooms will be added to the retro-themed hotel due to its tremendous success and positive guest response since opening in March 2014.

Opening in 2017, the expansion will consist of two additional towers that will be located at the south end of the property, adjacent to the Continental and Americana guest towers.

In addition to the remarkable amenities and on-site benefits, select rooms in the new towers will offer spectacular views of Universal’s Volcano Bay – the resort’s third incredibly immersive park that will forever change the perception of water theme parks when it opens in 2017.

The retro-inspired Cabana Bay is a destination within itself – featuring a stunning design with bold colors and sweeping vistas that transport guests back to a time of relaxation and endless family fun. Cabana Bay guests can experience remarkable amenities, including two zero-entry pools, a waterslide, a lazy river, a 10-lane bowling alley and more. With 900 existing standard guest rooms and 900 existing family suites, guests can choose between two incredible room options. The family suite is a unique room option that sleeps up to six people and includes two queen size beds, a full-size pull-out sofa, a kitchenette area, a sliding partition for privacy, two flat-screen TVs and a compartmentalized bathroom with preparation spaces for three people at once.

Additional information will be available in the future. To learn more or to make a reservation, call 1-888-273-1311 or visit www.universalorlando.com. Universal’s Cabana Bay Beach Resort is co-owned and operated by Loews Hotels & Resorts in a joint venture with NBC Universal.