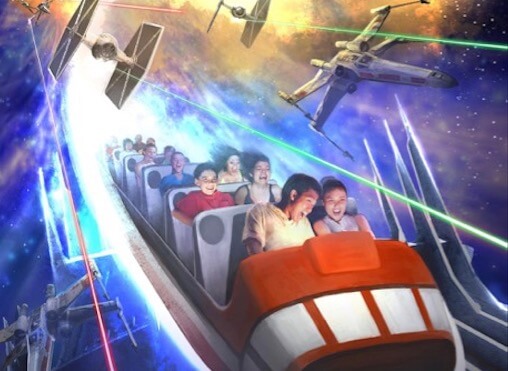 The popular Star Tours ride will be updated with a new destination that features a world from “Star Wars: The Force Awakens” with new characters.

Star Wars Launch Bay will be coming to both coasts later this year and will be featuring a chance to interact with Star Wars characters both old and new, shop for special merchandise and food.  There will also be exhibits props, costumes, and artwork from the upcoming Star Wars: The Force Awakens for guests to enjoy as well as custom Disney Infinity video game content. Star Wars Launch Bay will be located in the Animation Courtyard at Disney’s Hollywood Studios and in Tomorrowland at Disneyland park A new seasonal event like Star Wars Weekends will now be happening in Orlando and Anaheim called “Season of the Force.” This new event will begin in early 2016 and feature at Disneyland the new Hyperspace Mountain and at Disney’s Hollywood Studios an iconic Star Wars firework spectacular. The new Hyperspace Mountain at Disneyland, will be a new version of Space Mountain  featuring new digital projections and a “Star Wars” soundtrack. Check back here for a closer look at all these announcements later today.