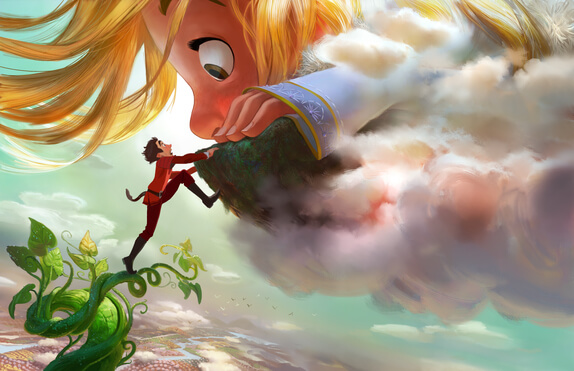 At the D23 Expo 2015, Walt Disney Animation Studios announced their next big fairy tale-based film will be called “Gigantic.”

Description:
Set in Spain during the Age of Exploration, Disney’s “Gigantic” follows adventure-seeker Jack as he discovers a world of giants hidden within the clouds. He hatches a grand plan with Inma, a 60-foot-tall, 11-year-old girl, and agrees to help her find her way home. But he doesn’t account for her super-sized personality—and who knew giants were so down to earth?

As the announcement was made, a giant green beanstalk emerged on the D23 Expo 2015 show floor in the Walt Disney Animation Studios pavilion, surrounded by sound effects of a cow mooing and a giant grumbling:

Artwork was shown during the presentation: