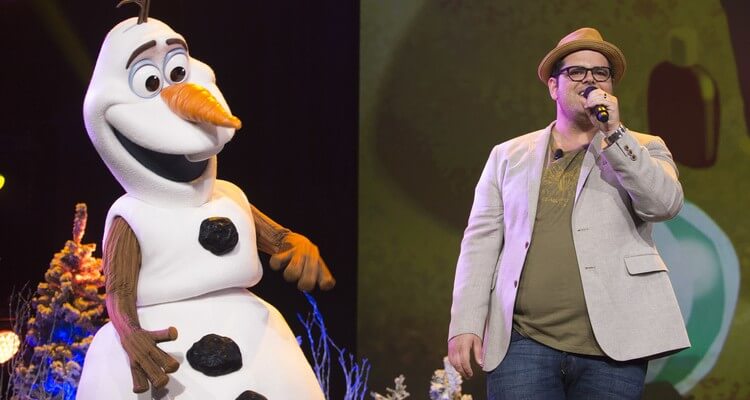 Finishing up the last day of the D23 Expo 2015, fans were treated to a “Frozen Fandemonium” finale, an hour-long musical celebration featuring songwriters Kristen Anderson Lopez and Bobby Lopez along with a rotating cast of celebrities and characters. It started with a demo of an unused Hans song followed by “Love is an Open Door.”

Then came “Making Today a Perfect Day” from “Frozen Fever.”

Then came a deleted troll songs “Join the Jam” and “Try On Someone Else’s Shoe.” Their daughter Annie joined to sing “Fixer Upper,” after which they played a demo of “Do You Wanna Build a Snowman?” Then star power emerged as Anna voice Kristen Bell took the stage to sing “Do You Wanna Build a Snowman?”

Next came the previously unheard song “The Spare” followed by Bell singing “For the First Time in Forever.” Then it was Olaf time with an unused demo called “Hot Hot Ice.”

Josh Gad then came out with Olaf to perform “In Summer.” Finally, the entire group took the stage with Anna, Elsa, and Kristoff to sing “Let It Go.” (Elsa voice Idina Menzel was did not appear.)