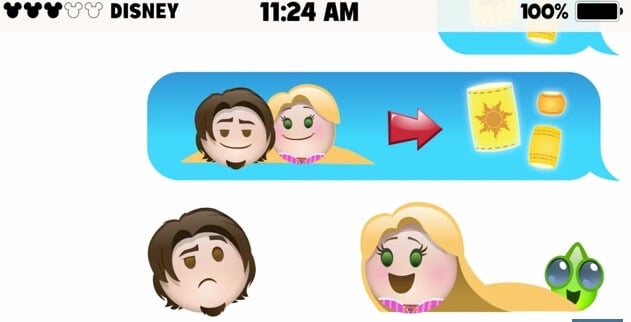 In today’s phone obsessed society most of us are aware what emoji’s are. Disney made sure that we can enjoy our favorites tales in this style, fit for any mobile lover. In the all-new Tangled As Told By Emoji video, fans can watch as Rapunzel, Flynn Rider, Mother Gothel, Pascal and the entire cast of Walt Disney Animation Studios’ film Tangled tell their tale using the mechanics of a smartphone, including text threads, calendar alerts, lock screens and more. The video is the second installment of Disney As Told By Emoji, a new collection of videos that retell popular Disney stories by recasting our favorite characters as emoji living within a mobile phone. The series kicked off in February with Frozen As Told By Emoji, which was viewed more than 10 million times the day of launch and over 22 millions times to date.

Fans can join in the fun and send their own Tangled emojis by downloading Disney Gif, a mobile keyboard extension that lets users easily send gifs and emojis of their favorite stories and characters via text, email, and other messaging and social platforms. Tangled gifs are live now and Tangled emojis will be coming to the app very soon! Disney Gif also features content from Disney’s “Frozen,” “Star Wars”, ABC’s “Scandal,” Disney•Pixar’s “Inside Out,” classic Disney films, and much more.