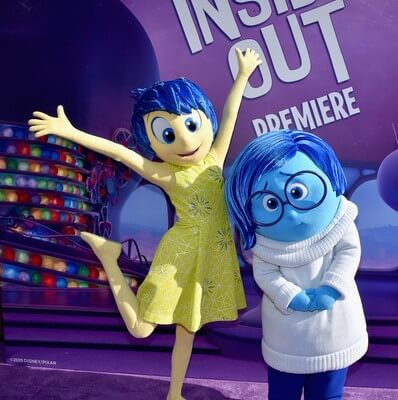 Pixar’s newest movie Inside Out had its big Hollywood premiere yesterday at the El Capitan theater and though we got to see many stars from the movie the most exciting red carpet attendees was the Joy and Sadness meet and greet characters from the movie. The two emotions mixed and mingled with their voice actors counterparts and made sure to take pictures with Pixar head honcho John Lasseter.

The movie is about the Headquarters, the control center inside 11-year-old Riley’s mind. Five Emotions are hard at work, led by lighthearted optimist Joy (voice of Amy Poehler), whose mission is to make sure Riley stays happy. Fear (voice of Bill Hader) heads up safety, Anger (voice of Lewis Black) ensures all is fair and Disgust (voice of Mindy Kaling) prevents Riley from getting poisoned—both physically and socially. Sadness (voice of Phyllis Smith) isn’t exactly sure what her role is, and frankly, neither is anyone else.

Directed by Academy Award® winner Pete Docter (“Monsters, Inc.”, “Up”), produced by Jonas Rivera, p.g.a. (“Up”) and featuring an original score by Michael Giacchino (“The Incredibles,” “Ratatouille,” “Up”), Disney•Pixar’s “Inside Out” opens in theaters on June 19, 2015.