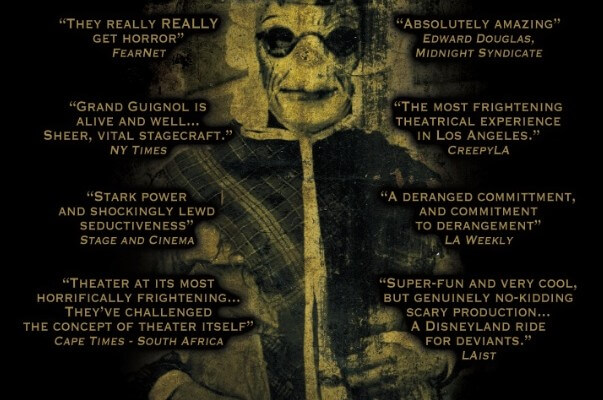 The latest installment of  “Urban Death” has begun at Zombie Joe’s Underground Theatre in North Hollywood, California.  “Urban Death” made its world premiere in July of 2005 and since then has had approximately twenty different incarnations. Although the show has had numerous versions some things have never changed. It is promised to be a night of terrifying theatre with a group of talented performers bearing their souls and expressing their deepest fears. Over the last ten years all installments have been directed by either Jana Wimer, Zombie Joe himself or sometimes both. Zombie Joe’s Underground Theatre in North Hollywood is the home base for “Urban Death”, but there have been special installments of the show performed in New York City, South Africa and conventions like Scare L.A.

Over the last ten years more than 300 original scenes have been created for “Urban Death”.   The latest version of the show is approximately 75% brand new material. Having been to several of the former productions myself, I can easily say that the current show pushes the boundaries more than any other. It certainly seems to be getting more intense and sexual with each new installment. One of the remarkable things about “Urban Death” is that the audiences tend to be full of an equal amount of return guests as well as first-timers. You can always tell the difference. The first-timers often avoid sitting in the front rows afraid of what they are about to get into (as they should be). “Urban Death” really is a unique piece of theatre with no dialogue. It is simply (but not so simply) individual scenes separated by blackouts and each with its own unique piece of music composed by Christopher Reiner.

If your idea of a good night is spending time in a small dark theatre with clowns, zombies and disturbed individuals often murdering or fighting to stay alive, look no further than “Urban Death”. Jeff DePaoli is an entertainer/producer living in the Southern California area. He is co-host of the podcast “Dizney Coast to Coast”. Visit www.DizneyCoastToCoast.com to get your list of “America’s Hidden Mickeys”. @JeffDePaoli on Twitter/Instagram