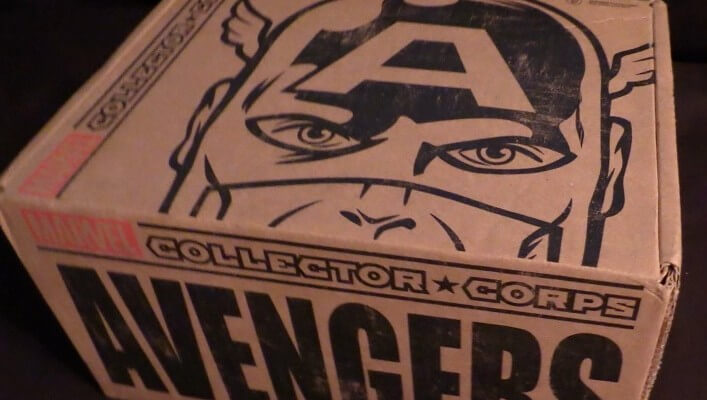 An assortment of Marvel-ous items arrived in my mail box yesterday as the first Marvel Collector Corps Mystery Box has begun to ship.

There’s no mistaking this shipment on the outside, clearly marked with the subscription program’s logo along with “Avengers” and Captain America imagery. But what lies inside this mystery box? Watch below to find out. The first Marvel Mystery Box comes with a nice introductory assortment of goodies. From Funko, a large Pop! Vinyl Hulkbuster and an Age of Ultron “Dorbz” vinyl figure are included – both exclusive to this box. An embroidered patch and lapel pin allow collectors to show off their membership status. An exclusive comic teams up the Avengers with the Guardians of the Galaxy. And a T-shirt completes the set. For Marvel fans, it’s a nice assortment of items, though somewhat expected in variety. Future shipments will hopefully feature a wider array of surprises beyond the usual apparel and standard collectibles. But for an introduction to the series, this first Mystery Box is a fun one to open.

More information and subscriptions can be found at CollectorCorps.com.