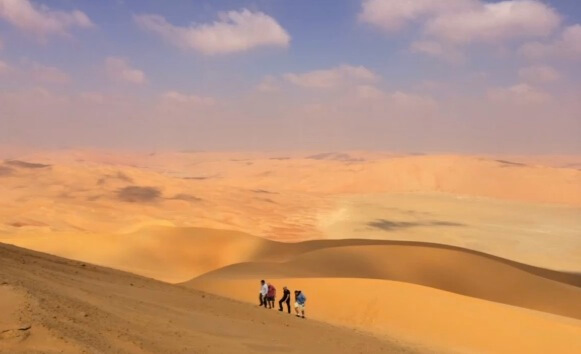 The previously seen desert shots from the trailer were revealed as taking place not on Tatooine, but rather a new planet called Jakku. Shots of J.J. Abrams interacting with a Stormtrooper and Chewbacca on set were also shown. Fans became really excited when Abrams and Kennedy discussed the use of physical sets and practical effects. Both were pictured sitting inside the Millennium Falcon.

But the excitement got even bigger as the new BB-8 droid rolled out on stage along with R2-D2, impressed the crowd. Kennedy noted that it was Disney CEO Bob Iger who found the company to produce the BB-8 droid’s new technology to allow it to be puppeteered on set. Then the new lead cast of actors took the stage, Oscar Isaac, John Boyega and Daisy Ridley, to reveal some new details about their characters and interactions. Isaac’s Poe Dameron is an X-Wing pilot that is sent on a mission by “a certain princess.” Boyega refused to commit to being a good guy or bad guy – or even if he is truly a Stormtrooper.

Fans droid builders were hired on “The Force Awakens” to create droids seen in the film, including developing new droid domes to be attached to X-Wing fighters. Then fans were treated to a new teaser trailer featuring some big surprises!

And that wrapped up this initial panel of Star Wars Celebration Anaheim, which will continue through Sunday.

Comments Off on “The Force Awakens” panel at Star Wars Celebration features new and veteran stars, plus on set look at Chewbacca, Stormtrooper, new desert planet