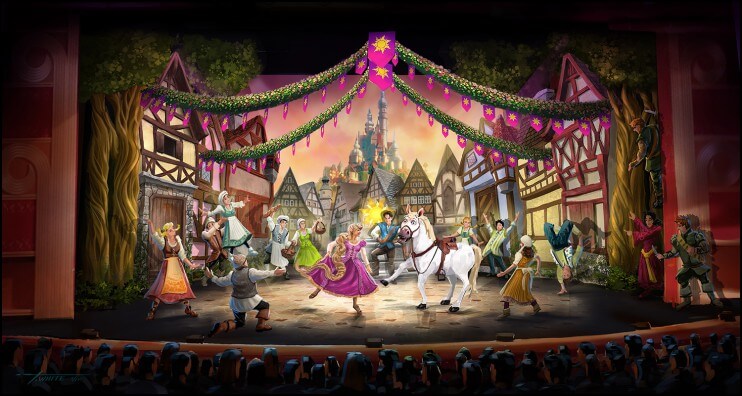 The show will stay true to the storyline from the feature film, with a few special twists to create a live staged production. Favorite characters on stage will include Rapunzel, Flynn Rider, the villainous Mother Gothel and Maximus the police horse.

The story follows the adventure of Rapunzel as she escapes the confines of her tower and the clutches of Mother Gothel, who wishes to shield the secret of Rapunzel’s magical golden tresses and royal roots. Rapunzel strikes up an unlikely friendship with the suave, crown-stealing bandit Flynn Rider, and together they face ruffians, thugs and a budding romance on a hair-raising journey filled with classic Disney playfulness and whimsy that will delight audiences of all ages.

Acclaimed composer Alan Menken (“The Little Mermaid,” “Beauty and the Beast”) and lyricist Glenn Slater, the pair behind the original soundtrack for “Tangled,” have teamed up again to adapt the score and story for the stage, adding three new songs.

Live performances of songs from the movie will include “When Will My Life Begin,” “Mother Knows Best,” “I Have a Dream” and the Grammy Award-winning ballad, “I See the Light.”

Adapting “Tangled” from Screen to Stage

Puppet designer Michael Curry is responsible for bringing Maximus to life on stage via a puppet performer within.

“Tangled: The Musical” joins “Twice Charmed: An Original Twist on the Cinderella Story” and “Disney Dreams… An Enchanted Classic” on the Disney Magic. “Disney Dreams” will also receive a new segment based on “Frozen” beginning in summer 2015.