Like most lands at Disney theme parks, Dinoland U.S.A. has an intricate backstory that, once understood, is meant to unify the land into a coherent storyline. It may not look like the various elements here fit together, but they do!

It begins with the road. As the story goes, the road was here first, and not long after came a tiny little gas station, complete with a gas pump. This was owned by a married couple, Chester and Hester. The road in question is US-498. This sounds like a plausible real road, but the number is a tribute to Animal Kingdom’s opening, which took place in April 1998. For many years, their gas station remained a sleepy area, until dinosaur bones were discovered nearby (the area we know today as the Boneyard playground). 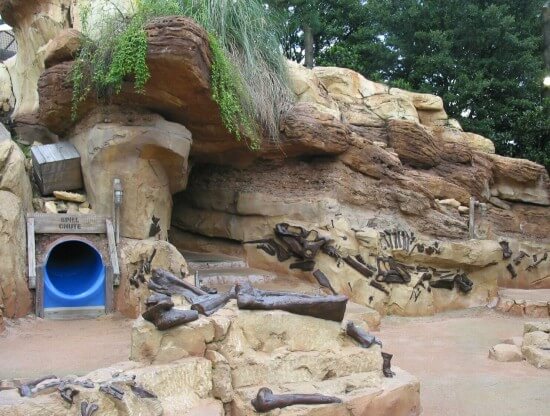 The dinosaur discoveries naturally attracted archaeologists, who needed a place to stay. So they “took over” the nearby Restaurant, naming it Restaurantosaurus in the process. We see evidence of this in their sleeping arrangements in the loft areas of the dining facility. The building wasn’t big enough, so it grew by adding “tents” on one side and fusing mobile home trailers to the other. So many dino bones were found that a museum was created to showcase them all; we know this as the Dino Institute and the home of the Dinosaur ride.

Seeing all the traffic come into the Dino Institute, resourceful Chester and Hester – owners of that original gas pump – began to turn their little gas station into a gift store (just look at the all the glitzy advertisements on the roof).

Their big inspiration was to turn the nearby parking lot into a roadside carnival with tongue-in-cheek dino references, all in an attempt to cash in on the visitors coming for the Dino Institute. 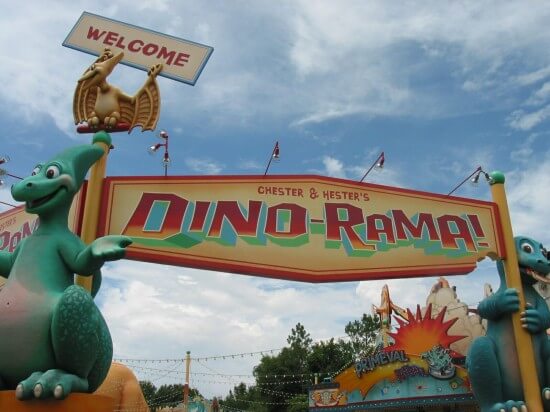 You can see Chester and Hester in a photo in Restaurantosaurus, holding hands. They became fossil hunters themselves, because it, too, generated a revenue stream. 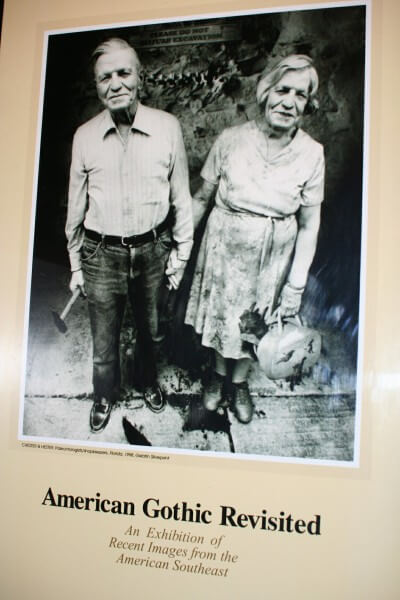