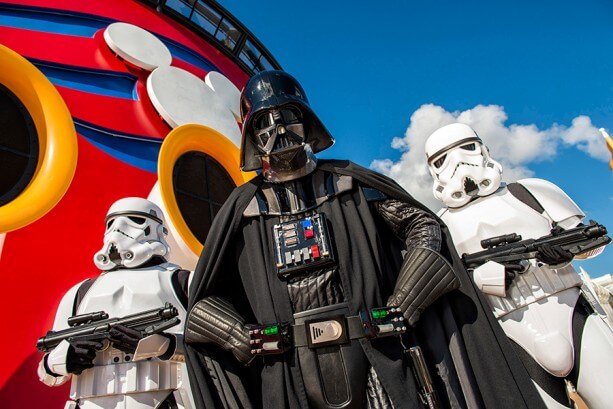 There will also be screenings of the Star Wars films and Star Wars Rebels. You will also have the chance to meet and greet with Darth Vader, Chewbacca, Boba Fett, Stormtroopers and other characters.

Kids and families will have the opportunity to show their knowledge in a game of Star Wars trivia, while the Oceaneer Club and Oceaneer Lab youth club will have some Star Wars-themed arts and crafts, games and activities. Kids will also have the chance to learn some lightsaber moves from a Jedi Master in a new shipboard version of the popular Jedi Training Academy experience.

Make sure to head out to the deck stage for a celebration of the Star Wars saga in a special show, then end the evening with a Star Wars themed fireworks display featuring lighting, sound effects, lasers and Star Wars music.

As the night draws closer, adults entering the night club will feel like they stepped into the Mos Eisley cantina scene, where characters and cantina music set the mood as Star Wars-themed specialty cocktails are served. These special events are called Star Wars Day at Sea and will be on Disney Fantasy cruises sailing January 9, 23, February 6, 20, March 5, 19, and April 2 and 16, 2016 on seven-night Western Caribbean itineraries.