Orlando visitors and locals looking for the most unique new flavors will find them at The Cowfish, a new “Sushi Burger Bar” that officially opened last night at Universal CityWalk.

A spinoff of a concept first created in North Carolina, The Cowfish features the unusual combination of serving burgers and sushi – even mashed up together as “burgushi.” 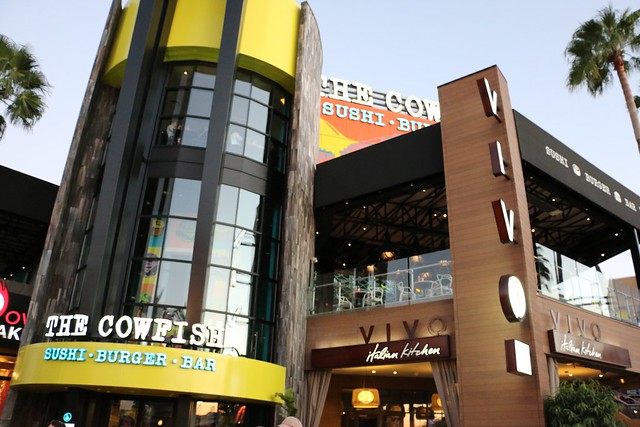 To launch the Universal Orlando version of the venue, The Cowfish founders, Marcus Hall and Alan Springate, oversaw development of the eclectic, three-story restaurant with a truly innovative menu and wonderful views of CityWalk. 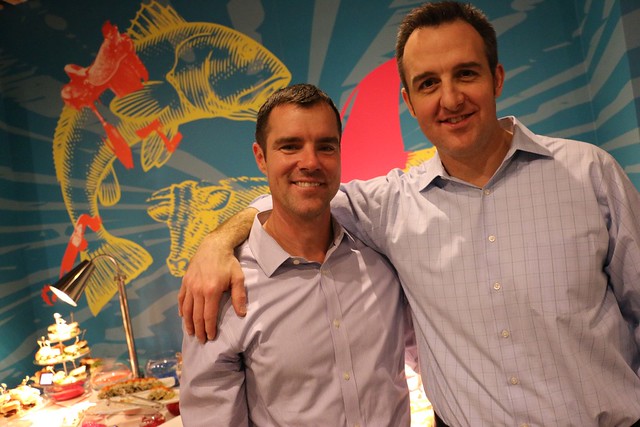 From the moment guests step inside The Cowfish, they’re greeted with smiling faces and a vibrant environment. It’s not a loud, party atmosphere but there’s a noticeable sense of excitement inside that is infectious, permeating from hosts, bartenders, and servers through to every table. 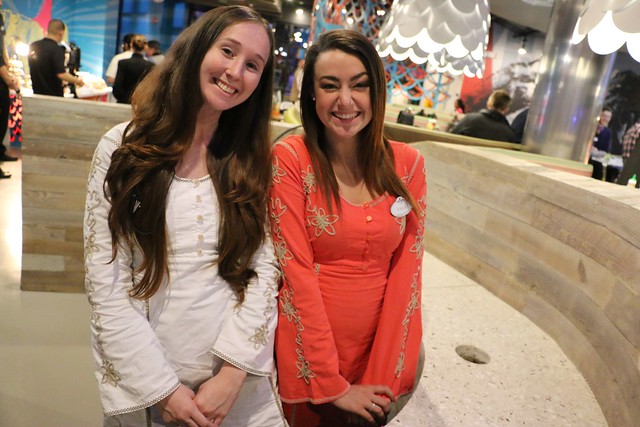 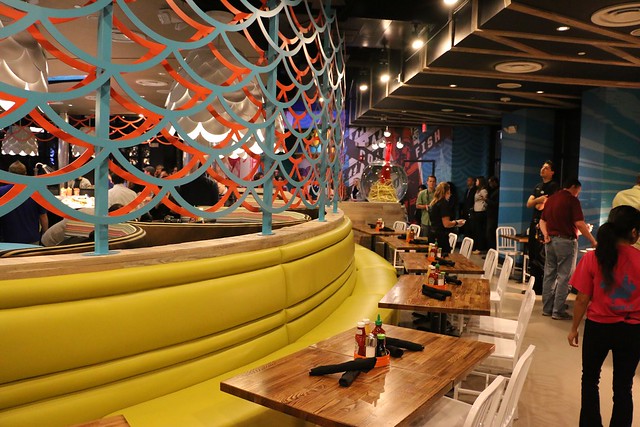 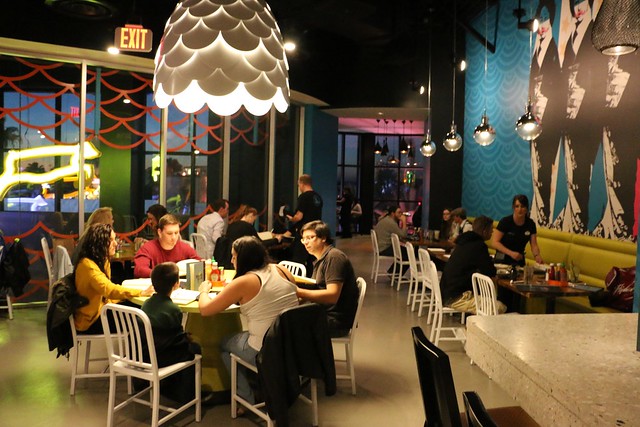 The name “Cowfish” not only comes from the combination of burgers and sushi, but also from a very real sea creature that is on display in the restaurant. Her name is Buttercup. (And there’s a large photo op version outside.) 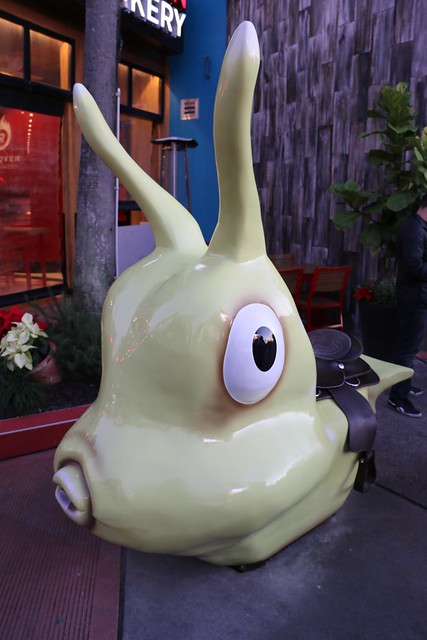 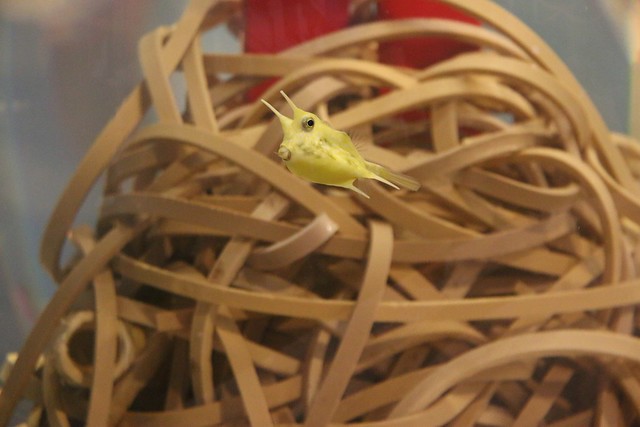 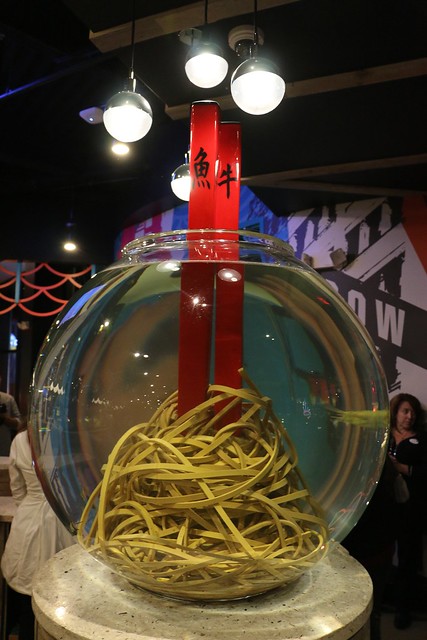 In addition, there are virtual aquariums throughout the establishment that feature digital fish that guests can customize via touch screens. 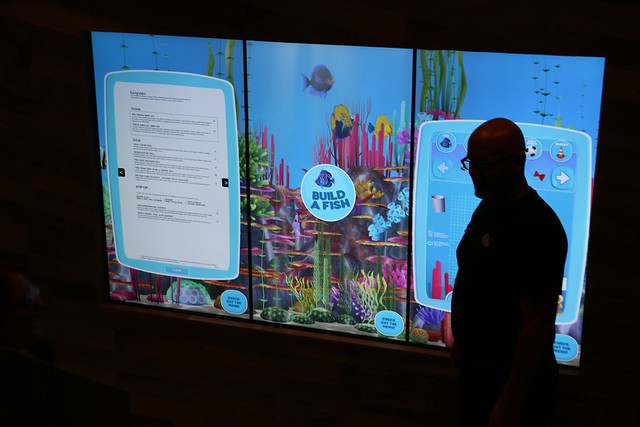 The restaurant’s unique artwork reflects its quirkiness, pop art with Asian influences. Springate notes Universal had to ask them to pull back their wild artwork a bit to make it more theme park friendly. Even the restrooms play bizarre language lesson recordings, translating English to Korean to “redneck,” voiced in part by the Cowfish creators. 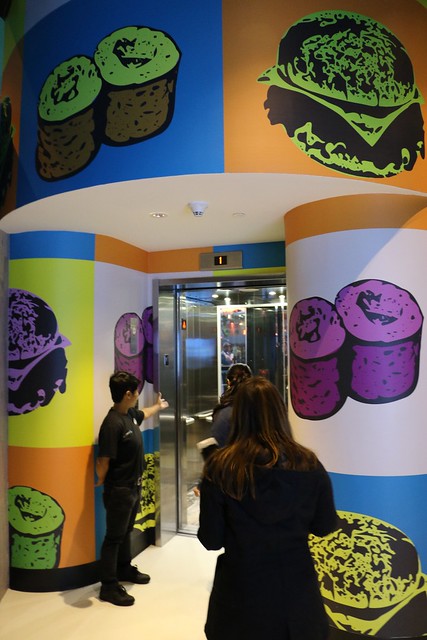 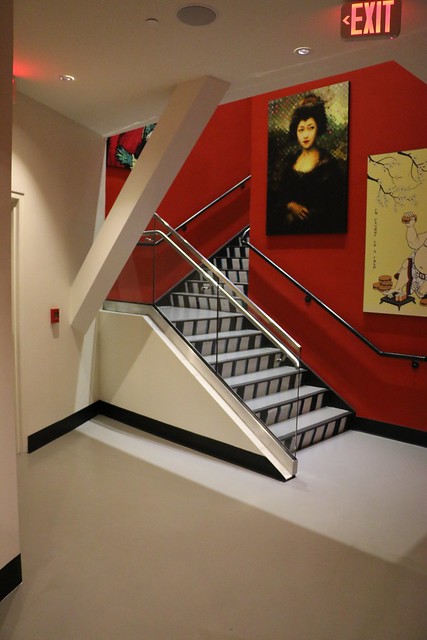 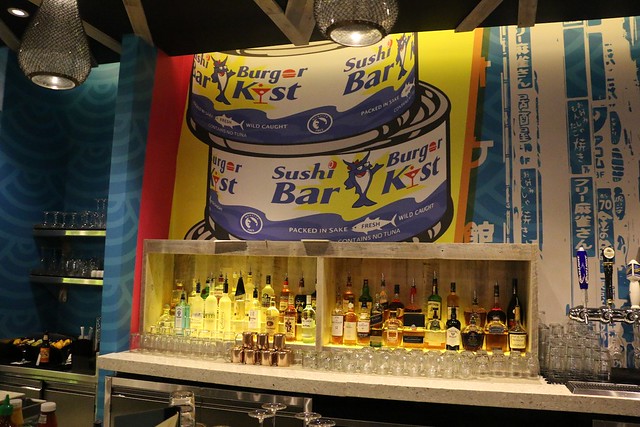 Indoor and outdoor seating is all comfortable, especially with outdoor spaces featuring heaters for cold days. (Yes, it does get cold in Florida occasionally.) 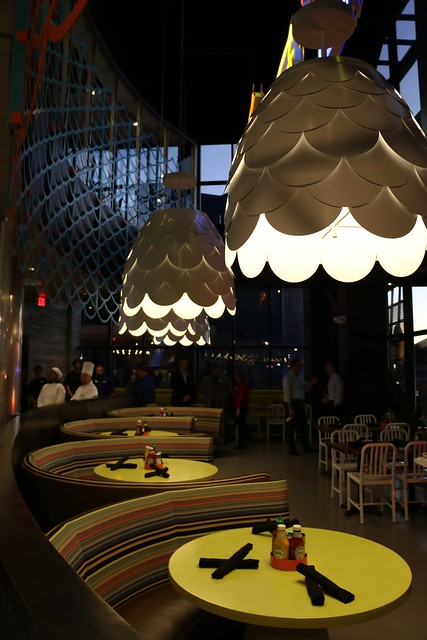 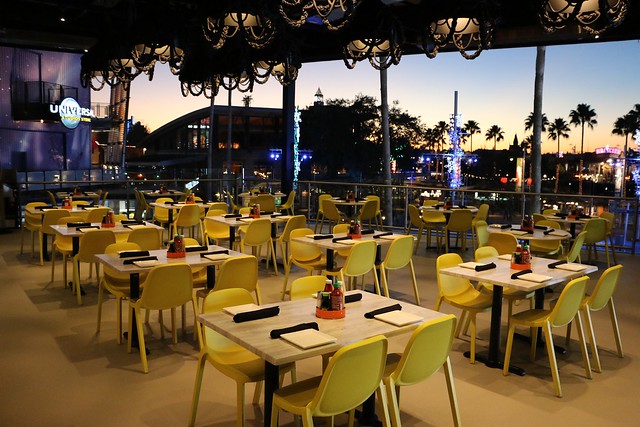 But while the environment is interesting and colorful, the real stars of The Cowfish are in its savory and sweet dishes. The menu is filled with creative concoctions, a little something for everyone. Springate realized years ago that while sushi is certainly popular in the U.S., not everyone likes it and one dissenter can easily veto a group visit to a sushi restaurant. But by adding burgers to the menu, this sushi bar opens up accessibility to everyone. 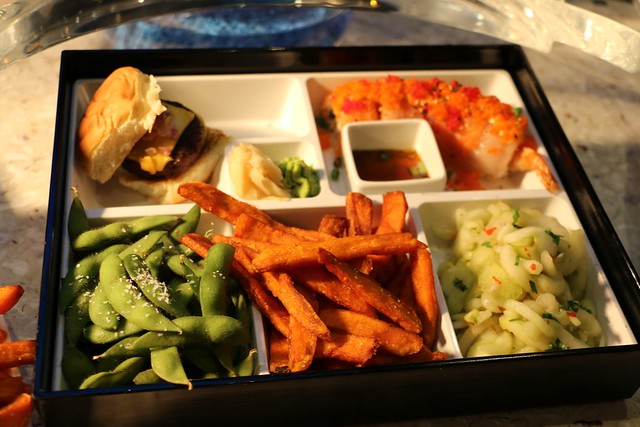 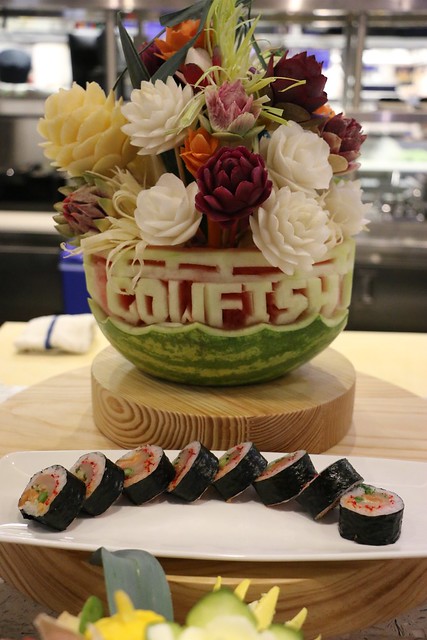 In the kitchen, burgers are prepared completely separately from sushi, then combined in a third area for those who order both. It eliminates the possibility of cross contamination for those concerned with allergies and also allows the Cowfish staff to focus on creating the best versions of their specific cuisine. 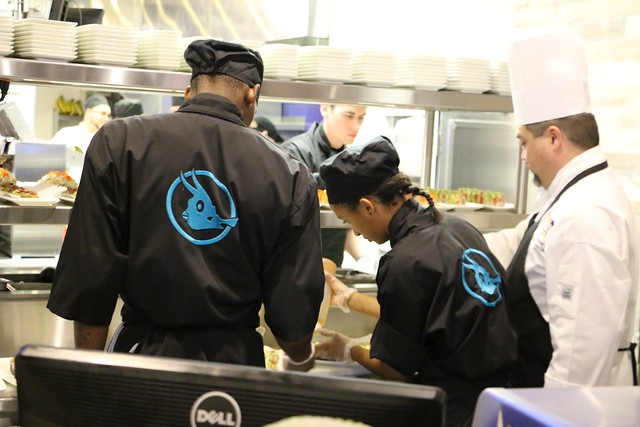 Among the stars of the menu are the Parmesan Truffle Fries (rich!), Dynamic Duo burger (dripping with garlicky goodness!), the Rise & Swine burger (breakfast on a bun!), the Thundering Head Bison Burger (simply delicious!), and the signature “Prime Time” filet & lobster Burgushi roll (one heck of a combo!). 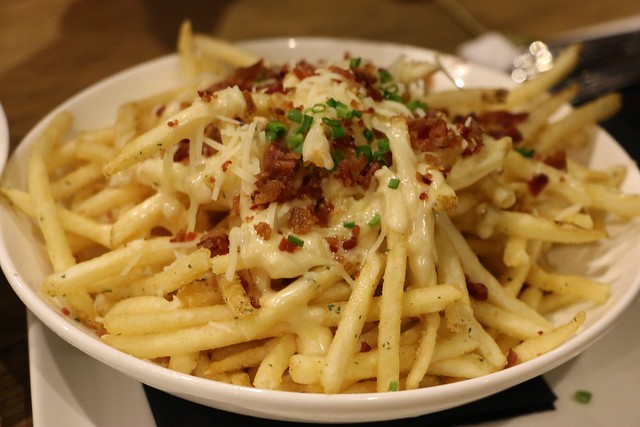 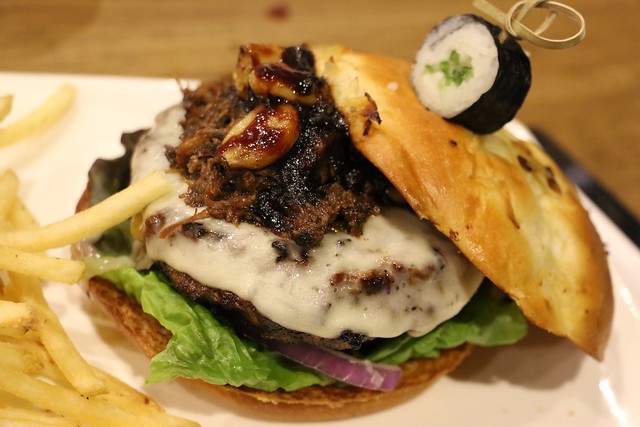 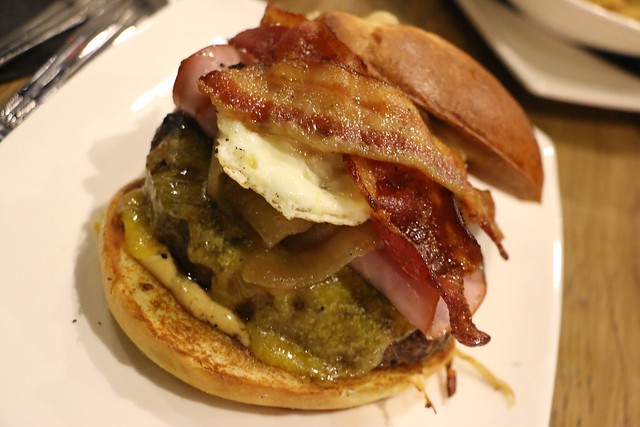 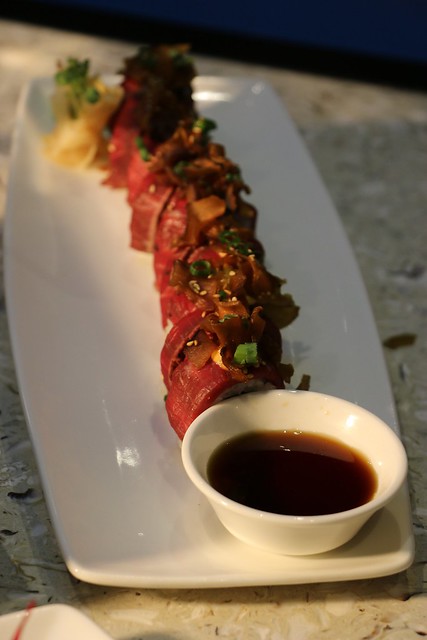 The Cowfish’s bar menu is not to be missed. Much like the restaurant’s decor, its bar menu features many surprises. The Ruby Panther offers a gentle, fruity blend for those looking for an alcoholic drink that won’t knock you over. For those looking for that kick, the Buffalos and Bacon packs a strong bourbon flavor, topped with perfectly cooked bacon. And then there’s the “Not Your Average Float,” featuring root beer liqueur and Session Black lager topped with vanilla ice cream, delicious but extremely strong, perfect for slow sipping with a straw. 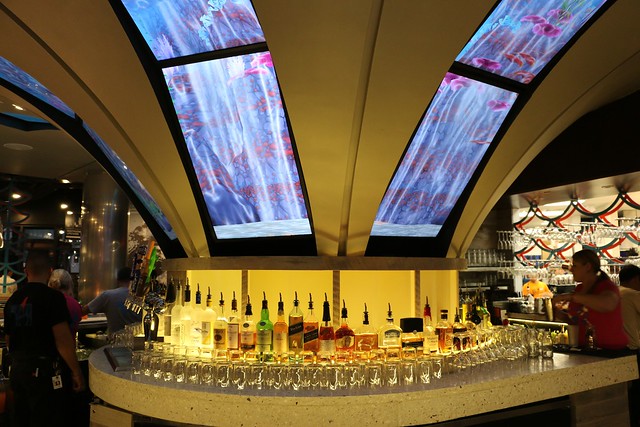 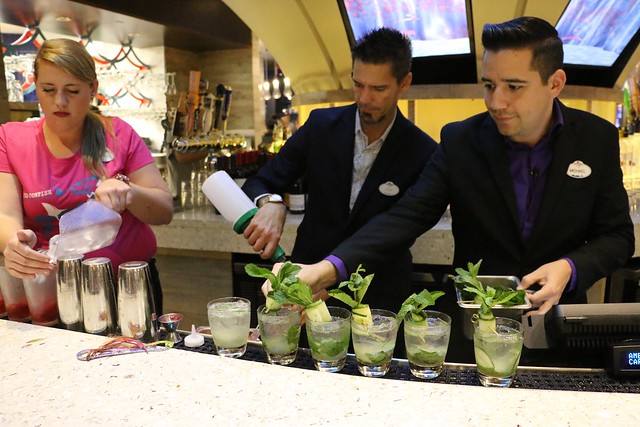 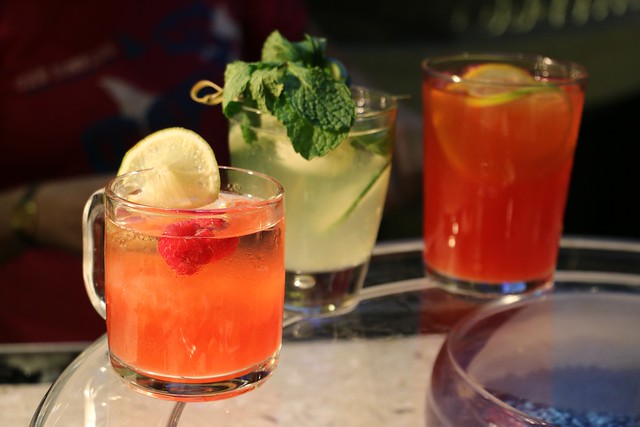 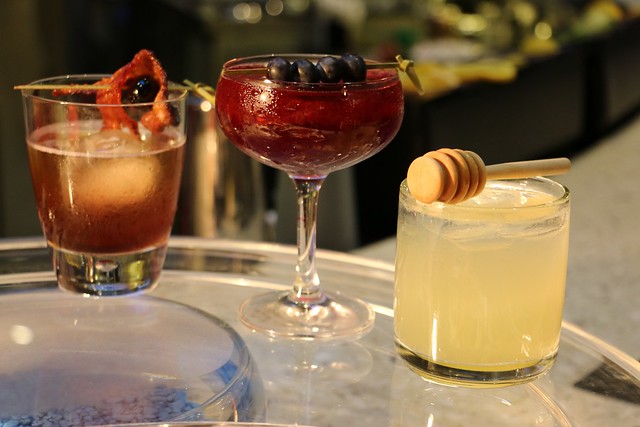 The drink menu truly shines when it comes to dessert time, particularly in the “Orange Ya Glad I’m Back” rum and vodka shake that drinks like a melted creamsicle and the Chocolate “To Dive For” Godiva liqueur shake that is simply, well, to die for – a must try. There are non-alcoholic shakes too, among the best of which is the Marshmallow Crisp, which tastes like drinking the Stay Puft Marshmallow Man. (Let that sink in…) 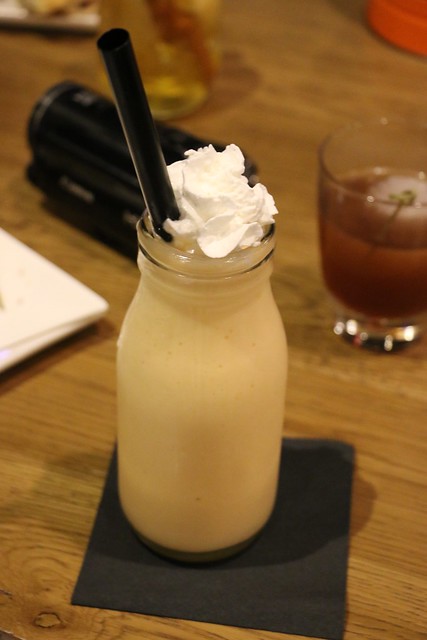 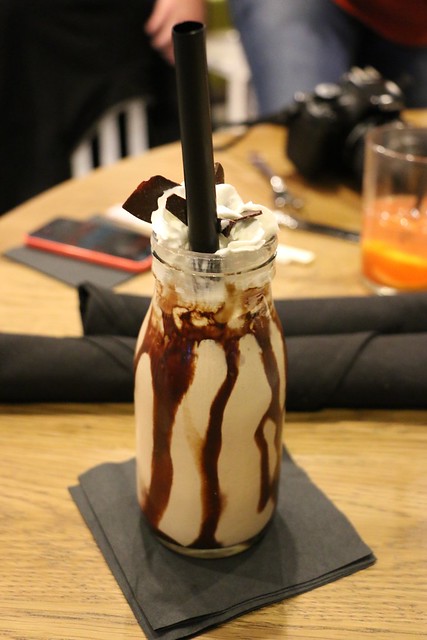 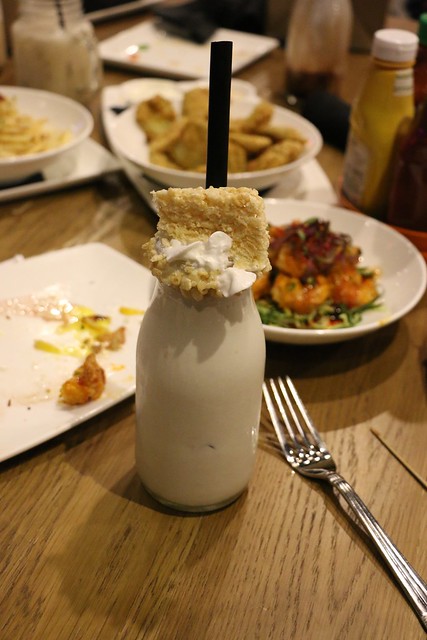 While the burgers, drinks, and shakes are all bold in flavor, the restaurant’s sushi is not too memorable. It’s by no means bad, but easily out-shined by the rest of the menu.

The grand opening of The Cowfish completes the first year-long phase of Universal Orlando’s CityWalk makeover, which included Red Oven Pizza Bakery, Antojitos, Vivo, Hot Dog Hall of Fame, and Bread Box, among others. Universal has already begun demolishing the old NASCAR Cafe to make way for a new eatery, which has yet to be announced. Details on the next phase of Universal Orlando’s ongoing expansion and upgrades are expected to be announced early next year.

More photos from The Cowfish at Universal Orlando CityWalk: