“Trattoria” means a casual Italian eatery and “al forno” describes food that has been baked in an oven. Disney’s new restaurant lives up to its name with a cozy, relaxing environment serving up delicious dishes, most of which are indeed fresh from the oven. 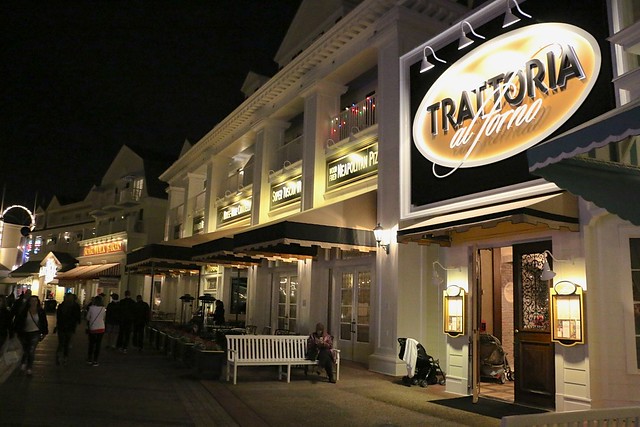 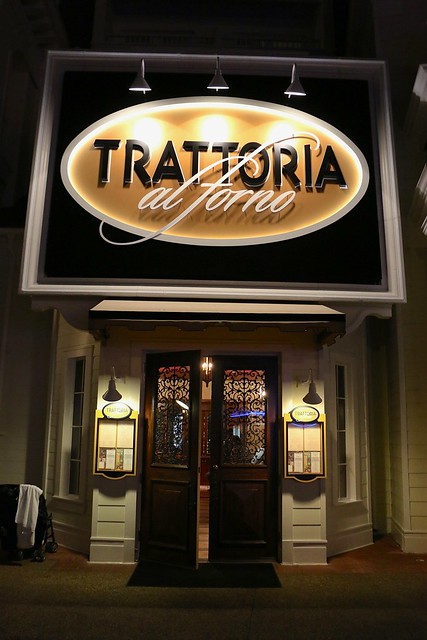 Stepping inside the restaurant feels like entering a large, fancy house. Warm woods with brick accents and Earth tones are inviting while cushy seating allows patrons to wait comfortably for a table. Walls are lined with vintage photos of Italian families, giving the impression that someone’s grandmother is in the kitchen cooking up a feast. 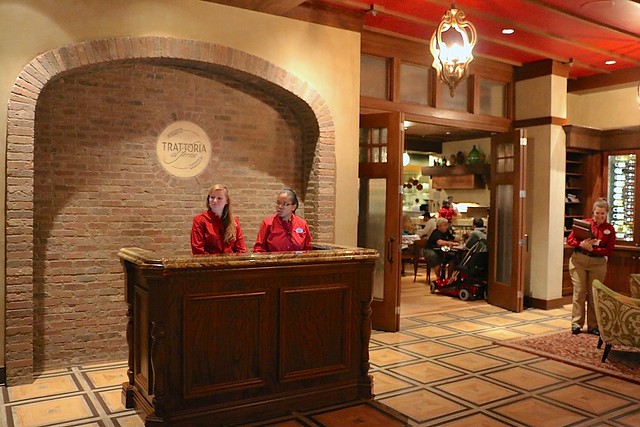 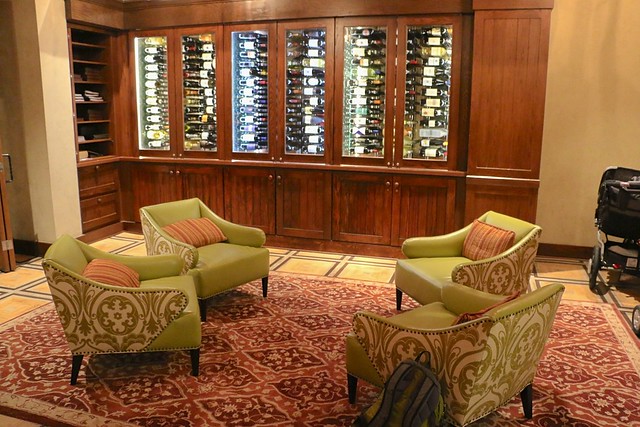 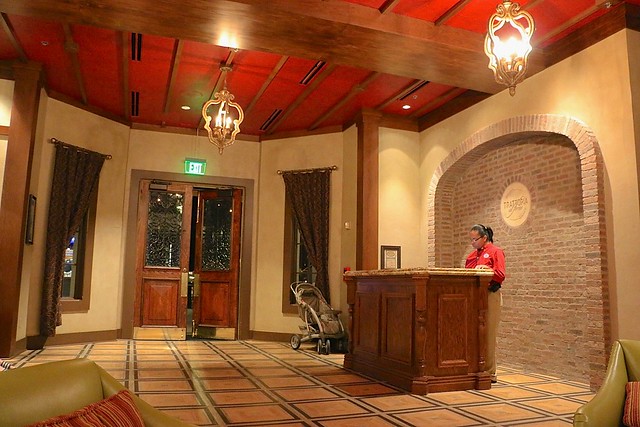 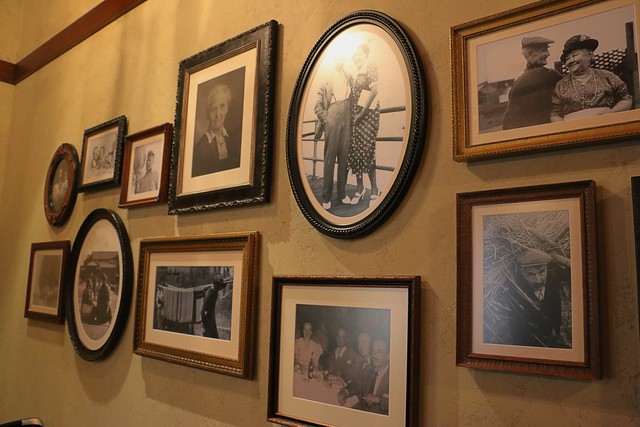 But upon stepping into the dining room, it’s quickly clear that there are most definitely professional chefs at work here, seen whipping up dishes in an kitchen that’s open to the equally inviting, ample seating. The configuration is roughly the same as when the location was Kouzzina, but its new look is even more casual and welcoming. 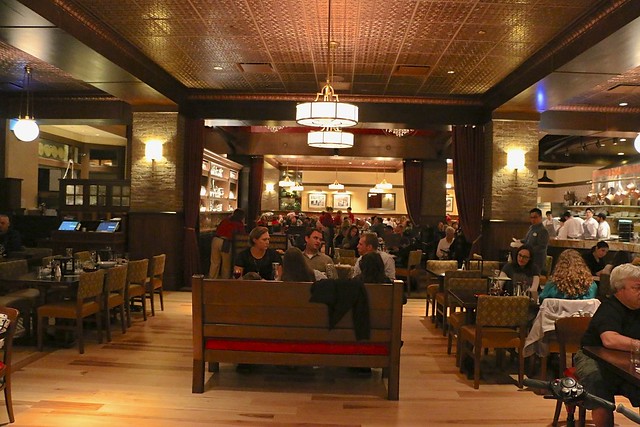 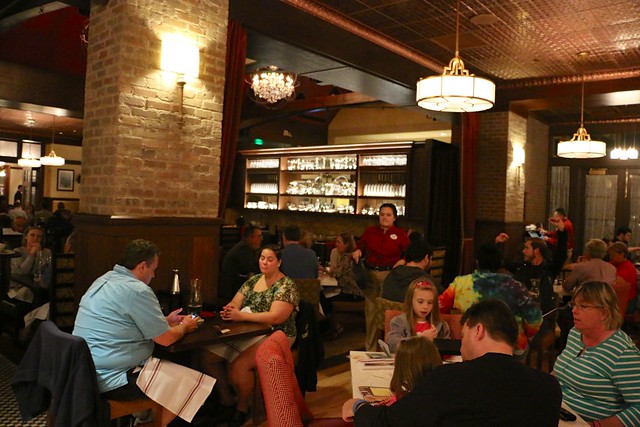 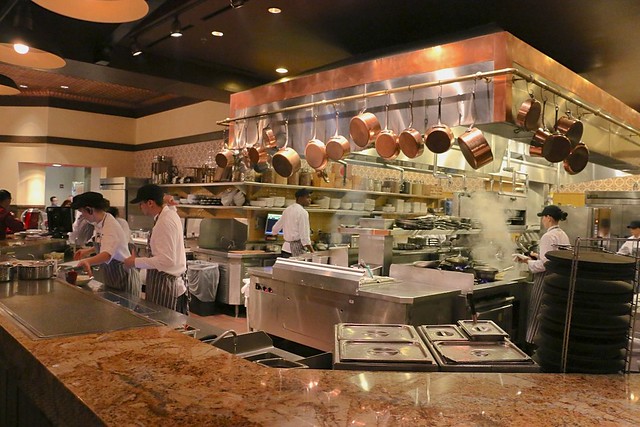 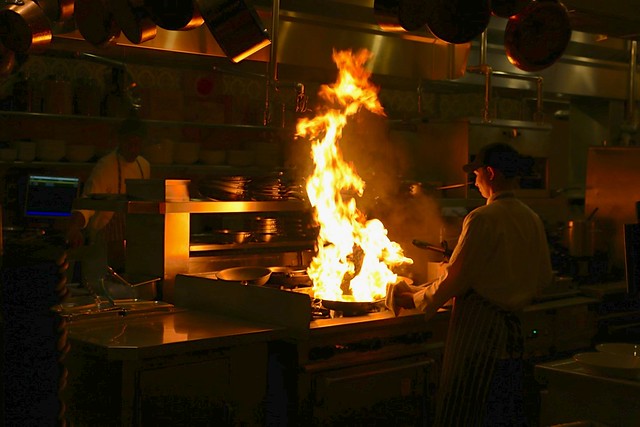 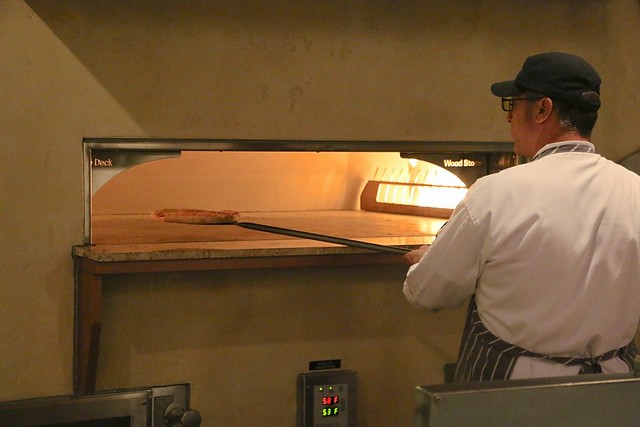 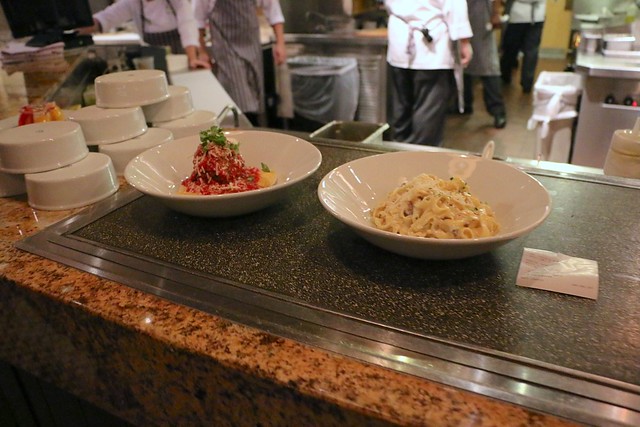 Service begins with warm, crusty Italian bread, perfect for sopping up olive oil, which guests can pour themselves. 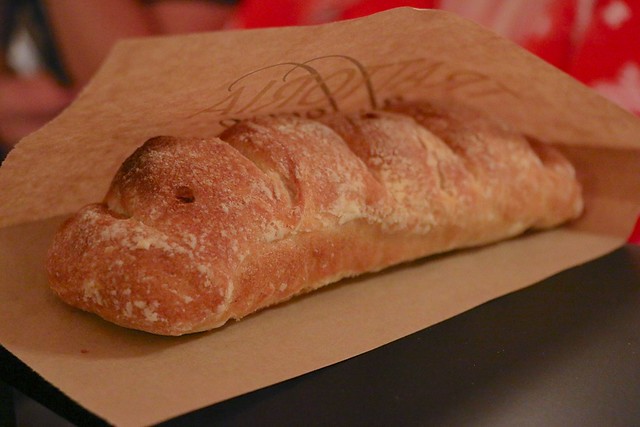 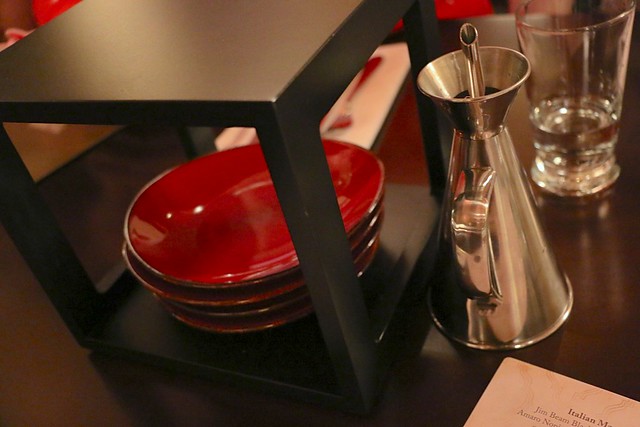 The drink menu features a variety of beers, wines, and specialty cocktails. The drink menu’s front page Rossini is equally vibrant in color and flavor, with light and bubbly prosecco amplified by wild strawberry liqueur. 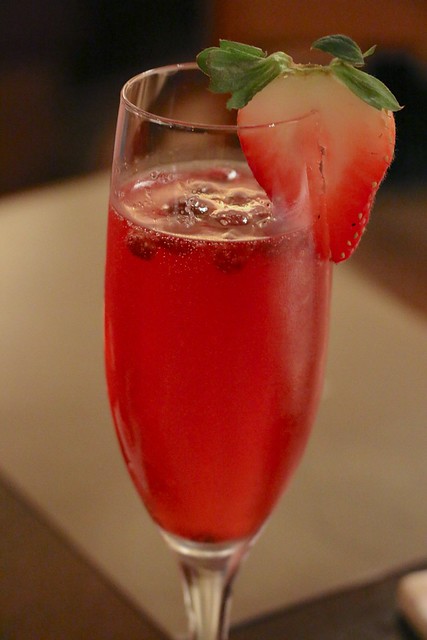 Italian beer bottles should be ordered like wine. Expect much more than a single glass to come out of these large bottles. 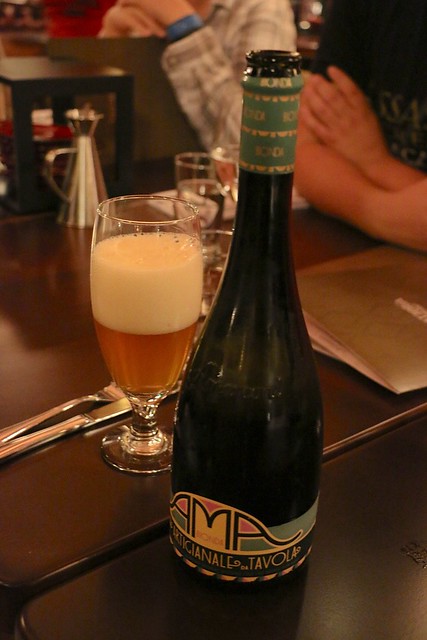 From antipasti to entrees to dessert, Trattoria al Forno keeps dishes simple but with well developed flavors. There’s nothing cliche about these Italian plates. Even staples are given a twist, such as lasagna made with turkey. 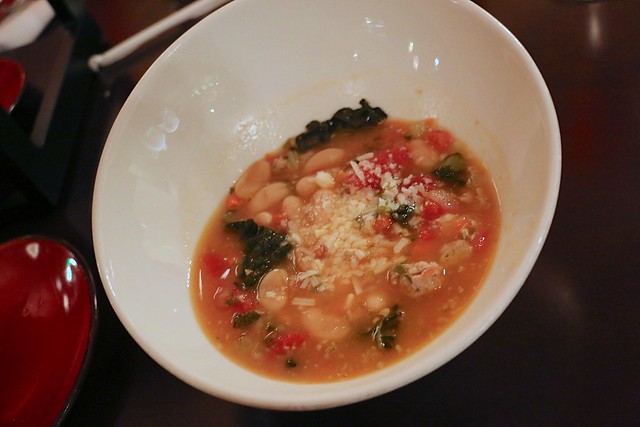 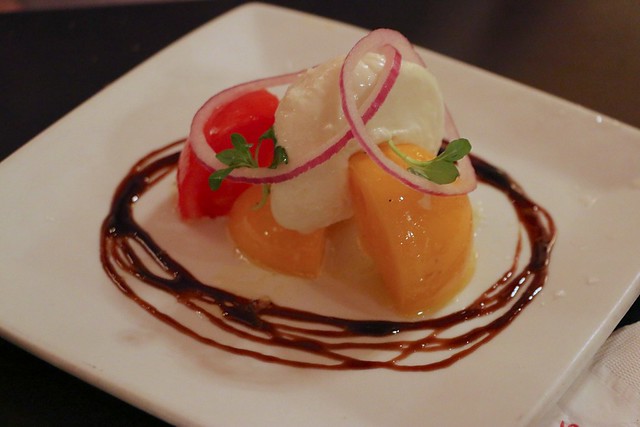 While there is no cheese plate or course at Trattoria al Forno, there is an enjoyable assortment of sliced meats and olives – enough for two. 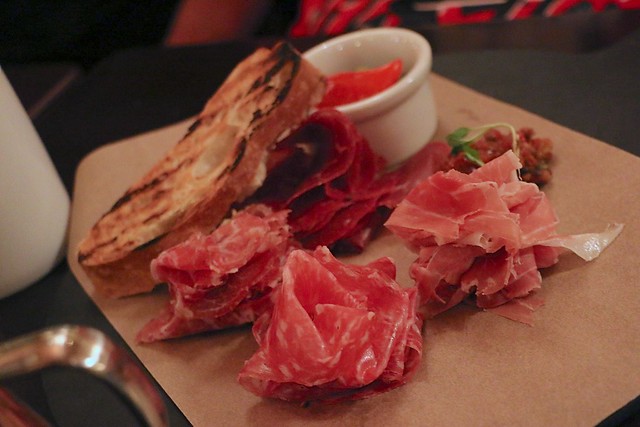 Entrees are quite varied, separated into pastas, pizzas, and meats and fish. Pizza are extremely thin and crispy, as a true Italian pizza should be. Don’t expect anything resembling Chicago style or even your average delivery pizza here. Light on sauce and cheese, these pizzas are served with small slices. With appetizers and desserts, these pizzas can serve two, but eaten alone they may only be enough for one.

The Truffle pizza packs a strong truffle oil flavor in place of red sauce, lightly topped with cheese, able to be savored with every bite. Smoked Prosciutto and Potato pizza is particularly unique, tasting like a whole meal in each bite. 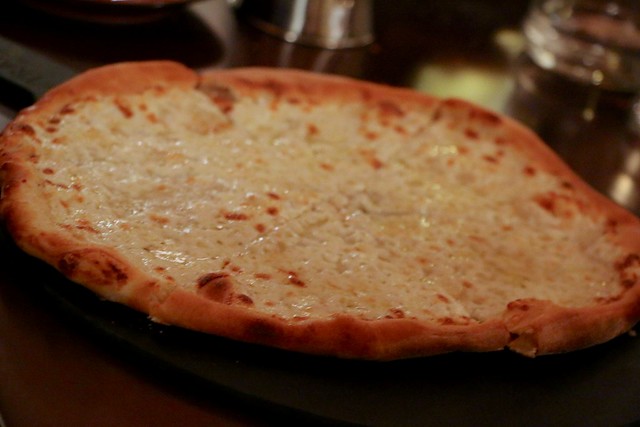 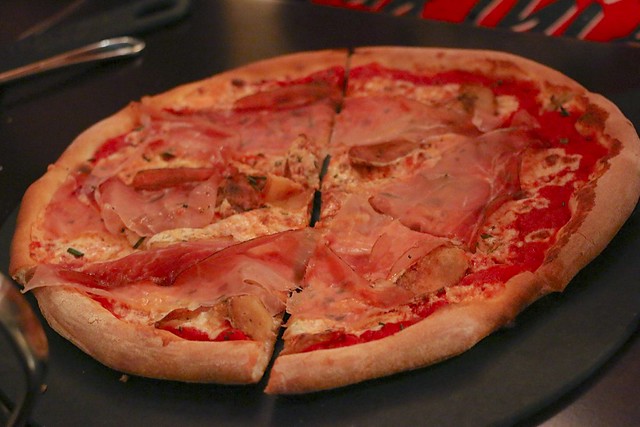 The priciest dish on the menu is the T-Bone Steak Florentine, served with roasted potatoes and broccolini. It’s a thin steak and easily overcooked, so don’t be afraid to send it back if it’s killed on the grill. This cut deserves to be made medium rare and is enjoyed best that way, juicy and well seasoned with plenty of char – no steak sauce needed. The accompanying sides are equally enjoyable. 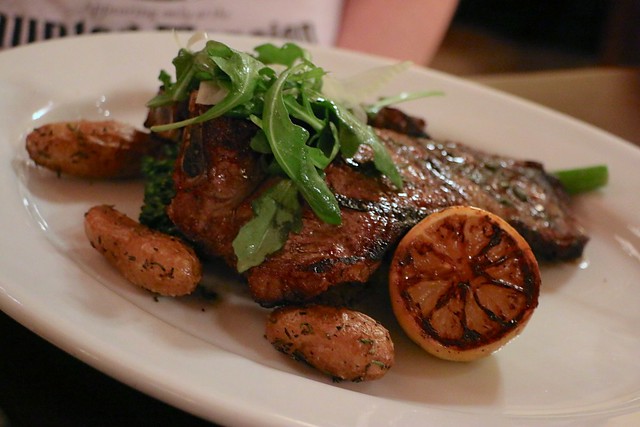 Another excellent entree is the Braised Beef Bolognese, featuring one of the menu’s two freshly prepared pastas in-house, the cavatelli. (The other is the tagliatelle that’s served with the Chicken Breast alla Parmigiana.) The beef is fork tender, easily falling apart with a gentle tug. The dish is covered in a hearty red sauce, which is clearly cooked with the beef, which has infused into the rich sauce. If anything, this dish needs a little something to brighten it up, as it’s nothing but savory flavors. 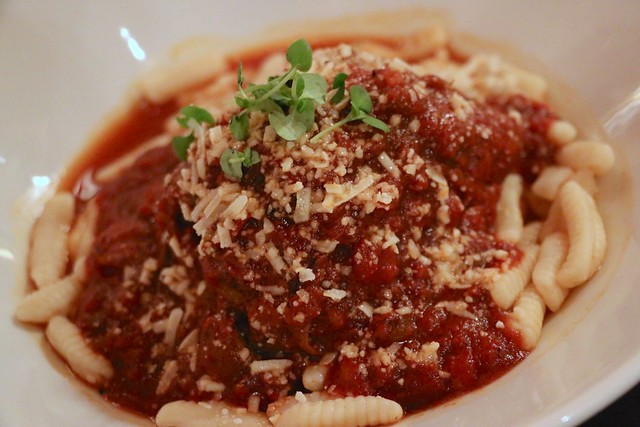 Dessert is the weakest of the courses. The trio of cannolis is fantastic, each containing half pistachio filling and half chocolate chip. But the Lemon Panna Cotta, while delicious, is almost entirely lacking its namesake lemon flavor. The Piedmont Hazelnut-Chocolate Cake is absolutely nothing special, with the accompanying oranges and hazelnuts topping the cake serving as the best parts. 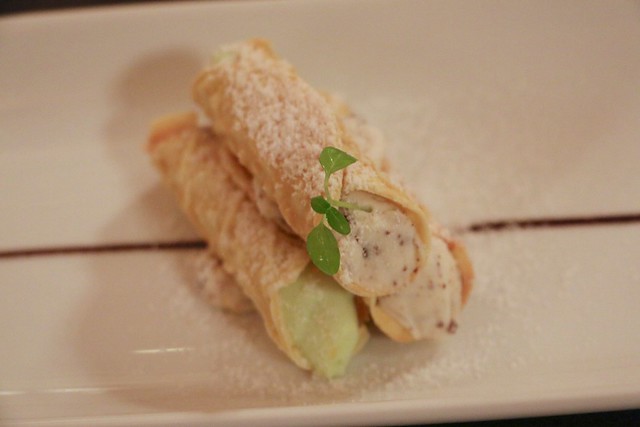 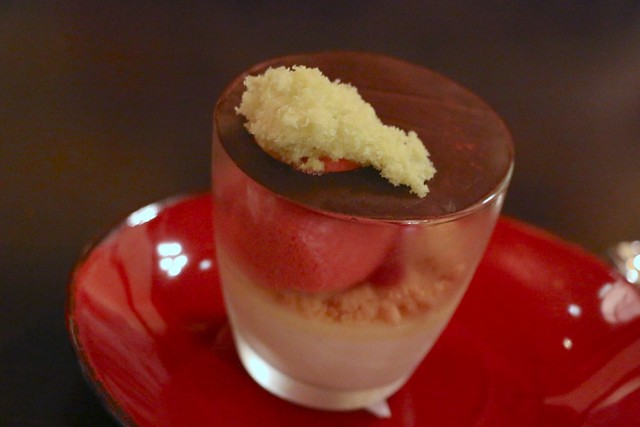 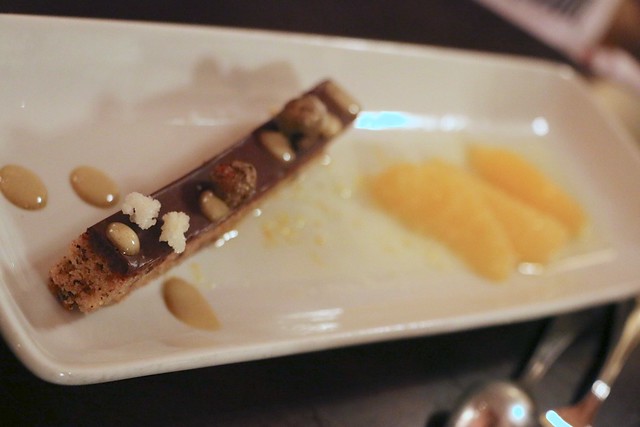 The cost of a 3-course meal for two people and one alcoholic drink came to around $110 plus tip. It’s a little pricier than the food warrants, but not too much considering the uniqueness of the entrees and the comfortable atmosphere. Nothing in this restaurant looks, feels, or tastes “cheap.”

Trattoria al Forno joins a long list of Italian restaurants, not only in Orlando but even at Walt Disney World. Some are better, and many are worse. But this new establishment definitely holds its own by serving rustic, accessible dishes in a comfortable, casual environment. The menu will surely be tweaked in the weeks to come, but was largely a success on opening night and well worth trying any time.