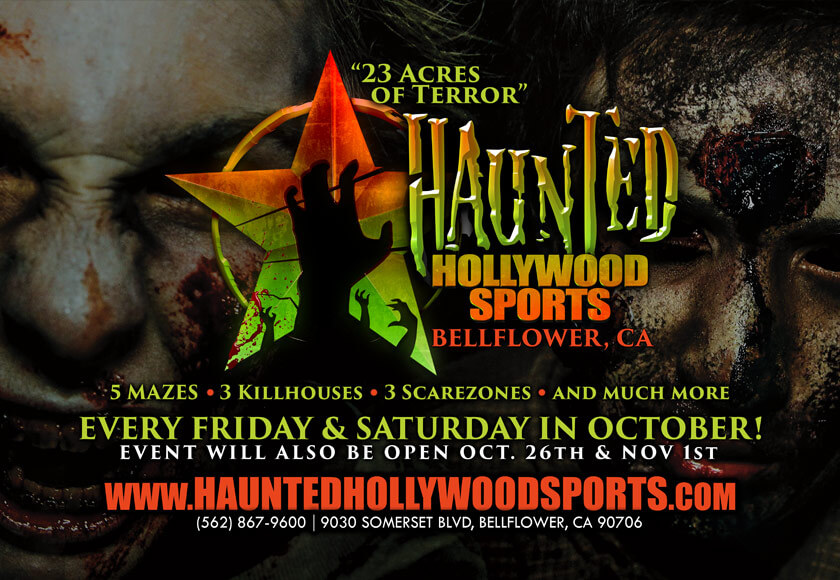 At Haunted Hollywood Sports in Bellflower California, you will have a blast of a time defending yourself from a zombie apocalypse.

As you enter “kill houses,” you’re armed with eye protection – a protective vest and a gun of your very own loaded with pellets to shoot at the zombies. It’s like stepping into your own video game. While guided through the battle grounds, zombies attack from all directions revealing themselves from every crevice and hiding spot in the field. It is now your turn to pull the trigger and knock them to the ground. But beware. They won’t be staying down for too long. This adventure will get your blood pumping in a way unlike any traditional haunted house. At Haunted Hollywood Sports there are two kill houses called “Zombie” and “VooDoo” as well as a shoothouse called “Last Stand,” which is like a mix of a kill house and a shooting gallery. It’s all great fun. If traditional haunted mazes are more your thing, there are plenty of those too including “Legends of BlackStar Canyon”, “Fort Bedlam Zombie Research”, “Venom” & “Fog Hollow”. In addition to mazes and kill houses, there are scare zones “Carnival of the Damned”, “Undead” & “The Massacre”. But Haunted Hollywood Sports lives up to its “sports” name with even more entertainment. There’s also a rock wall, a shooting range and other attractions. Many special events are planned throughout the Halloween season too.

It is strongly encouraged that you check out the site www.HauntedHollywoodSports.com before arriving to plan an evening there, to see what scheduled events there are to experience on specific nights. Not all attractions are included with a general admission ticket. Anyone looking for a fun Halloween haunt that’s a bit more involved than traditional walk-through mazes should check out the many zombies waiting at Haunted Hollywood Sports. They’ve done a great job making you feel like you’re going through military training to defend yourself from a zombie takeover. And maybe some day that will come in handy. Jeff DePaoli is an entertainer/producer living in the Southern California area. He is co-host of the podcast “Dizney Coast to Coast” and can be seen in the feature film “Jersey Boys” directed by Clint Eastwood. www.JeffDePaoliEntertainment.com @JeffDePaoli (Twitter/Instagram)