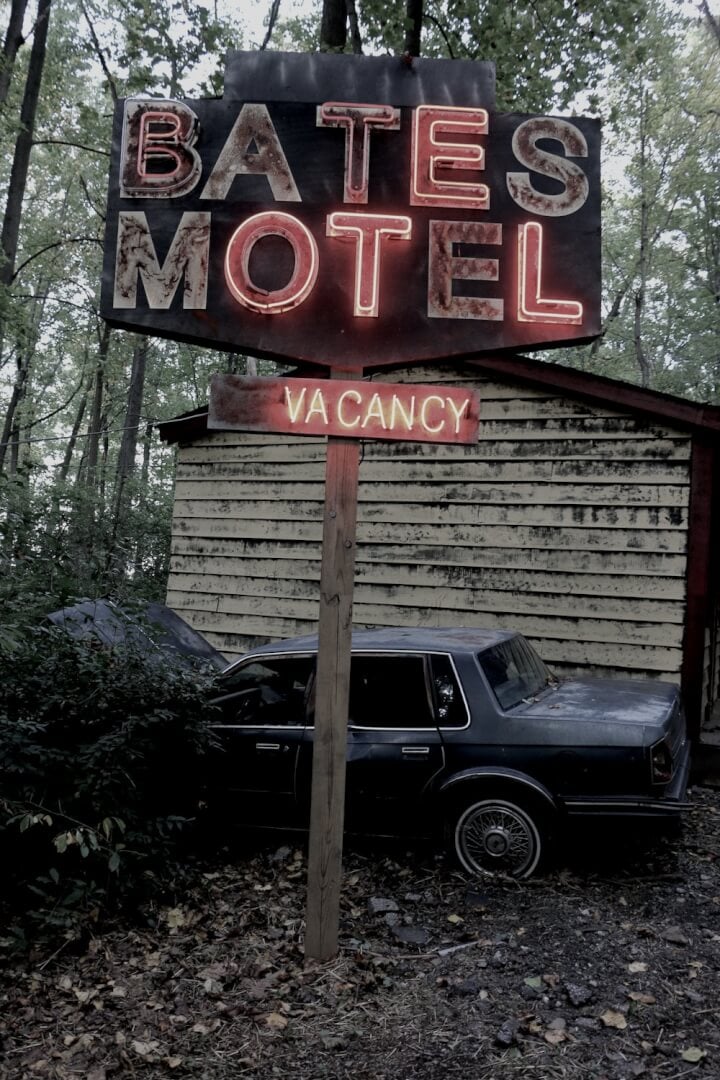 Don’t let the name fool you. Bates Motel has nothing to do with Hitchcock’s “Psycho” or the more recent “Bates Motel” TV show. Owner Randy Bates has a claim to his attraction’s name, since it uses his actual last name. And though its hayride does feature a questionably similar motel moment – we’ll call it a tribute – the majority of Bates Motel is fueled by pure Halloween insanity.

Bates Motel is a multi-attraction event, featuring an elaborate walkthrough haunted house, a corn trail (not really a maze), and a haunted hayride that’s made national attention many times over via Travel Channel specials every Halloween.

It deserves the attention too, as the haunted hayride is definitely a grandiose adventure. With humongous set pieces, singing pyrotechnics, giant animatronics, and a huge cast of actors that just love messing with guests, this ride screams Halloween – while causing plenty of screams of its own. In short, it’s simply fun.

Take a ride through the Bates Motel haunted hayride highlights in the video below, including their newest scene for 2014 that has a steampunk flair.

Equally impressive is the Bates Motel haunted house. Its creepy exterior, complete with hearse and animatronic attack dog, sets the stage nicely for the wild walkthrough within. Special effects fill nearly every scene inside, with furniture and people levitating across rooms, actors leaping up and over guests’ heads, and many more surprises. The walkthrough winds in and out of the house, which is basically a home for spooks of all sorts. It’s a surprisingly long experience in a seemingly tiny footprint, packed with plenty of scares throughout. Walk through the Bates Motel haunted house in the video below to see a sampling of its startles.

The least interesting of the Bates Motel trio of attractions is their corn maze, which is really a corn trail. Guests follow a linear path, winding through corn stalks to encounter individually themed scenes along the way. It’s a long walk that has a great traditional northeastern Halloween feeling to it, but simply goes on for too long. It has its moments of greatness, like walking through a mini haunted house, an hilariously hideous clown circus, and even over a swamp.

See some highlights of the corn trail in the video below to get a good feel of what experiencing Halloween in Pennsylvania is like.

The style of haunting that happens at Bates Motel and other northern independent attractions is decidedly different than that of Florida, California, or anywhere else. Each region has its own familiar elements that seem to be shared between local events. But Bates Motel stands out among the best in Pennsylvania, continuing to add inventiveness each year.

More information can be found at TheBatesMotel.com.

Check back to Outside the Magic after Halloween for a behind the scenes look at the entire Bates Motel experience.