“Halloween” is truly here at Halloween Horror Nights 24 as Universal Orlando brings guests face to face with Michael Myers – over and over again.

Transforming the 1978 classic John Carpenter film into a walkthrough experience was a long-awaited task for Entertainment Director Mike Aiello. He remembers being haunted by “The Shape” after seeing the film at a young age, wondering when Myers would appear outside his bedroom window. Now, he and the Horror Nights team are ensuring every fan gets to experience that iconic head tilt just moments before they are assaulted by the original knife-wiedling killer. 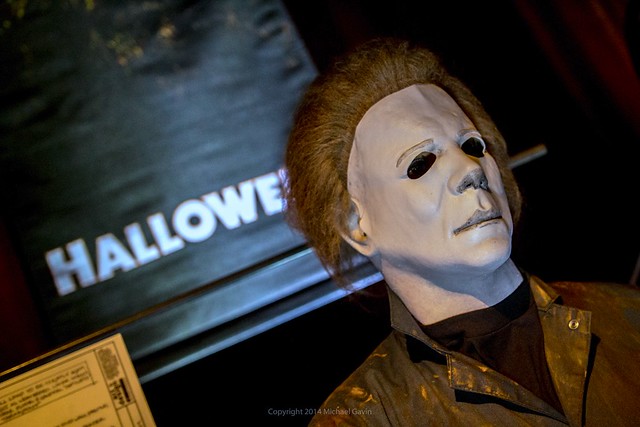 This week, Universal Orlando previewed the costumes, makeup, and characters of Halloween Horror Nights 2014. In addition to marveling at this year’s exciting visuals, I had the opportunity to take on the “Halloween” haunted house – four times.

In short, the maze is fantastic – an excellent recreation of the most memorable scenes from the original film. It has a great ’70s feel with many surprise appearances and uses of Michael Myers. It’s never repetitive with fun vignettes that are both cinematic and startling. And the fact that it’s all contained within a backlot tent is even more impressive, as it gives the impression of walking between different houses. It does “Halloween” justice.

Sadly, photos and video recording were not allowed inside the house at this year’s press preview. So for those who want to know all the gory details about what goes on inside, below I provide a scene-by-scene description accompanied by matching stills from the film, faithfully recreated in the haunted house.

Before getting into the description, it’s possible a few of the scenes below are out of order. In fact, it’s likely. This is a rather disorienting maze, passing through similar environments throughout. Or… maybe I purposefully wrote them out of order to throw you off when you walk through. You’ll never know.

It begins on the outside of the Myers house, an impressive facade that looks lifted directly from the film. It’s enhanced by special effects – projections mapped to its exterior. Michael Myers is seen in a window, knife in hand, along with a crumbling effect and a giant logo. The sequence was still being worked on during preview night, but should offer some great entertainment for those waiting outside.

After passing by through wooden fences, you enter the house of a young Michael Myers, who appears quickly as a clown, knife in hand – naturally. A dead, half-naked woman lies on the stairs nearby. And so the nightmare begins.

Visions of Michael Myers lurking at the top of the stairs immediately enter any “Halloween” fan’s head upon reaching this point. The first full Michael Myers appearance immediately follows. You might think you see him, but it’s just a reflection in a mirror. And as soon as he spots you, he’s coming. Below is the only image Universal has released from within the actual haunted house. From this point forward, Michael Myers is in almost every scene, each time appearing from a surprising place in a unique way – always with an ear-piercing shrill of a sound, accompanied by the film’s rousing score. It’s effective to keep everyone on edge.

The next appearance from Myers takes place in a garage, in which a girl is seen screaming and flailing as she’s getting attacked from the back seat. It’s a huge, highly detailed scene.

Passing from one house to another, you walk through a yard with clothes draped on a clothes line. This sequence of moving between houses happens a few times throughout the maze.

Myers’ famous head tilt comes in full force as you walk into a kitchen – a scene that is duplicated identically from the film. The movie still below might as well be a photo from the maze. But this time, after the head tilt, the scene does not cut. Instead, Myers turns to you and lunges. Winding hallways follow as Myers appears from dark corners and behind doors.

And soon, he dons his famous “sheet” look, producing some of the most memorable and surprising scares. Yes, the telephone choke is there – though without nudity. The bedroom tombstone scene is faithfully recreated from the film as well, with a surprise Myers scare coming from a corner.

I almost never jump in haunted houses anymore, accustomed to all the tricks. But one of my four back-to-back trips through this “Halloween” maze got me as Myers appeared in full form from behind what I thought was him standing there as a sheet. Yes, even I jumped – a little.

The bright strobes of that scare are also especially effective as the scene that follows is nearly pitch black, except for the flashes of light that illuminate at least 7 Michael Myers figures – some static, some real. For those who remember the Dead Exposure house a few years ago, it’s quite reminiscent of that. And it’s just as effective.

The best instance of “The Shape” takes place nearby. Turning a corner, you see hanging clothing and a dangling incandescent light in a tight space. And at the end of this short hallway, Michael Myers stands there, staring… his head tilts… and maybe he attacks, maybe he disappears. It’s a perfect moment.

Heading outside, a bit of “Halloween 3” enters the maze as masked kids don Silver Shamrock costumes, jumping out from behind sheets yelling “trick or treat!” It’s loud and indeed startling. After a winding “battle” with Myers as he seems to chase you around every corner, even popping out from within a broken hole in a fence, it’s time for the final showdown.

But Myers appears from behind, attacking her and then you before retreating. It’s truly a faithful retelling of the “Halloween” story, both reenacting scenes as well as putting guests in Myers’ way.

Again, the above scenes may or may not be in order. Probably not. And there are definitely many details left out, as not spoil it all.

I highly recommend going back and re-watching (or watching for the first time?) the original “Halloween” film. It may seem a bit slow by today’s Hollywood standards, but it is indeed a horror classic that has been translated into a fun Halloween Horror Nights experience.

Below is the original trailer, to get you started. That shrill at the beginning? Yep, that’s in the maze… many times.